Rickettsia typhi is a small Gram-negative rod bacteria. Therefore, it has an outer membrane and a thin murein layer. Murein is a strong polymer found in the cell walls of prokaryotes. Lipopolysaccharides which are unique to bacteria can be found on it’s outer membrane as well(6). Rickettsia typhi is the cause of murine typhus. A terrible disease, this endemic typhus or murine typhus is much milder than the epidemic typhus caused by R. prowazeki. Infection causes headache, fever, and can lead to multisystem disease, including infection of the brain, lung, liver, kidney and heart. Humans become infected when the flea or tick deposits its feces on the human's skin(1). 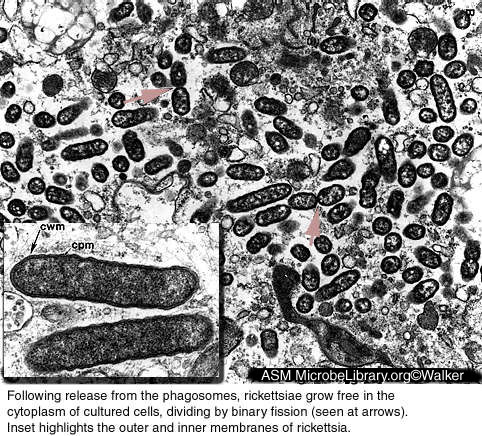 The complete genome sequence of R. typhi is 1,111,496 base pairs. There were 877 genes, 838 encode proteins and 24 were unique to R. typhi(5). The Guanine + Cytosine(G+C) content in its DNA is roughly 29-30% of it's DNA. R. typhi's genome size is 1080 Mdaltons and it has the typical prokaryote circular chromosome(3). Currently, no plasmids have been found in this microbe.

Rickettsiae thrive in environments with a high concentration of potassium an a low concentration of glucose(sugar), usually this is the cytosol of eukaryotic cells. Cell membrane transport systems are used to acquire molecules such as ATP(energy) and amino acids from the host(3). This is one of many ways this microbe exploits its host. Its inability to maintain concentrations of essential nutrients like ATP, make R. typhi relatively non-motile. This non-motility allows for accumulation of the microbe in the host cell, which causes the cell to lyse/burst(2). However, they also have an independent metabolism where they can produce their own ATP and proteins. Rickettsiae enter the cells by phagocytosis, a process where a microorganism enters a cell through it's membrane. Later they escape and replicate in the cytoplasm of other cells.

Humans are affected by this because ticks/fleas can carry this bacteria, spreading typhus. Although typhus can be found worldwide, it is mostly present in warm coastal areas. Typhus is uncommon in the United States. It is usually seen in areas where hygiene is poor. In the past, spread of typhus created many sick people, and determined the outcome of some wars.

Rickettsia typhi can be transmitted to the host by the bite of an infected arthropod(tick or flea) or through the feces of the carrier, causing typhus. In people, typhus causes fever, chills, headache, and general pain. In the endothelium tissue is where the microbe divides and transmits its infection(4). The microbe accumulates then the host cell bursts releasing many rickettsia. Destruction of the endothelial cell causes damaged tissue, organs, and loss of blood. Sometimes a rash is found on the body. The disease is diagnosed through blood testing. Anti-biotics are made to enter the host cells and aid in decreasing the effects or R. typhi. Some medications made are doxycycline, tetracycline and chloramphenicol. Prevention of the disease is through rodent and flea control.

Murine typhus is caused by R. typhi, however no other useful compounds or enzymes have been found from this microbe that are useful to biotechnology. Its ability to be acquired via aerosol, its painful sypmtoms, and its rate of infection make rickettsiae a potential bioweapon and bioterror agent.

Rickettsiae cannot be cultivated on an artificial medium in the lab. The organism must be grown in other ways such as in animals or cell cultures. Currently, different oraganisms and different environments are being tested to find different ways to cultivate this microbe. Also, this microbe affects the pesticide industry, for developments of insecticides and rat control are being made to decrease the probability of typhus occurring.