A Microbial Biorealm page on the Ruminococcus 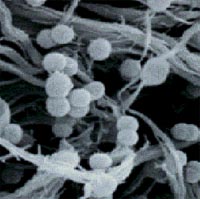 Work has been started on the Ruminococcus genome structure. In 1995, the genome of Ruminococcus flavefaciens plasmid pBAW301 was sequenced. In 2004, Rincón et. al. discovered a new gene, scaC, in R. flavefaciens. This gene is part of a cluster that codes for ScaA and ScaB, which are components of the cellulosome. 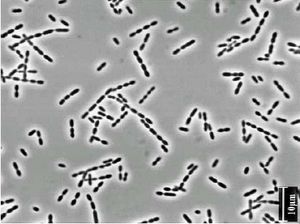 Ruminococcus are non-motile organisms with a coccoid shape.

Ruminococcus are anaerobic bacteria. They obtain nutrients by breaking down cellulose that comes through the digestive system of the host organism. These organisms are also capable of fermenting glucose and xylose.

Ruminococcus do not produce spores.

Ruminococcus inhabits the rumen of cattle, sheep, and goats. These organisms allow their hosts to digest cellulose. Ruminococcus' cellulose degredation abilities are currently a major area of study. By understanding how these organisms degrade cellulose, farmers may be able to make advances in animal productivity. In addition, this knowledge could have an environmental impact. It has been suggested that scientists could develop better methods of recycling paper and wood materials.

Simmering et. al. (2002) proposed a new species, Ruminococcus luti, found not in the rumen of cattle, but in human feces. These bacteria are found in chains of up to ten cells. It does not appear to be pathogenic. Cellulolytic Ruminococcus spp. are also detected in many gut habitats including the rumen of goat, sheep and cows and the hindgut of horses, pigs and wild mammals as well as in the human large intestine.