Difference between revisions of "SARS-CoV nsp7 and nsp8"

SARS-CoV nsp7 and nsp8 are non-structural proteins that are involved in the replication and transcription of the SARS coronavirus. 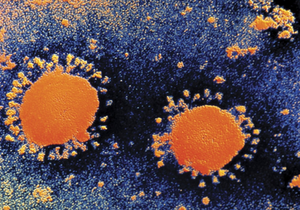 The outbreak of SARS in Hong Kong almost caused an pandemic and created a worldwide panic. From late 2002 to July 2003, there were about 8,273 cases and 775 deaths. People who were infected reported muscle pain, headache, fever as well as respiratory symptoms such as cough and pneumonia. The disease is known to infect older people with mortality rate the highest for those over 50 years old. Also known as severe acute respiratory syndrome, SARS has not been eradicated and can return to infect the human population. Since no antibiotics, antivirals, steroids, and therapies are known to be effective against this viral disease, it has become a top priority for the government and public health scientists around the world to identify and develop vaccines and medicine to prevent another outbreak. (3)

Severe acute respiratory syndrome is caused by a SARS coronavirus (SARS-CoV). SARS-CoV is a positive strand RNA virus that causes respiratory and enteric disease. Viral replication of the coronavirus genome replication takes place in the cytoplasm. Infection by the coronavirus can alter cell cycle, transcription and translation pattern as well as induce apoptosis and inflammation. SARS-CoV was identified by a number of laboratories to be the main cause of SARS. In April 2003, Michael Smith Genome Sciences Centre, located in Vancouver, became the first lab in the world to sequence the coronavirus that causes SARS using samples from infected patients in Toronto. The mapping of the SARS-CoV is a step forward to fighting SARS. With this sequence, scientists can begin to understand more about the coronavirus structure, function and genome replication as well as begin antiviral research against SARS coronavirus. (2)

The discovery of the SARS-CoV has propelled extensive studies on its viral replication. Although the emergence of SARS-CoV have been extremely important towards finding a treatment for SARS, little is known about its replication machinery. However, scientists have learned more about SARS-CoV through the discovery of its non-structural proteins 7 and 8 (nsp7, nsp8)), which have been identified to be involved in the coronavirus replication and transcription. Furthermore, the interaction between nsp(7+8) is important for RNA-dependent RNA polymerase (RdRp) activities of the SARs-CoV genome. By understanding the structures of these non-structural proteins, scientists are one step closer to decipher the mechanism of SARS-CoV genome replication and may even use them to develop new strategies for the prevention or treatment of SARS in animals and humans. (2,4,5,6)

Structures and interactions of nsp7 and nsp8

The structure of the supercomplex resembles a hollow cylinder with a central channel that has two handles protruding from opposite sides. It is assembled from eight copies of nsp8 and bound tightly together by eight copies of nsp7. nsp7 is an alpha helical protein of about 10kDA. It has single domain with a novel fold that consists of five helical secondary structures. The interhelical side-chain interactions that stabilize and hold the helices together have residues that are predominantly hydrophobic. nsp7 localizes to cytoplasmic membrane structures that are also known to be the sites of viral replication in infected cells. SARS-CoV nsp7 dimerizes and interact with other protein such as nsp5, nsp8, nsp9 and nsp13. nsp7 central core consists of an N-terminal helical bundle (HB) that contains helices HB1, HB2, and HB3. Its HB region is conserved and is known to interact with nsp8. nsp8 has a molecular mass of about 22kDa and is unique for coronaviruses. The four monomers of nsp8 have two different conformations: nsp8I and nsp8II. nsp8I is described as a “golf-club” like structure composed of an N-terminal “shaft” domain that contains three helices (NH1-3) and a C-terminal “head” domain while nsp8II 2 has a similar head domain, but its shaft helix NH3 bends into two shorter helices. The N-terminal is also revealed to be highly conserved, suggesting that its domain may have an important role in the interaction with other molecules or complexes. (2,6)

Interactions between nsp7 and nsp8 form the supercomplex. nsp8I and nsp8II bind tightly to nsp7, which causes the formation of two types of heterodimers, D1 and D2. Hydrogen bonds are also formed between the side chains of nsp8 and nsp7. There are two main sites in the supercomplex of the non-structural proteins. The first site is placed within the C-terminal complex of the shaft domain of nsp8. Here, residues of the NH3/NH3 beta helix of the nsp8 and on the HB1 helix of the nsp7 form the hydrophobic core. Site 2 is found in the CH1 helix of the nsp8. The helices of nsp7, HB3 and HCT, form interactions with the CH1 helix. The side chain and the main chain carbonyl group of nsp8 forms hydrogen bonds with the main chain carbonyl group of nsp7. (6)

There are two RdRp activities that are believed to be involved in replication of SARS-CoV genome. The first activity involves the 106-kDa nsp12 while the second polymerase involves the 22-kDa nsp8. nsp8 is unique for CoVs and is the only protein reported to be capable of de novo RNA synthesis. De novo synthesis is the synthesis of complex molecules from simple molecules. The supercomplex of nsp7 and nsp8 is known to be a unique RNA polymerase. Although nsp8 is capable of RdRp activities on its own, it is known to co-crystallize and form a unique hexadecameric ring-structure with nsp7. Aartijan J.W. te Velthuis et al., studied the relationship of nsp7 and nsp8 complex to RNA-dependent RNA polymerase (RdRp) activities for the RNA virus, SARS-CoV. They found that exposure of nsp8’s natural N-terminal residue was important for its ability to associate with nsp7 as well also boosting its RdRp activity. (4)

To examine whether nsp7 improve nsp8’s function and capability to bind to RNA, measurement of dsRNA was measured using fixed concentration of nsp7 with either wild-type or mutant nsp8. Without the presence of nsp8, no RNA binding was observed. However, the presence of the formation of the nsp(7+8) complex created an increase in the number of bound dsRNA. Furthermore, increase in the bindng affinity for RNA was also observed for nsp8 RNA-binding mutant K58A and D52A. These results show that the addition of nsp7 must have evolved to enhance RNA binding by nsp8. (4)

Interaction of the nsp7 and nsp8 with double stranded (ds)RNA

The structure and interaction of the nsp7-nsp8 supercomplex covey that its role is to bind nucleic acids The inner channel of the complex has positive potential while the outer surface is covered by negative potential. This charge distribution allows the phosphate backbone of nucleic acids to pass through the channel without electrostatic repulsion. The hollow cylindrical structure of the supercomplex also helps to facilitate coronavirus replication. Replication of the coronavirus occurs in the cytoplasm of infected cells and double (ds) RNA intermediate is required for the replication of SARS-CoV during RNA synthesis. The hollow cylindrical of the supercomplex helps with the coronavirus replication, encircling and stabilizing the dsRNA by holding the nascent and template strands together for transcription and replication. Furthermore, the high conservation of nsp7 and nsp8 in coronaviruses indicates that they are a general component for all coronaviruses. The discovery that dsRNA and the supercomplex is a natural binding partner can be useful for antiviral research for SARS. Peptides compounds can be designed to mimic the interaction between nsp7 and nsp8 to prevent the supercomplex from forming as well as to prevent the replication of SARS-CoV. The structure of the supercomplex can also be used to design drugs to treat SARS. (2,4,6)

The future of SARS-CoV nsp7 and nsp 8 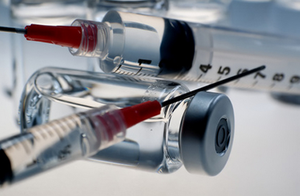 Although discovery of these non-structural proteins have allowed scientists to examine the replication mechanism of SARS-CoV, more experiments are needed in order to better understand the function of nsp7 and nsp8. For example, there are two RdRp activities, with either nsp 12 or nsp(7+8), that are involved in the replication of SARS-CoV genome. However, not much is know whether these two polymerase activities are within the same enzyme complex or whether they can influence each other's activity.

Since nsp7 and nsp8 are known to be important to the replication of SARS-CoV, it is also important for future research to study how they can be used to treat diseases that are caused by this virus. It is crucial to begin intensive antiviral research using nsp7 and nsp8 as models to develop drugs and vaccines since SARS has not been eradicated and a potential outbreak may occur in the future.