Saccharomyces pastorianus is a bottom fermenting yeast where it forms foam at the bottom of the wort. These yeasts ferment more sugars producing a crisper taste which is often found in lager-type beers. Yeasts are fungi which grow as single cells, and create daughters through budding or binary fission. The general habitat for S. pastorianus is a moist environment with a multitude of nutrients especially sugars as well as a necessity for amino acids, however if there is a lower amount of sugar S. pastorianus can grow with the presence of calcium ions. It also can grow in the same habitat as top fermenting yeasts with or with out the presence of oxygen. S. pastorianus strongly believe to be a hybrid of S. bayanus and S. cerevisiae. The contribution of each parent species allow S. pastorianus to survive in the cold lager fermentation which is why S. pastorianus is particularly important in the fermentation of crisp lager beer. S. cerevisiae which is used for producing the sweeter and often fruitier flavored ale grows at a temperature between 16 °C and 24°C, and S. pastorianus typically prefers temperatures between 6 °C and 12 °C. While there are extensive uses for Saccharomyces yeasts there is still little known about their natural habitat, because S. pastorianus has been adapted to survive on man-made fermentation.

S. pastorianus has one circular DNA with a length of 70,578 nucleotides and it includes nine genes which codes for nine proteins. Due to being a hybrid of both S. bayanus and S. cerevisiae, S. pastorianus has a genome size which is 60% larger than that of S. cerevisiae and includes large parts of each genome. Growing evidence provides belief that the majority of its genetic material comes from S. bayanus, because the mitochondrial and ribosomal DNA seemed to be derived from S. bayanus. S. pastorianus and S. bayanus share the ability to break down melibiose which is dependent on up to ten MEL genes and these genes are exclusive to strains with the ability to metabolize melibiose. It has also been discovered that the S. pastorianus isolated from different breweries have unique genomic make-up which possibly indicates that the yeast is adapting to the conditions that are unique to each brewery. Its entire genome has been sequenced and can be found in the Genbank database.

Saccharomyces pastorianus is an elongated, elliptical eukaryotic cell. It has the potential for mycelial-like structure formation under proper conditions. The life cycle of this strain can be categorized as haplodiplobiontic. Budding produces multiple generations of the yeast prior to the reinitiation of copulation. The strain will undergo both budding – as a means of reproduction – and sporulation. In sporulation, an asci is bore without any fruiting body. Each asci is separately formed, with zygotes forming into asci and diploids into ascophores.

Flocculation, the accumulation of the yeast as it precipitates out of solution, has a unique mechanism in Saccharomyces pastorianus as it is a bottom-fermenting yeast. During the stationary growth phase, lectins emerge from the cell surface and bind to one another. This occurs only once the concentration of sugar in the surrounding aqueous solution is low enough, as high sugar concentrations inhibit flocculation. The pH must also be in a range just above the isoelectric point and cells must be in the presence of calcium. Another unique feature of the cell is that it is believed to be an allopolyploid. It contains multiple sets of chromosomes from different species.

The appropriately named Saccharomyces pastorianus – saccharomyces from the latin for “sugar fungus” – utilizes sugars during metabolism. The catabolism of sugar is crucial to the survival of the yeast, though it has an affinity for glucose or maltose – which is broken down into glucose monomers by enzymes during the malting process of fermentation. In aerobic conditions respiration occurs and the cell creates energy via glycolysis and the citric acid cycle. These pathways become the mechanisms for ATP production. In the absence of oxygen, anaerobic fermentation takes place. The carbon taken in by the cell is utilized not only by glycolysis, but also in the synthesis of proteins and lipids.

During aerobic respiration, the cell produces carbon dioxide as a by-product of the citric acid cycle. When anaerobic fermentation occurs, a greater variety of molecules are made. Glycerol, succinate, organic acids, and ethanol are also produced. The production of ethanol is crucial to the role of Saccharomyces pastorianus as a lager yeast strain. This provides the alcohol found in fermented beverages like beer, making this yeast of value to humans. 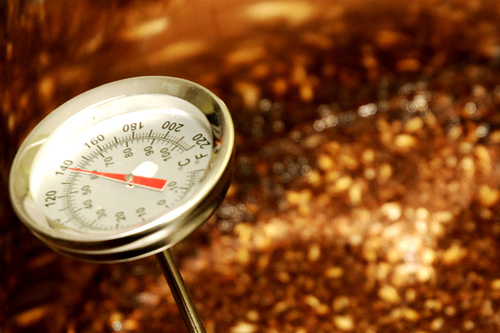 Saccharomyces pastorianus is considered to be more tolerable of the cold than its relatives, such as Saccharomyces cerevisiae. It can live at much lower temperatures, undergoing fermentation at temperatures as low as 5°-14° C. During the fermentation process, the habitat of the organism undergoes changes, seeing a decrease in pH, an increase in alcohol concentration in the surrounding environment, and a depletion of nutrients in the form of carbon and nitrogen as fermentative processes take place. This yeast requires a carbon source in the form of sugar to grow – it is a sugar-loving organism. As such, it is typically found growing on the skins of fruits or other carbohydrate substances.

Few symbiotic relationships have been observed, although it may be that multiple strains of yeast live together in a mutually beneficial relationship. Strains of Saccharomyces pastorianus can be secondary fermenters in association with top-fermenting yeast strains.

Saccharomyces pastorianus is a hybrid of other yeast strains, of which one is definitely known. Saccharomyces cerevisiae is a parent of the strain, although there is speculation as to which other strains have been hybridized in the resulting yeast. It has also been speculated that the strain developed as an adaptive measure in response to the cold fermentation temperatures to which the yeast were subjecting during brewing. Studying the mechanism of this selective hybridization may have importance to the scientific community.

The importance of Saccharomyces pastorianus comes from its ability to act as a spoilage organism. This importance is two-fold, as it can be both unwelcome and beneficial. When uncontrolled, the yeast strain has a tendency to grow on the outside of sugary fruits, such as grapes. This causes a deterioration in the food, leading ultimately to spoilage. This is dangerous to the food system, as fruits contaminated with the yeast will prematurely decay.

However, in a controlled environment, Saccharomyces pastorianus can have desirable results. It causes food fermentations, leading to alcohol production in the fermentation of barley and wheat to make beer. The anaerobic metabolic pathways of the yeasts create ethanol as a product, altering the environment. This leads to preservation via consequent pH and compositional changes of the surrounding environment.