A Microbial Biorealm page on the Salmonella 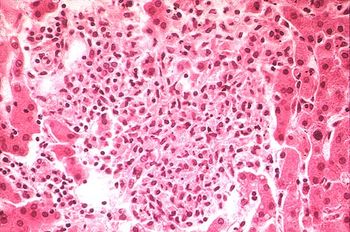 While the genus Salmonella consists of two species, S. enterica and S. bongori, diversity lies in the over 2,000 serovars that comprise S. enterica. An example of a serovar is S. typhi, which causes systemic infections and typhoid fever, yet is very host specific and will only infect humans, killing an estimated 500,000 per year worldwide. It has been observed to infect deeper tissue than many S. enterica serovars like the liver, spleen, and bone marrow. On the other side of the spectrum, S. typhimurium causes gastroenteritis and can infect many mammalian species. Study of Salmonella genomes, especially S. typhi, might give insight into possible targets for drugs to attack to help cure diseases (typhoid) and for a vaccination.

Salmonella typhi CT18 has a large circular chromosome consisting of 4.8 Mb and two plasmids, pHCM1 and pHCM2, that are 218 kb and 106 kb respectively. Plasmid pHCM2 is closely related to the pMT1 plasmid of Yersinia pestis, but lacks the capsular antigen operon and murine toxin genes that are characteristic of pMT1. The current vaccine was developed using S. typhi Ty2, which consists of one large chromosome that is 4.7 Mb. It is not associated with any plasmids that have multiple drug resistant bands like strain CT18. S. typhimurium is a circular chromosome 4.8 Mb long with a 90 kb plasmid pSLT.

S. typhi CT18 has 204 pseudogenes, nine of which are intact genes in strain Ty2. Along with the 195 pseudogenes in common with CT18, strain Ty2 also has 11 unique ones. More discrepencies are found when looking at prophages. Four prophages are located in identical parts of the genome relative to the adjacent nonphage genes, and both strains contain parts of prophages that are unique to one another. Even with those differences, the genomes of the two strains are more than 98% similar, and, unlike the Y. pestis strains KIM and CO92, the organization of the two genomes is very similar.

Salmonella bacteria are very common on raw egg shells, in poultry, and red meat; it is also a natural part of the bacterial flora of reptiles and amphibians. Fortunately, proper food handling, cooking, and cleaning kills Salmonella; still, it can probably found in most kitchens. In addition to these common habitats of Salmonella, contaminated water is one of the major sources of Salmonella contraction worldwide. 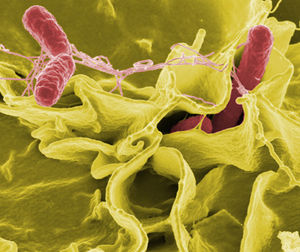 Salmonella species can cause diseases ranging from gastroenteritis to typhoid fever, and can be transmitted through the ingestion of contaminated food or water. Upon entering the host cell there is an increase in the levels of intracellular free calcium as well as a rearrangement of the cell cytoplasm. Salmonella also ruffles the membrane, which appears to be an important part in the entry process. The most common Salmonella infections (generally by Salmonella enterica serovar Enteritidis) generally cause diarrhea, fever, or abdominal cramps. Salmonellosis can usually resolve itself without treatment 5-7 days after infection unless the host becomes severely dehydrated or if the infection spreads. While it generally can be treated with ampicillin, gentamicin, trimethoprim/sulfamethoxazole, or ciprofloxacin, some of the bacteria have become resistant to certain antibiotics as a result of using antibiotics to promote the growth of feed animals. Although most people with this type of Salmonella infections usually recover completely, a small amount of people develop Reiter's syndrome which causes pains in their joints, irritation of their eyes, and painful urination. This syndrome can last for months, years, or can even lead to chronic arthritis (CDC).