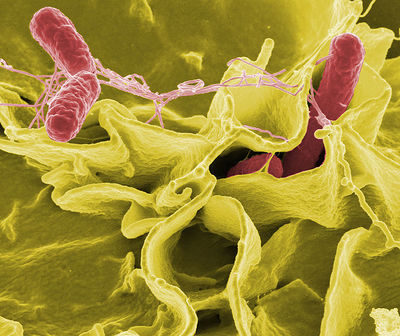 Salmonella typhimurium is a Gram negative, non-spore forming bacillus-shaped bacterium. These facultative anaerobes are predominately motile with peritrichous flagella. Salmonella typhimurium, in particular, cause gastroenteritis in human hosts. [14] This organism is easy to identify in a laboratory setting. All Salmonella species are oxidase negative, and the majority are lactose negative and produce hydrogen sulfide. [11] Salmonella can be acquired by eating or drinking contaminated food or water and is especially common on turtles and poultry. Salmonella enters the body through ingestion and then makes its way through the stomach acid to its niche in the intestines. Since Salmonella does not contain an acid virulence factor, many of the bacteria are killed as they pass through the stomach. This is why an approximate dose of 100,000 bacterial cells must be ingested in order to cause disease. In the intestines, there are many bacteria that have already colonized.Salmonella has many adhesion factors that allow it to better adhere to the mucosal layer. Approximately 94 million Salmonella typhimurium infections are reported per year, along with 155,000 deaths. The disease is characterized by severe abdominal cramping, vomiting and diarrhea. In order to further confirm a Salmonella typhimurium infection, a stool sample or blood sample is taken for culturing. After confirmation of a severe infection, approved antibiotics may be prescribed. To prevent Salmonella, use caution when handling raw meat by washing hands and surfaces thoroughly. [8]

Salmonella is generally transmitted by the fecal-oral route. Generally this occurs through the improper handling of contaminated foods. Foods most often contaminated include raw beef, poultry, eggs, unpasteurized milk, and vegetables. To prevent transmission it is advisable to keep food properly refrigerated before cooking, clean hands with soap and water before handling food as well as clean surfaces before preparing food. When dealing with potentially contaminated foods, one should seperate cooked foods from ready to eat food items. Additionally utensils or cookware should not be used after contact with contaminated foods until they have been properly sanitized. Food should be cooked to a safe internal temperature by using a meat thermometer to ensure this. [12] Salmonella can also be transmitted zoonotically via birds. Other reported cases were contracted from pet turtles, lizards, and snakes. [8] Additionally, Salmonella can be isolated from 18-36% of healthy dogs and cats. After diagnosed with the infection, dogs and cats tend to shed Salmonella organisms for prolonged periods of time. These animals can shed the bacterial strain in their feces and saliva meaning that transmission can occur via licking. Dogs and cats may suffer from Salmonellosis as a reverse zoonosis with infections transmitted from human-to-dog and subsequently back to other humans. [13] Salmonella can be passed from one person to another through poor oral hygiene. It can be passed from one person to another by not properly washing hands after using the bathroom or changing a diaper. [1]

After Salmonella bacteria are ingested they pass through the gastrointestinal tract, avoiding the gastric mucosal barrier to invade the mucosa of the small and large intestines where they begin to produce AvrA toxin which suppresses the host’s innate immune system. [9] The invasion of Salmonella into the host’s intestinal cells causes the release of proinflammatory cytokines by the host’s immune system which induce the inflammatory response, leading to severe diarrhea. [10]

The number of Salmonella organisms that need to be ingested in order to cause disease in a human host is approximately just over 100,000 bacterial cells. [11] The incubation period, or the time it takes for an individual to present with symptoms after ingestion, is between 12 hours and three days. [4] 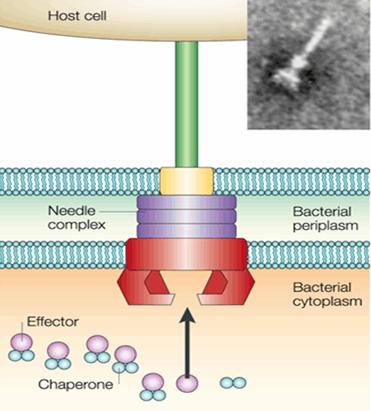 Salmonella bacteria possess a number of virulence factors that contribute to its pathogenesis. Salmonella invades the epithelial cells of the human intestines using a type three secretion system (TTSS) to inject its outer proteins into the host's intestinal cells. The TTSS is a needle-like structure that helps the bacteria find the host and then insert effector proteins. As soon as the needle comes into contact with the host cell it starts secreting these effector molecules. The host cell then engulfs the bacteria, consequently allowing the bacteria to reproduce and cause infection. The effectors that are inserted into the host cell signal the host to take-up the bacteria. This happens by the effectors taking control of the actin polymerization process. The actin polymerizes to the point where it causes the host cell wall to begin to raise on either side of the bacteria. Once the bacteria is surrounded on all sides by the cell wall it is engulfed into the host and encased in a vesicle. Salmonella mature within the cell inside of "Salmonella containing vacuoles" (SCVs) thereby evading the host’s immune response. Additionally, Salmonella bacteria have at least 16 adhesion factors which allow them to better adhere to the intestinal epithelium. [8][14] Salmonella has acquired at least 5 SPI's (Salmonella Pathogenicity Islands) via horizontal gene transfer which contribute to its virulence. Specifically, SPI-1 and SPI-2 are the main contributors to Salmonella's virulence. In addition to its pathogenicity islands, Salmonella, like all Gram-negative bacteria, are surrounded by an outer membrane containing lipopolysaccharide (LPS). Salmonella lipopolysaccharide contains the lipid A endotoxin which, upon release, can cause shock in the host. Another virulence factor of Salmonella its ability to synthesize enterobactin. Enterobactin, the strongest siderophore known, secreted by Salmonella allows it to commandeer iron from the hosts body which it can use for growth within the host. [14]

In the United States, approximately 40,000 cases of Salmonella typhimurium are reported annually, with 400 deaths occurring per year as a consequence of these infections. Worldwide, 93.8 million cases of Salmonella occur annually, with 155,000 reported deaths. [1][2] In 2013, there was an outbreak of contaminated ground beef and poultry. In that outbreak 22 people were infected with a strain of Salmonella typhimurium , which was reported in six states. Approximately 50% of people were hospitalized and no deaths were reported. Collaborative investigative efforts of state, local, and federal public health indicated that ground beef produced by Jouni Meat Inc. and Gab Halal Foods were likely the source of the outbreak. Jouni Meat Inc. recalled 500 pounds of ground beef products on January 24th, 2013, while Gab Halal Foods recalled 550 pounds of ground beef products on January 25th, 2013. With regards to the live poultry, a total of 271 people were infected with the outbreak of the Salmonella typhimurium strain. The outbreak was reported in 31 states, but no deaths occurred. 27% of the infected people were hospitalized, while 62% of the infected people were children 10 years of age or younger. [15]

The symptoms of Salmonellosis generally appear 12 to 72 hours after infection. The symptoms of Salmonellosis include self-limiting diarrhea, fever, abdominal cramps, and vomiting. Symptoms generally persist for 4-7 days after infection. In immunocompromised individuals, specifically infants and elderly patients, the diarrhea may become severe enough that the individual must be hospitalized in order to replenish fluids and electrolytes via IV. Although most symptoms in non-high-risk patients will fade a week after the initial infection, it may take months to re-establish the normal gut microbiota of the digestive tract. [3[4]

Salmonella typhimurium can be detected through sterile samples. The bacteria can also be detected in the blood, urine or tissues. These tests consist of growing the bacteria in pure culture. [5] Diagnostic identification can be obtained by the growth of the bacteria on MacConkey agar and Eosin Methylene Blue agar (EMB). Both of these types of media are designed to grow gram-negative bacteria and differentiate for lactose fermentation. The test results for both of the media will appear colorless and translucent, which indicates that the bacteria is lactose negative. Salmonella typhimurium produces no gas when grown in TSI media which is used to differentiate it from other Enterobacteriaceae. [6] A fecal, blood, or other sample is placed on the agar and incubated for two to three days. After that time, the specialist can properly identify the bacteria and confirm the identity by looking at the specific biochemical reactions. [5]

Salmonella typhimurium strains usually do not require treatment other than oral fluids, and the infection can usually be resolved in 5-7 days. One severe diarrhea may require rehydration with intravenous fluids. Antibiotics are not routinely recommended since they tend to increase adverse effects as well as prolong Salmonella strains detected in stools. Young infants and adults over the age of 65 are at risk for severe disease or complications. One who experiences severe diarrhea, high fever, bloodstream infection or one who needs hospitalized are recommended a prescription of antibiotics. Today, antibiotic resistance is a problem among Salmonella bacteria therefore susceptibility testing can guide appropriate therapy. Popular antibiotics used for the infection include fluoroquinolones, or third generation cephalosporins and ampicillin. [1]

There is no vaccine to prevent Salmonella typhimurium. Salmonella typhimurium can be traced to many dairy, poultry, and meat products. However, the most common sources where Salmonella is found are eggs and chickens. Salmonella can also be acquired through water and foods that have been contaminated with feces. To prevent Salmonella one should use caution when handling and storing raw chicken. Make sure to keep the raw chicken separated from all other meats. Also, preparation tops, cutting boards, and hands should be thoroughly washed before handling or preparing other meats to prevent cross contamination. One should also use caution when cooking eggs and meat to ensure they are cooked thoroughly and to a safe internal temperature for human consumption. [16] Additionally, water should come from regulated sources or be filtered to make sure it is free of Salmonella bacteria. Reptiles(especially small turtles) and birds are notorious for carrying Salmonella on their skin. Children, the elderly, and immunocompromised individuals should stay away from these animals to protect themselves from contracting the Salmonella bacterium. [1]

The mucus lining in the intestines serves as the first line of defense against invading pathogens. Other cells in the intestines also secrete amphipathic proteins that function like antimicrobials that create another line of defense against invading pathogens. As Salmonella typhimurium invades the mucosal lining, the host inflammatory response is activated. Salmonella typhimurium uses the type III secretion system to invade the epithelial cells in the intestines. There is a positive feedback immune response that occurs between the Salmonella bacterium and the host immune system. The PRR's recognize the Salmonella to induce a pro-inflammatory response of cytokines, chemokines, and lipid mediators. The presence of the cytokines triggers a cascade of proteins to be released from Salmonella that positively trigger more cytokines to be released. Cytokines trigger the assembly NLRC4/NLRP3 in Salmonella which then activates Caspase-1 which leads to the release of other specific cytokines. Those cytokines then trigger the release of chemokines which creates an influx of neutrophils to the mucosal lining. Those neutrophils are important in killing the extracellular Salmonella. However, because of all the signals that have occurred for an inflammatory response the neutrophils also cause damage to the epithelial cells leading to diarrhea. [17]

Created by Rachel Acosta, Taylor Zelnicek, and Magdalene Shaughnessy, students of Tyrrell Conway at the University of Oklahoma.