Difference between revisions of "Sarcoptes scabiei" 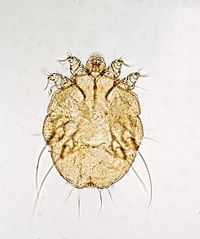 Sarcoptes scabiei is a microscopic, parasitic mite which infests the cutaneous layers of humans and animals. Sarcoptes scabiei is better known by its common name, scabies. Scabies is most popularly transmitted via human-to-human contact. Contrary to popular belief scabies cannot be transmitted via animal-to-human contact. Scabies is a world wide disease but is endemic in impoverished areas due to the lack of sanitation. People with weakened immune systems are more likely to contract scabies as well. Transmission of scabies from host to host is successful due to the latent onset of symptoms. Many do not even realize they have scabies until 4-6 weeks after infection. Thus, infected persons may successfully infect many others before they even notice their own symptoms. The <Sarcoptes scabiei organism achieves the latent presentation of symptoms by down regulating chemokine gradients so that the host immune response will not activate. Overall, scabies has been infecting the world for over 3,000 years and continues to persist. Mild treatment can easily kill the mite but reinfection is highly possible in the same environment.

Sarcoptes scabiei is transmitted via person to person contact. Usually prolonged contact is required for scabies to spread [1]. Consequently, household members and significant others are the significant mode of transmission. The most common source of infection in adults is from sexual partners. Scabies may be spread via inanimate objects such as clothing and bedding but the chances are significantly low because scabies do not survive for more than two-three days without human contact [1]. If the symptoms of scabies have become severe enough to cause crusted scabies, transmission via clothing and other articles increases significantly.

Sarcoptes scabiei is a parasite of the skin which lends to a low infectious dose because many times colonization only requires the transfer of one parasite. If the parasite transmitted is an adult female carrying fertilized eggs, colonization is almost always assured unless the parasite is washed off within a 30 minutes of the transfer period. Adult males hardly ever burrow accept to follow a female burrow path for mating purposes [2]. Before burrowing, Sarcoptes scabiei will crawl to bodily crevices such as the elbows, feet, ankles, hands, and genital area. The parasite will then burrow into host skin using its front legs and mouth to cut away the skin in a typical zig-zag pattern. As the female parasite burrows it will lay eggs along the way. An adult female will continue to lay 2-3 eggs a day for two months until it dies.

The life cycle of Sarcoptes scabiei is separated into four stages. Initially, the eggs will hatch into larvae within three days of being laid. The larvae will feed off of host hair follicles until it molts into an eight-legged nymph [2] At this point, all nymphs are destined to be males. If nymph molts another time, it will become a female. The first round of molting takes lasts for 10 days. If a second molting event occurs, then another 7 days is required to complete the female formation. Consequently, the females will be much larger than their male counterparts because they have nearly double the time to scavenge nutrients before complete development. Mating only occurs once in the lifetime of each parasite because the females can carry the sperm for two months while continually fertilizing new eggs. Soon after the two month fertile period the female will die.

Scabies epidemics have been reported for over 3,000 years in places throughout Asia [4]. Many factors are suggested to have affected the epidemiology of scabies such as changing social attitudes, population movements, and wars [5]. People worldwide are affected by scabies. The parasitic infection is spread across all social classes in all corners of the world. However, impoverished and crowded regions are more susceptible to infection. Specifically it has been noted that all scabies epidemics have stemmed from not only impoverished areas but areas with poor sanitation and water supply. Incidentally the two are usually linked. Each year around 300 million people are affected by scabies [3].

There is very little data concerning the virulence factors of Sarcoptes scabiei due to the lack of an in vitro culture system. Also, most affected people are only infected by about 12 mites at once. Thus difficulty also arises because scabies is such a low burden parasite. Tropomyosin, found to be localized in mite tissue, has been linked to host inflammation. Currently Sar s 14.3 is the most identifiable virulent factor. Via PCR amplification Sar s 14.3 has proved to be an allergenic protein. When Sar s 14.3 is present, in increase in IgE count occurs. Scabies extracts have also been proven to influence expression, mainly down regulation, of surface adhesion molecules and chemokine receptors [10]. This virulence method lends to a delayed inflammatory response. By delaying the inflammatory response, scabies is able to spread via person-to-person contact before symptoms ever present.

The clinical symptoms of Sarcoptes scabiei include intensely itchy lesions that often lead to further deleterious infections. The initial rash that presents during scabies infestation takes 4 to 6 weeks to develop thus clinical features mimics those of many other dermatological diseases. It is thought that the delay of symptoms allows for the parasite to spread to other hosts before the transmitting host even realizes infection has occurred. The rash presents in many forms such that it may resemble hives, mosquito bites, or pimples [8]. Itching of the affected area tends to occur most commonly at night keeping the infected host awake. The more deleterious diseases that result from the secondary effects of scabies are caused when infection develops in the sores created by scratching the primary rashes. Once the mite infestation progresses into its severe form then thick crusts form on the skin. Each of these crusts may contain 100 to 1000 mites and eggs [7]. Infection is a prevalent possibility at such an advanced state of infestation.

Scabies is hard to diagnose clinically and current methods such as serology tests have less than 50% accuracy [6]. New diagnostic testing which measures the specific IgE antibodies that are produced in response to the major scabies antigen Sar s 14.3 has proven to be very effective at detecting scabies. Specifically this antibody sensitivity test yields a 93.75 % diagnosis success rate. Most commonly scabies is diagnosed by rash appearance and distribution however this is simply a superficial form of diagnosis. Similarly an ink test may be used but is also regarded as a superficial form of diagnosis. An ink test is carried out by wiping ink on the affected area and removing the ink with an alcohol pad. If scabies burrows are present, then some of the ink will remain within the burrows. To confirm diagnosis, skin samples may be taken from the affected area and examined for presence of mites or their eggs.

Treatment of scabies is usually simple. Scabicide lotion or cream should be applied to all areas of the body if infection occurs. Scabicide lotion generally targets the mites however some target the mite eggs as well. Scabicide lotion is not to be used when body temperature is high so as to avoid absorption. Treatment should continue for seven consecutive days. Everyone within close contact to the affected person should be treated as well to prevent reinfection. Care should be taken to use clean garments after treatment begins.

Scabies is prevented by avoiding skin-to-skin contact with an infested person or with their personal items. If a person in the household is infested, it is recommended that everyone takes part in the treatment process to prevent reinfection. Thorough cleaning of all surfaces is recommended if a household member is affected with severe crusted scabies. Ultimately, prevention of reinfection is the most important factor in eradicating and preventing further infestation.

Every infected host presents with elevated levels of specific circulating antibody. The host also presents with elevated levels of C3 during infection [9]. C3 plays a central role in the innate immune system but also enhances B cell activation in the adaptive immune system. In the innate immune system, C3 activates the complement system. Specifically C3 will be cleaved by C3 convertase to produce C3a and C3b. C3a will cause inflammation which is characteristic of the affected scabies area. C3b will bind and opsonize the antigen surface. Eventually the adaptive immune response will be activated and B cells will attempt to fight the infection. B cells will present a specific IgE antibody which will trigger mast cell degranulation thus releasing histamine. Histamine is the main causative agent of host itching. The host immune response cannot clear a primary scabies infection on its own. However, immunological memory may be established preventing secondary infection establishment.

Written by Emily Kurtz at the University of Oklahoma