This locus has been discovered in a number of eukaryotic microbial species and controls mating type specificity. In the organism Cryptococcus neoformans the MAT locus expresses two mating types: a and α [8]. This locus occurs in two large iodiomorphs, two versions of the same gene that show low levels of homology, and encodes an estimated 20 genes, which are involved with mating and meiosis. The mating type determines which pheromones to produce and which pheromones in the environment to respond to, the necessary proteins encoded by this locus [8]. Additionally, in the organism Cryptococcus neoformans the locus encoding the α version of the gene has been linked to a high level of virulence than a cells due to the fact that α cells preferentially cross the blood-brain barrier. However, this is not always the case and in other species or some populations of C. neoformans, the α and the a cells are equally virulent [8].


The presence of this locus in the genome of a microbe represents the possibility that the microbe reproduces sexually. If the MAT locus can be amplified, the nucleotide sequence can provide preliminary clues to the reproductive nature of the organism. If the microbe reproduces asexually, if has no need to differentiate between two mating types, and MAT will be under the influence of relaxed selection. Mutations will collect over time until MAT is no longer functional. However, if an organism reproduces sexually, the mating type genes must continue working, and purifying selection will occur: mutation in MAT will confer a loss of fitness and the mutation will fail to be passed along to subsequent generations [9]. Based upon this analysis, decisions about whether to continue looking for a sexually reproductive state can be made. With evidence of purifying selection, further analysis will be needed to accumulate enough direct evidence for proof of sexual reproduction.

The discovery of genes that are homologs of genes known to encode proteins involved in meiosis can provide preliminary direction on whether or not to continue searching for evidence of sexual reproduction. For example, the Giardia genome contains seven homologs of meiosis-specific genes, but meiosis has never been witnessed in this organism. Instead, this organism has a more complicated life cycle. The presence of these genes is being used to attempt to determine how genetic variation is controlled in this organism (see below). The presence of these homologs suggests that although meiosis may not occur, similar control could be, or the last common ancestor of this genus utilized meiosis during its life cycle [8].

The search for evidence of sexual reproduction in Giardia populations is ongoing. The presence of genes involved in meiosis was discovered, and with this initial piece of evidence, the gene sequences were compared. The sequences showed considerable variation and showed clear evidence of recombination [5]. A later study examined allelic sequences more broadly, specifically looking for evidence of allelic sequence heterogeneity (ASH) [10]. The theory behind this search is that mutations will accumulate in genetic sequences differently in asexual and sexual reproduction. If an organism is reproducing asexually, mutations will occur at random throughout the chromosomes; additionally, it is much more rare for the same mutation to arise in the same gene. Thus mutations will accumulate in each chromosome and the mutations will not match each other. However, if crossing over is occurring in some form, the mutations will come to match each other due to the dual nuclei and tetraploidy existing in this species. By amplifying and sequencing the genome of an isolated line, a picture of alleles can be gained. If a “double peak” persists in the genome of the lineage from a single cell this means that a mutation has arisen in the genome resulting in a heterozygous allele. This heterozygosity has been maintained through homologous recombination at some point in the sexual reproduction of this organism.

Older methods of discovering evidence for sexual recombination are general population genetics studies. Burt et al. utilized DNA sequence-level polymorphisms, or different sequences encoding the same gene, as a test for evidence of sexual reproduction in Coccidiodes immitis [11]. This study revealed molecular evidence for recombination in this fungus due to the fact asexual and sexual reproduction result in different linkage patterns. The pattern obtained in this study was one characteristic of a haploid populations reproducing sexually. Prior to this study no evidence for a sexual interaction had been found [11].

The widespread nature of sexual reproduction across eukaryotic lineages lends evidence to the conclusion that an ancient common ancestor of eukaryotic microbes had a lifestyle that required a sexual stage. Across eukaryotes, sexual mechanisms are similar for both transmission of genetic material as well as maintenance of genetic integrity, often epigenetic in nature. Although these similar processes exist, it is still unknown how sexual reproduction began and this remains a large question in the evolution of eukaryotes [2].


Sexual reproduction when compared to asexual reproduction comes with increased energetic and evolutionary costs. In larger eukaryotes, these costs center on the production and spread of male gametes as well as the cost of sexual behaviors in order to attract viable partners. However, these specific costs do not exist in eukaryotic microbes, which seemingly need to do neither of these things. The costs of reproducing sexually must be offset and result in increased fitness since so many microbial populations utilize this reproductive strategy [4].

Sexual Reproduction in eukaryotic microbes can be difficult to characterize and represent in an accurate manner. Some methods of sexual reproduction are relatively simply following a strategy based upon meiosis to reduce the ploidy and karyogamy to reestablish the original ploidy, while other strategies involved center around alternation of generations similar to that found in plants. Alternation of generations begins in either a haploid or diploid state where asexual clonally occurs until environmental conditions change and prompt a shift to the other ploidy. Haploid cells fuse to form zygotes and create diploid cells while diploid cells undergo meiosis, undergoing homologous recombination in the process, to form haploid cells [5].


Following are some more bizarre examples of well-characterized reproductive strategies. In many cases recent discoveries are constantly increasing and changing the understanding of sexual reproduction across the eukaryotic world. Study of eukaryotic microbes usually focuses upon parasites. These organisms currently present the largest threat and an increased understanding of these pathogens will hopefully result in better vaccines and therapies [15].

C. albicans is the most prevalent human fungal pathogen currently known. Until recently it was known that C. albicans reproduced in a parasexual cycle involving the fusion of two diploid cells to produce a tetraploid cell. This tetraploid cell then undergoes a reduction of the number of chromosomes to restore the diploid state. This reduction is not through meiosis, but rather a chromosomal loss mechanism, resulting in a high degree of aneuploidy as well as restoration of the diploid state [3]. It was recently discovered that C. albicans also forms mating-competent haploid cells. These haploid cells arise through the same chromosomal loss at a rate of 1-3 per 100,000 cells. Haploid cells will then switch from the white to the opaque state, necessary for mating to occur, and mate with cells of the opposite mating type, determined by the MAT locus, to form diploids. There is also evidence that the diploid state can result from a failure of cytokinesis after mitosis. C. albicans represent a unique organism that has the ability to form and utilize a variety of ploidy states to best adapt to the environment and increase genetic diversity. For example, potentially lethal mutations as a result of inbreeding can be complemented with a functional allele in this reproductive mechanism [16]. 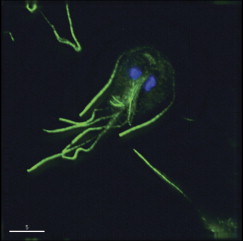 Giardia species are intestinal pathogens of mammals and is a significant cause of diarrheal disease around the world. Not only is this pathogen widespread, but it additionally spreads antibiotic resistance through its many species [17]. The genus Giardia encompasses protists, which have two diploid nuclei and eight flagellae [1].


In 2007 it was discovered that Giardia lamblia isolates from three distinct lineages had extremely low genetic diversity in both coding and noncoding regions, proposing that the distinct patterns of genetic variation found resulted from the presence of genetic exchange in some form [17]. In addition, another study found the presence of five homologs of genes necessary for meiosis [5]. Thus, it can be inferred that some kind of exchange of genetic material is occurring, but whether this is representative of sexual reproduction cannot be determined without more direct evidence.


Later studies determined that Giardia species have a very distinct life cycle consisting of two stages. The first state, trophozoites inhabit the intestine of the host. Here, imbedded in the intestinal lining the trophozoites reproduce clonally. From here, the organisms can take one of two pathways—continue to reproduce clonally or form a cyst to be excreted into the environment. Another host animal will then consume such a cyst and once inside the intestinal lining of a new host, transform back into a trophozite, beginning binary fission and starting the cycle again [1].


A recent study by Carpenter et al. in 2012 found direct evidence of genetic exchange without meiosis in Giardia intestinalis. In cyst formation, four neuclei are created from the two that are present in the trophozite. Though immunofluorescence staining, it was discovered that cysts are formed though an incomplete mitotic division. Instead of cytokinesis, the cell internalizes its flagella as the cyst wall finishes formation [8]. Within the nuclei of the cyst it is believed that genetic exchange occurs during diplomixis [10]. Diplomixis is the fusing of two nuclei, leading to an exchange of genetic material between the two nuclei [10]. This genetic recombination is believed to result in the low levels of genetic diversity witnessed in a variety of populations [8]. An additional finding was the discovery that during excystation and reformation of trophozies each daughter cell has a copy of each parental nucleus [8]. Although much is known and understood about the way that Giardia reproduces, still much is unknown. The 2012 study ended with a list of the many things still to be discovered so that the spread of drug resistance is can be halted or countered [8]. 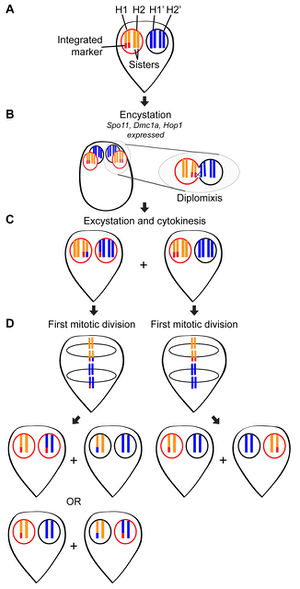