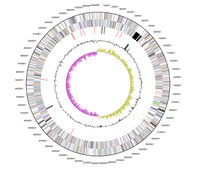 Shewanella woodyi is a gram negative, luminescent, nonsporulating rod (0.4-1.0 by 1.4-2.0 pm) with an unsheathed flagellum as was mentioned above. For this bacteria's metabolism, it is catalase and oxidase positive and most strains produce amylase. All strains do produce gelatinase but are unable to make lipase, chtinase, and agarase. They are able to metabolize D-galactose, cellobiose, D-glucuronic acid, acetate, a-ketoglutarate,propionate, succinate, L-alanine, L-threonine, L-leucine, L-serine, and putrescine. Oxygen and nitrite is used by these cells as electron acceptors for their metabolic processes. This bacteria is also involved in carbon and nitrogen fixation in its marine environment and the biodegradation of pollutants.[1] 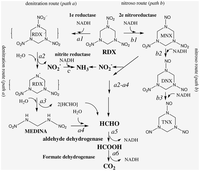