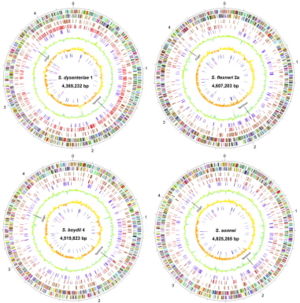 2. At the National Shigella Reference Centre in Israel during the years 2000- 2005 5,616 Shigella isolates were tested for resistance to certain antibacterial products. In one strain of Shigella boydii 2 and in two strains each of Shigella flexneri 2a, S. flexneri 6, and Shigella sonnei there was discovered resistance to ceftriaxone. All of these strains were found to be producers of extended-spectrum beta-lactamase (ESBL) and also very sensitive to tazobactam which inhibits the bacterial beta-lactamases. More research is needed to determine the rate of resistance to antibiotics and rate of transfer of resistant genes.[9]