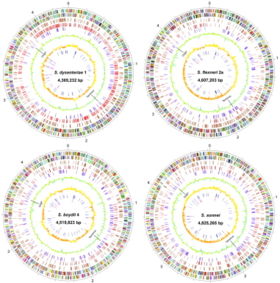 Cell Structure: Shigella structural characteristics follow that of Gram-negative bacteria. Most research would agree that Shigella are nonmotile but some evidence suggests that they do in fact have flagella, although motility is not necessary for infection of colon. The flegella tends to be on one pole of the cell and about 10 microns in length and 12- 14nm in diameter. The genes coding for the flagella in S. dysenteriae, S. flexneri, S. boydii and S. sonnei were different; attributing to the genetic diversity among the species.[8]