Difference between revisions of "Silver as an Antimicrobial Agent" 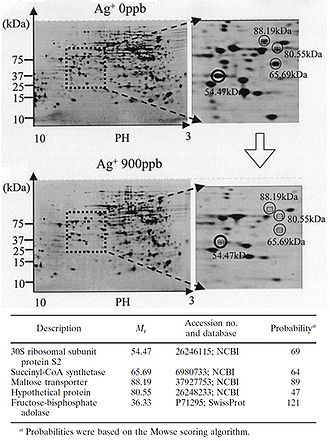 Figure 2. Protein expression is downregulated when bacteria are exposed to Ag+. 2-D polyacrylamide gel electrophoresis protein patterns obtained from the suspensions of E. coli after reactions with 0-ppb and 900-ppb Ag+ solutions for 3 h. Some spots indicate decreased amounts of protein expression after reaction with a 900-ppb solution, compared to results after reaction with a 0-ppb solution. Four spots with a decrease to less than one-third of the original amount are marked with open circles. The circled spots were cut out from the gel and analyzed with MALDI-TOF mass spectrometry. The probable identity of the proteins represented by the circled spots were determined by the NCBI and Swiss-Prot databases. Fructose-bisphosphate adolase was identified as another possible downregulated protein through this same process (not shown on this gel). The identity of the protein marked "Hypothetical protein" could not be determined through protein databases (Yamanaka et al. 2005). 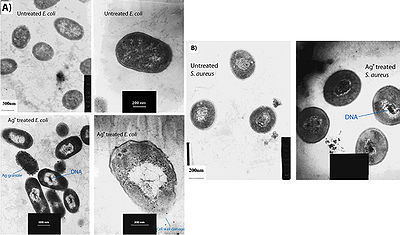 Figure 3. Treatment of cells with Ag+ results in DNA condensation, cell wall damage, and silver granule formation. (A) E. coli and (B) S. aureus cells with and without Ag+ treatment were observed with transmission electron microscopy (Feng et al. 2000). 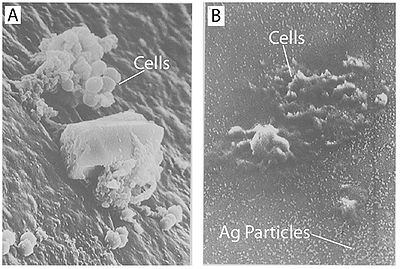 Figure 4. Treatment with silver leads to dehydration of microbial cells. A) Staphylococcus aureus without silver treatment as found on a catheter. B) Staphylococcus aureus on a silver-containing material with microdispersed silver particles throughout the matrix. Both images were captured using scanning electron microscopy. Notice the shrunken appearance of the cells (Guggenbichler et al. 1999). 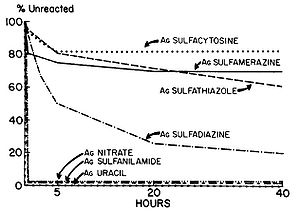 Figure 6. Percent completion of reactions of various silver compounds with human serum. Human serum was incubated with 10 µmol of each silver salt. At the intervals designated, portions were removed and centrifuged, and the clear supernatants were analyzed to determine the amount of unreacted silver compound. The amount of compound used was taken on 100% (Fox and Modak 1974).

Although the antimicrobial properties of silver have been known for centuries, we have only recently begun to understand the mechanisms by which silver inhibits bacterial growth. It is thought that silver atoms bind to thiol groups (-SH) in enzymes and subsequently cause the deactivation of enzymes. Silver forms stable S-Ag bonds with thiol-containing compounds in the cell wall that are involved in transmembrane energy generation and ion transport (Klueh et al. 2000). It is also believed that silver can take part in catalytic oxidation reactions that result in the formation of disulfide bonds (R-S-S-R). Silver does this by catalyzing the reaction between oxygen molecules in the cell and hydrogen atoms of thiol groups: water is released as a product and two thiol groups become covalently bonded to one another through a disulfide bond (Davies and Etris 1997). The silver-catalyzed formation of disulfide bonds could possibly change the shape of cellular enzymes and subsequently affect their function.

The silver-catalyzed formation of disulfide bonds can lead to changes in protein structure and the inactivation of key enzymes, such as those needed for cellular respiration (Davies and Etris 1997). 30S ribosomal subunit protein, succinyl coenzyme A synthetase, maltose transporter (MalK), and fructose bisphosphate adolase were identified with high probability as proteins with decreased expression once cells are treated with a 900-ppb Ag+ solution (Yamanaka et al. 2005; Figure 2). It is hypothesized that silver ions bind to the 30S ribosomal subunit, deactivating the ribosome complex and preventing translation of proteins (Yamanaka et al. 2005). The proteins that were found to be downregulated upon treatment with Ag+ serve important functions to the cell: succinyl-coenzyme A synthetase, an enzyme involved in the TCA cycle, catalyzes the conversion of succinyl-CoA to succinate while phosphorylating ADP to produce ATP (Slonczewski and Foster 2009); fructose bisphosphate adolase is an enzyme involved in glycolysis that catalyzes the breakdown of fructose-1,6-bisphosphate into glyceraldehydes 3-phosphate and dihydroxyacetone phosphate (Slonczewski and Foster 2009); MalK is a cytoplasmic membrane-associated protein involved in the transport of maltose (Bavoil et al. 1980). In one way or another, all of these proteins play a role in energy and ATP production for the cell, so the decreased expression of any one of these proteins could lead to cell death (Yamanaka et al. 2005).

Another one of the suggested mechanisms of the antimicrobial activity of silver was proposed by Klueh et al. (2000). It was proposed that Ag+ enters the cell and intercalates between the purine and pyrimidine base pairs disrupting the hydrogen bonding between the two anti-parallel strands and denaturing the DNA molecule (Klueh et al. 2000). Although this has yet to be proved, it has been shown that silver ions do associate with DNA once they enter the cell (Fox and Modak 1974).

Most of the proposed mechanisms involve silver entering the cell in order to cause damage. How would a metal like silver, or its ionized form Ag+, get across the hydrophobic cellular membrane to access the cytoplasm? From the perspective of a transmembrane protein, the silver ion simply appears to be a particle of certain size with a +1 charge. It is possible that silver ions get access to the interior of cells through transmembrane proteins that normally function to transport ions other than silver ions. Transmembrane proteins such as CopB-ATPase from Enterococcus hirae have been shown to be able to transport silver ions although its putative function is a copper transporter (Solioz and Odermatt 1995). This proves that there are ways for silver to be transported across the cell membrane even though specific silver transporters may not exist.

In order for silver to have any antimicrobial properties, it must be in its ionized form (Lok et al, 2007; Rai et al. 2009). Silver in its non-ionized form is inert (Guggenbichler et al. 1999), but contact with moisture leads to the release of silver ions (Radheshkumar and Munstedt 2005). Thus, all forms of silver or silver containing compounds with observed antimicrobial properties are in one way or another sources of silver ions (Ag+); these silver ions may be incorporated into the substance and released slowly with time as with silver sulfadiazine, or the silver ions can come from ionizing the surface of a solid piece of silver as with silver nanoparticles.

Feng et al. (2000) conducted a study to observe the effects of silver ions on gram-positive and gram-negative bacteria, namely Staphylococcus aureus and Escherichia coli. They treated cells with AgNO3, which is source of Ag+ in aqueous environments, and looked at the structural and morphological effects of these silver ions on the cells. The cells were exposed to AgNO3 for 4-12 hours before being prepared for microscopy. The cell were then fixed and sliced with an ultramicrotome to produce ultrathin sections for transmission electron microscopy (TEM). They observed that cells exposed to the Ag+ ions seemed to have activated a stress response that led to the condensation of DNA in the center of the cell. They also observed cell membrane detachment from the cell wall, cell wall damage, and electron dense granules outside and, in some instances, inside the cell (Figure 3). It was proposed that condensation of DNA occurred as a protective measure in order to protect the genetic information of the cell (Feng et al. 2000), however condensation of DNA could also prevent cell replication by preventing the DNA from being accessed by transcriptional enzymes such as DNA polymerase. The electron dense granules that formed inside and outside the cell were extracted and subjected to X-ray microanalysis to determine their composition. It was discovered that the granules were in part composed of silver and sulfur. This finding supports the idea that silver inactivates proteins by binding to sulfur-containing compounds (Klueh et al. 2000). It was also observed that when treated with Ag+, E. coli, a gram-negative bacterium, sustained more structural damages than the gram-positive S. aureus (Feng et al. 2000).


It has also been shown that treating cells with silver leads to cell shrinkage and dehydration (Figure 4) (Guggenbichler et al. 1999). The TEM images from Feng et al. (2000) (Figure 4) show that cells that sustained extensive damage eventually ended up with cell wall and cell membrane damage. Damage to the cell membrane could lead to the leaking of cytoplasm from the cell, which would result in dehydrated and shrunken cells as shown by the SEM images from Guggenbichler et al. (1999).

Attack on Gram-positive vs. Gram-negative


It has also been shown that when silver treatment is combined with other antimicrobial methods such as UV light, copper ions, or oxidizers, a synergistic effect is observed, that is bacterial growth is inhibited more by treatment with silver and an additional antimicrobial method than would be expected if the inhibition effects of silver and that additional antimicrobial method were summed (Silvestry-Rodriguez et al. 2007). Because silver can inflict a fair amount of damage to the cell only once it gains access to the cytoplasm, it is believed that if some other antimicrobial method can give silver ions access to the cytoplasm sooner than if silver ions were working alone, a synergistic effect of the two methods would be observed (Silvestry-Rodriguez et al. 2007).

Silver can be administered to cells in a various number of ways. Silver salts such as silver nitrate (AgNO3) are effective at providing a large quantity of silver ions all at once. Because silver binds to thiol groups, it has been proposed that although one of the antimicrobial mechanisms of Ag+ is binding to sulfur-containing compounds, thiol-containing compounds such as proteins with cysteine residues can also serve to absorb the silver ions and neutralize their antibacterial activity by preventing the silver ions from attacking DNA (Liau et al. 1997). For this reason, prolonged antimicrobial activity from silver is best achieved by continuously releasing a moderate amount of silver ions. 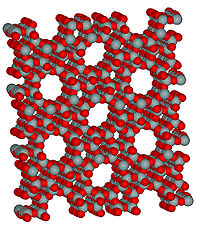 Figure 7. Structure of zeolite. Notice the porous structure that is well suited to accommodate ions such as Ag+. (http://en.wikipedia.org/wiki/File:Zeolite-ZSM-5-3D-vdW.png)

Silver zeolite is also a commonly used form of antibacterial silver. Zeolite (Figure 7) is a porous matrix of sodium aluminosilicate that can bind a large amount of silver ions in its micropores (Monteiro et al. 2009). Silver ions are released from the zeolite matrix by exchange with other cations in solution and the amount released is proportional to the concentration of other cations in the solution (Breck 1974 as cited in Kawahara et al. 2000). Kawahara et al. (2000) ran experiments to test the antimicrobial properties of silver zeolite in anaerobic conditions. Minimum inhibitory concentration (MIC) assays were performed using silver zeolite, and it was found that depending on the species tested, the minimum inhibitory concentrations of silver zeolite ranged from 256 to 2048 µg/ml, which corresponded to a range of 4.8 to 38.4 µg/ml of Ag+. Because zeolite is already used in some toothpastes as a polishing material and the lack of silver toxicity to humans at concentrations such as those found in the MIC assays, the authors believed that silver zeolite would be a good compound to incorporate into dental materials, even those used in anaerobic conditions such as periodontal pockets (Kawahara et al. 2000). 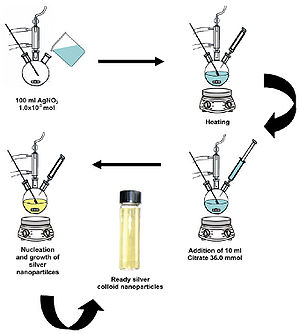 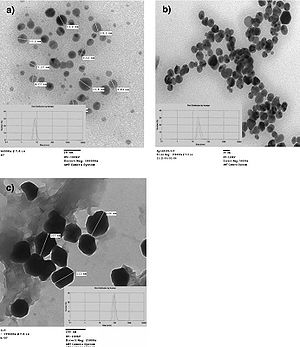 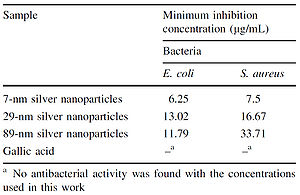