Biological soil crusts (BSC) are large complex communities of cyanobacteria, algae, bryophytes, [lichens], mosses, [bacteria], and fungi. These diverse collections of microbes occur all over the world in arid and semi-arid regions, which comprise more than 35% of all terrestrial land. The microbial community that inhabits the upper and bottom few millimeters of soil can comprise up to 70% of the living cover in arid regions. BSC can play an important role in desert environments as they increase the nutrient content of soils, stabilizing soil surfaces, as well as prevent soil erosion. BSC are also known as cryptogamic, microbiotic, cryptobiotic, and microphitic crust. It is important to distinguish BSC as a formation of living organism and by-products. Chemical and physical crust are non organic formations such as salt crust or platy crust.

BSC are a key component of stabilizing mobile surfaces by binding soil particles together with polysaccharide exudates, and a matrix of fibers. The binding of the surface particles help protect from wind and water erosion as well as cryoturbation. The function these microbe provide is important in arid and semiarid areas with low soil formation, fertility and moisture. With small amounts of vascular vegetation in desert biomes, conditions are ripe for colonization by microbes to create BSC. 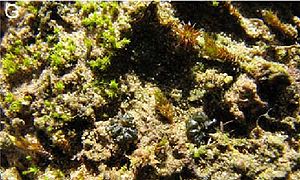 BSC are easily susceptible to compressional disturbances. Livestock grazing, recreational activities such as biking, hiking, off-roading, and scenic trails are all detrimental to BSC. Pressure exerted on the the crust break sheaths and filaments created by the microbial community reducing nitrogen availability and soil stability. When BSC are compacted and broken it leaves the surface of the soil more susceptible to erosion. Disturbances to lichen and moss communities are difficult to recover from. Lichens are slow to grow with recovery spanning from 5 to over 500 years making lichens a fragile species to BSC.

Formation of these soil crusts begin with interactions between colonizing fungi and cyanobacteria. The colonizing microbes will often create a surface of compacted soil particles with a thickness up to 10cm thick. Microcoleus is a type of cyanobacteria that will form filaments surrounded by extracellular sheats. The filaments are mobile through the moist soil. Filaments are of this cyanobacteria are in constant regeneration creating stable soil aggregates. Other common cyanobacteria found in BSC are [Nostoc], Scytonema, Calothrix, and Gloeocapsa. Once cyanobacteria and fungi have created a stable platform, other organisms such as lichens, algae, and mosses will begin a secondary succession. Lichens and mosses aid in soil stability by binding soil particles with rhizines further increasing resistance to wind and water erosion.

The changes these microbes make to the soil structure create a more suitable habitat and enhance the ability of vascular plant species to reproduce in arid environments. Studies have demonstrated an increase in plant productivity as well as an increase in nutritional content in plant tissue when plants are grown in BSCs. Organisms in the BSC increase moisture, organic matter, and nutrient content. This is important in arid regions as all those variables are the limiting factor in plant growth.

BSC are highly sensitive to water content. Larger concentrations of water increase the diffusion of CO2 and O2 disturbance by surface water. Decrease in amounts of water cause algae to be less productive causing an overall drop of photosynthesis in BSC. An increase in temperature has also shown decreases in photosynthesis production.

Cyanobacteria, eukaryotic algae, bryophytes and lichens are all labeled as primary producers that provide an additional pathway for carbon to enter the soil.

Lichens are an important component to the food web of soil crusts. Many types of arthropods use lichens as a food source. Microarthropods are essential to nutrient cycling as the contribution they have in BSC increases the microbial turnover. Microarthropods enhances leaching of soluble materials that promotes microbial colonization by increasing surface area. Some of the more commonly found microarthropods in warm deserts are Acari and Prostigmata.

Grazing in Northern Mexico has degraded semiarid landscapes. The landscapes are know to be occupied by BSC communities. Research was conducted experiment how responsive the BSC cover was to a drying and wetting cycle as well as an absence in grazing for two years. They also questioned the implications for soil erosion. Results found demonstrated lichen and cyanobacteria morphotypes enhanced soil erosion resistance. This result suggested soil stability can be dynamic much like the BSC. More studies need to be done to demonstrate BSC community dynamics, as well as their role in biotic and abiotic environments.

Military veterans of the Gulf War have reported increases in amyotrophic lateral sclerosis compared to non deployed personnel. Research has focused on the inhalation of cyanobacteria and cyanotoxins in the Qatar regions dust. Crust of cyanobacteria are very prominant in the deserts of Qatar. Disturbance by military activities caused an increase in dust. The dried crust were found to contain neurotoxic cyanobacteria toxins such as beta-N-methylamino-L-alanine. Results showed inhalation of BMAA and other cyanotoxins increase the risk for developing ALS as well as other neurodegenerative diseases.

Transplant Survivorship of Bryophyte Soil Crusts in the Mojave Desert.

In the Mojave Desert BSC moss was allocated to different regions to test the probability of survival based on end source and destination micro habitat. After a period of over two years the transplanted moss did survive. The effects of the new micro habitat showed a decrease in cover provided by the moss as well as shoot decrease. The experiment demonstrated restoration of BSC from moss crust must require movement of exposed and shaded regions of the crust, all while avoiding moss movement from a shaded area to an exposed site.

An Introduction to Biological Soil Crusts [[1]]