Food webs are used to know different energy interactions in a given ecosystem. The soil's food web is very dynamic and the living part of soil and it is very complex and interchanging depending on it's ecosystem. The interactions found in the food web are soil organisms living all or part of their lives in the soil while producing energy and working together with plants to survive. These interactions carried out in the soil by soil organisms and plants are a vital (NRCS)

thumb|300px|right|Diagram demonstrating the soil food web cycle. The organisms found in the soil food web carry out a large amount of microbial processes such as decomposition, mineralization, immobilization, respiration, and fixation along with many others. These processes help support above and below-ground plant growth and their processes make nourishment for plants possible.

The start of all biological interactions within any soil food web would start with organic matter. Organic matter is a key component when it comes to fueling any interaction in the food web such as decomposition and is made up of humus and active organic material. Without any organic matter, microbes will not be present to fuel the plant with essential nutrients. Soil organic matter is the storehouse for the energy and nutrients used by plants and other organisms. Bacteria, fungi, and other soil dwellers transform and release nutrients from organic matter. These microshredders, immature oribatid mites, skeletonize plant leaves. This starts the nutrient cycling of carbon, nitrogen, and other elements. (NRCS) Organic matter is recycled back into the food web when organisms of higher trophic levels die off and are decomposed by the nutrients that were used to create food for them in the very beginning.

There are many different ecosystems in the world and the soil food web is affected by climate, rainfall, management factors, acidity, etc. Soil food webs are found in both terrestrial and freshwater/marine sediment soils. The interactions carried out in the soil food web is highly important in both systems. 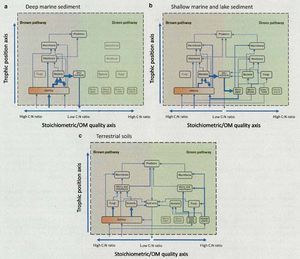 Current research of soil food webs interaction with environmental change is starting to be understood by agronomists, ecologists, and various other researchers. They are studying different responses of soil microorganisms to environmental changes because of their roles in various ecosystem processes and the sensitivity of various environments. We could use this information to link global carbon fluxes and the detrimental effects of global climate change that could be directly linked to soil organism interactions.

With this research scientists can study how land management practices can effect soil microbial community structure and its interactions. This can be used to determine if different cultivation practices or fertilizer treatments could effect the microbial community's biomass, structure, and potential function.