Difference between revisions of "Sparassis crispa"

Sparassis crispa is a species in the Fungi kingdom found all over the world in northern temperate forests (2). It is a brown rot fungi which grow at the base of conifer trees such as pine, spruce, cedar, and larch. The fruiting body of the fungus is known as cauliflower fungus because of the resemblance it has with the vegetable, with flat and curly lobes that come in cream, white, and yellow. Cauliflower fungus are an edible mushroom, known for their culinary and medicinal benefits and are prized throughout Europe and Asia for their mild flavor and multiple health benefits such as anti-tumor and anti-cancer (2). Sparassis crispa belong to the genus Sparassis which include at least 8 different clades which mostly differ in morphological features but also can differ in cellular features such as the presence or absence of clamp connections (3). 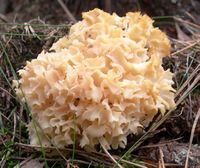 Sparassis crispa (S. crispa) are members of the phylum Basidiomycota. The species exhibits bifactorial heterothallism (1), requiring two compatible partners to produce sexual spores and mating alleles with two loci. The basidiocarp consists of branched flabellae with spore baring hymenium on both sides (7). S. crispa contains a monomitic hyphal system and is a clamp connection producing species (3). Basidiospores are hyaline, smooth, subglobase with thin walls (7). Basidia contain 2-4 sterigmata and basidiospore are generally larger with a low number of spores produced on a single basidium (7).

S. crispa are known for their production of health benefiting compounds such as β-glucan, anti-fungal compounds such as sparassol, methyl-2, 4-dihydroxy-6-methylbenzoate, and methyl-dihydroxymethoxy-methylbenzoate, ergosterol peroxides, and benzoate derivatives that can be used to treat human diseases such as diabetes, wound healing, as well as immune system, cytokine induction, and cancer (4). In addition, substances such as anti-fungal and phenolic compounds, can be used as anti-oxidant or anti-fungal agents (4). S. crispa along with other clads in the Sparassis genus are not only edible mushrooms, but can be used in health promoting medicinal applications (4).

S. crispa is a brown rot fungi which can grow as parasites or saprobes on the roots of coniferous trees. They can be found at the base of living or decaying hardwood trees. S. crispa can enter through scars of roots and stems of conifers (6) and live on a living or dead host.