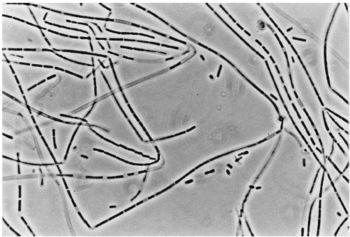 No Sphaerotilus genomes have been sequenced at this time. 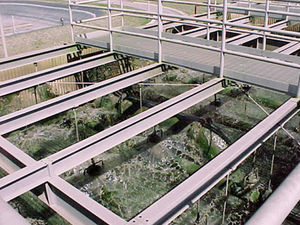 Sphaerotilus natans is a filamentous bacterium characterized by its rod-shaped cell that is enclosed by a tubular sheath. Sphaerotilus bacteria grow well under low oxygen concentrations and are able to utilize many different types of organic carbon compounds: they can metabolize polysaccharides, sugars, polyalcohols, or organic acids as carbon sources. The Sphaerotilus natans swarmer cells have a polar organelle at the flagellated pole located near the cytoplasmic membrane next to its flagella (Lybarger and Maddock, 2001). The nonmotile cells do not have this organelle.

Sphaerotilus natans can be mainly found in flowing water, sewage, and activated sludge. It has been known to cause such problems as pipe clogging and "bulking of activated sludge in wastewater treatment" due to its ability to settle on a solid surface by entanglement or by using an adhesive basal element on one end of the filament (Pellegrin et al. 1999). In addition, strains of filamentous bacteria were isolated from paper mill slimes that had morphological and physiological characteristics of Sphaerotilus. However, these isolates could grow at tempuratures up to 40oC, which is higher than Sphaerotilus natans's normal tempurature. 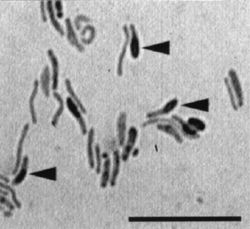 A picture of the rod-shaped cells of strain TB. Some of the cells are irregularly curved, and some have thick ellipsoidal spores (arrows). From Takeda et al.

Microorganisms have been collected from the soil and river water that are able to degrade and grow on the purified sheath of Sphaerotilus natans. Two bacterial strains, called TB and TK, are rod shaped, negatively stained by gram staining, faculatitvely anaerobic, and formed ellipsoidal endospores: these defining characteristics suggested that the bacteria belong to the genus Paenibacillus according to some researchers. The enzyme that was responsible for the sheath-degrading was at optimal activity at pH 6.5 to 7.0 and 30 to 40C. The ions Mg2+, Ca2+, Fe3+, and iodoacetamide accelerated the sheath-degrading reaction and Cu2+, Mn2+ and dithiothreitol inhibited the reaction. The enzyme itself "acted on the polysaccharide moiety of the sheath, producing an oligosaccharide the size of which was between the sizes of maltopentaose and maltohexaose" (Takeda et al. 2000).