A Microbial Biorealm page on the genus Staphylococcus 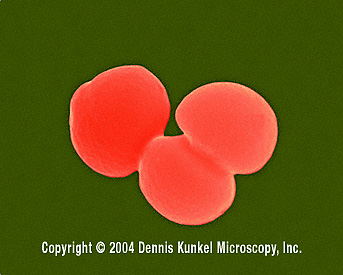 Staphylococcus aureus. From the University of South Carolina.

Staphylococci are spherical Gram-positive bacteria, which are immobile and form grape-like clusters. They form bunches because they divide in two planes as opposed to their close relatives streptococci which, although they are similarly shaped, form chains because they divide only in one plane. Staphylococci are facultative anaerobes. They mainly grow by aerobic respiration, or fermentation that produces lactic acid.

There are two different types of colonies formed. Those formed by S. aureus are yellow and become rather large on a rich medium, while those of S. epidermidi are white and form relatively small colonies, even on a rich medium.

As a pathogen, it is important to understand the virulence mechanisms of Staphylococcus in order to successfully combat the pathogen. Strains of Staphylococcus resistant to our most powerful antibiotics have increased pressure on researchers to find alternative, more effective ways of fighting Staphylococcus.

Virulence factors are encoded by phages, plasmids, pathogenicy islands and staphylococcus cassette chromosome. Increased resistance for antibiotics is encoded by a transposon (Tn 1546) that was inserted into a conjugated plasmid that also encoded resistance to other things including disinfectants. MRSA (Methicillin-Resistant Staphylococcus Aureus), which is resistant to the antibiotic methicillin, expresses a modified penicillin-binding protein encoded by mecA gene. This was brought about by many evolutions thought horizontal gene transfer of mecA to a wide variety of methicillin susceptible S. Aureus strains.

Diversification within the S. Aureus population is achieved through a combination of mutation, recombination and horizontal gene transfer. Evolution of this bacteria can occur through asymptomatic colonization and/or during the course of the caused disease.

Staphylococcus Aureus is a gram positive bacteria, which means that the cell wall of this bacteria consists of a very thick peptidoglycan layer. They are spherical, form clusters in 2 planes and have no flagella.

Secretions are numerous, but include surface associated adhesins, endotoxins, exoenzymes, capsular polysaccharide. the capsule is responsible for enhanced virulence of a mucoid strain.

Staphylococcus Aureus is a normal inhabitant of the skin and mucous membranes in the nose of a healthy human, while S. epidermidis inhabits only the skin of healthy humans.

S. Aureus is infectious to both animals and humans. Approximately 30% of the normal healthy population is affected by S. Aureus as it asymptomatically colonizes on human hosts.

Staphylococcus usually only infects immunocompromised humans, and is an extremely versatile pathogen. Infections usually remain localized at the point of entry by host defenses. S. aureus is one of the major causes of hospital-acquired infection. Foreign bodies, such as sutures, indwelling catheters, and implanted joints, are extremely susceptible to Staphylococcus epidermidis colonization, and often serve as the point of entry for infection. Another common path of infection is the respiratory tract, where the bacterium causes pneumonia. By forming biofilms Staphylococcus epidermidis is resistant to antibiotics, antibodies, and phagocytosis, and can serve as a reservoir for antibiotic resistant genes that can be transferred to other bacteria. Other diseases caused by staphylococci include boils, sinusitis, emesis, diarrhea, endocarditis, scalded skin syndrome, osteomyelitis, urinary tract infection, and toxic shock syndrome.

In the late 1970's an epidemic of toxic shock syndrome (TSS T-1) was brought about by a change in host environment. The environment change was encouraged by a creation of modern technology otherwise known as the super-absorbent tampon. This new modern convenience product that had swept the nation's females actually created a new nutrient-rich surface area for many bacteria to thrive off of, "S. Aureus" being a major resident. However, TSS from tampons can be easily avoided by correctly using tampons (read instructions and warning labels listed with tampon products).

The first serious emergence of antibiotic resistance staph occurred with a specific strain we refer to as Methicillin-Resistant Staphylococcus Aureus, abbreviated as MRSA. This strain expressed a modified penicillin-binding protein encoded by mecA gene and is present in 4 forms of staph. cassette. The MRSA, resistant to the antibiotic methicillin, and eventually was isolated. Consequently, vancomycin (the most powerful antibiotic in our arsenal) became the primary antibiotic used to combat staphylococcus infection. In 1997 a strain of S. aureus resistant to vancomycin was isolated, and people are once again exposed to the threat of untreatable staphylococcus infection. MRSA strains are currently a very significant healthcare problem. The sequencing of the S. aureus genome will hopefully provide insight into how the organism generates such a variety of toxins, and aid researchers in developing ways of combating the versatile bacterium.