Difference between revisions of "Staphylococcus roseus"

A Microbial Biorealm page on the genus Staphylococcus roseus

Staphylococcus roseus is a light red to red colored bacterium. [[1]] 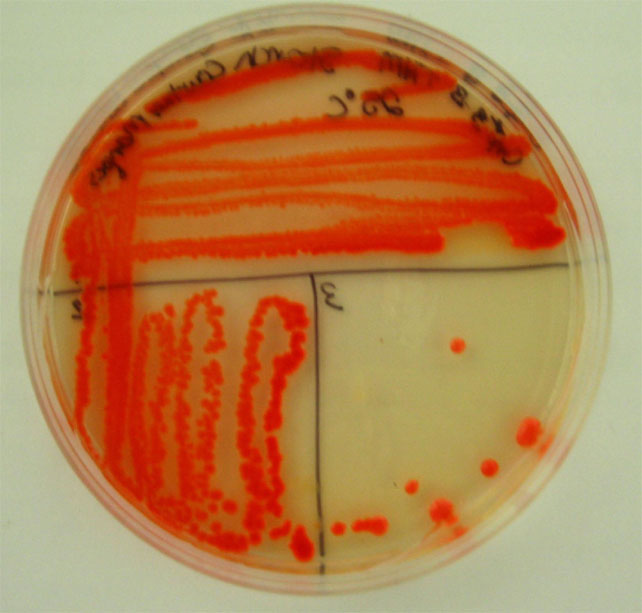 Staphylococcus roseus is a non-motile gram positive cocci that is coagulase negative. The cocci are usually clustered in groups of 4. It gets its name “roseus” from the cultures pigment. Cultures exhibit circular colonies that are convex in shape, and smooth and dry texture. S. roseus is an obligate aerobe. S. roseus creates a alkaline in glucose, but cannot utilize sucrose or lactose. Likewise, S. roseus is able to hydrolyze casein, triglycerides, and starch but not phospholipids. S. roseus also cannot utilize citrate as a carbon source. Also, S. roseus can be induced to create lysine decarboxylase. S. roseus does not have cytochrome C as its terminal electron acceptor in its electron transport chain which reveals that it is a staphylococcus, not a micrococcus. S. roseus can break hydrogen peroxide into oxygen and water with catalase. The optimum temperature for growth is around 25°C.

Currently, research is being done to better distinguish the differences between the genera Micrococcus, Staphylococcus, and Sarcina. Because the G+C ratio found in S. roseus is about 72-72.8%, which leads scientists to believe that these species are more closely related to the genus Micrococcus, instead of Staphylococcus. As of now the deciding factor of what characteristics belong to what group is determined by the utilization of oxidase, which is the test for the presence of cytochrome c. Micrococcus is oxidase positive, while Staphylococcus is oxidase negative.

Staphylococcus roseus is sensitive to metronidazole. Metronidazole is a medical drug used to treat infections caused by microorganisms."