A Microbial Biorealm page on the genus Staphylococcus saprophyticus 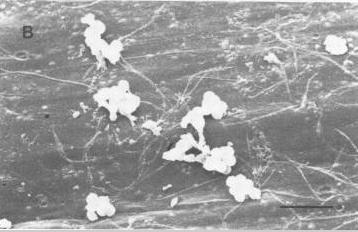 Staphylococcus saprophyticus from urine sample. From [10]

In 1962, Torres Pereira first isolated a coagulase-negative Staphylococci with antigen 51 from women with acute UTI. [4]. This antigen was later classified as S. saprophyticus. [3] Laboratory tests to identify S. saprophyticus are based on its resistance to the antibiotic Novobiocin and the absence of coagulase. [3]

As of 2005, the genome of S. saprophyticus (strain ATCC 15305) has been fully sequenced by Japanese researchers. [1] S. saprophyticus contains a circular chromosome of 2,516,575 bp, 2,446 ORF’s, and two plasmids 38.4 and 22.9 kb in size. The genome was sequenced to better understand the pathenogenesis of the organism. Whole-genome shotgun sequencing was used, sequencing in 1-2 kb or 10 kb inserts. The inserts were then assembled using PHRED/PHRAP/CONSED programs. The gaps were filled by PCR direct sequencing, using specific primers at the ends of each gap. [1]

The genome of S. saprophyticus contains many mobile elements including Staphylococcal cassette chromosomes (SCCs), an insertion sequence and a genomic island. The SCCs are thought to have integrated into the genome through a two-step process and contain a restriction enzyme modification system and a cassette chromosome recombinase (Ccr). [1] The SCCs are responsible for contributing to pathenogenicity and antibiotic resistance in Staphylococci. The genomic island in S. saprophyticus is associated with resistance to the antibiotics streptomycin and fosfomycin unlike the genomic islands in other Staphylococci genomes, which are associated with pathenogenicity, such as in Staphylococci aureus. [2] These mobile elements allow for lateral gene transfer between other bacterial species.

The two plasmids carry the gene for an aquaporin which regulates the osmolarity of the cell. Multiple copies of the plasmids provide for expression of more water channels. [1]

Staphylococcus saprophyticus is a coagulase-negative species of Staphylococcus. Like other Staphylococci, it is Gram-positive, is globular shaped, and is a facultative anaerobe. It has abundant transporter systems to adapt to ever changing pH, osmolarity, and concentration of urea in human urine. [1] One of the adaptations is the gene expressed in the two plasmids. The plasmids contain a gene coding for aquaporin Z. The amount of water channels created is regulated by the number of copies of the plasmids. [1] To regulate pH, S. saprophyticus contains two Na+/H+ antiporters which keep the cell at homeostasis by the uptake of protons. [1] Bacteria need iron for survival. S. saprophyticus lacks siderophores, but uses other means to acquire iron. It has both a pH-driven symporter and a sodium-dependent symporter to transport divalent cations, including iron, into the cell. [1] These transport systems allow for S. saprophyticus to grow rapidly in the urinary tract.

S. saprophyticus contains urease, which hydrolyzes urea and produces a derivative of ammonia. This is how the cell metabolizes Nitrogen. Urease activity is known to be an infection causing factor in UTIs. [1]

Staphylococcus saprophyticus adheres to uroepithelial cells and sheep erythrocytes causing hemoglutination. [1] S. saprophyticus is an opportunistic infection [9] and is rarely present in normal humans with a healthy immune system. Spermicides and candidal infections affect the vaginal flora, increasing the risk of infection. [3] Staphylococcus cannot survive outside of a host animal.

Staphylcoccus saprophyticus is not naturally found in healthy humans. It infects humans through sexual intercourse or through contact with animals.[3] S. saprophyticus colonizes in the urinary tract of young women and men of all ages. The infection can spread to rectal and vaginal areas. [3] Alterations to the genital area effected by spermicides and candidal infection increases the susceptibility of S. saprophyticus infection. [3] Urease activity is known to be an infection causing factor in UTIs. Kidney and uretal stones are associated with S. saprophyticus infection. [3] The more severe diseases caused by infection are pyelonephritis, septicemia, nephrolithiasis, and endocarditis. [3] It was found that risk of infection increases in summer and spring months, with contact to domesticated animals (cows, sheep, pigs), and through swimming outdoors.

“The virulence factors of S. saprophyticus include adherence to urothelial cells by means of a surface-associated protein, lipoteichoic acid; a hemagglutinin that binds to fibronectin, a hemolysin; and production of extracellular slime.”[3]

Recent research has shown that S. saprophyticus is an opportunistic infection. [10]

There seem to be no positive uses for Staphylococcus saprophyticus as it is a pathogen.

Some of the recent research on Staphylcoccus saprophyticus:

Flouroquinolones are the drug of choice for treating UTIs, but their effectiveness is affected by urine pH and contents. Research was done on 2 drugs from German pharmaceutical companies. An extended-release drug, Ciprofloxacin and another drug Levofloxacin were tested. Levoflaxacin was shown to be more effective than Ciprofoxacin against S. saprophyticus. This was a lab study and not a clinical study. Only 12 volunteers were used.

The ability to resist the attacks of lysozymes allows microbes to infect and colonize more effectively. In this study, it was found that O acetylation of peptidoglycans confers resistance to lysozymes. S. saprophyticus was found to have O acetylation of its cell walls but not as much as other more pathenogenic organisms. S. saprophyticus is now shown to be an opportunistic infection.

Japanese researchers used whole-genome shotgun sequencing to sequence the entire genome of Staphylococcus saprophyticus. They sequenced in 1-2 or 10 kb inserts. The inserts were then assembled using PHRED/PHRAP/CONSED programs. The gaps were filled by PCR direct sequencing, using specific primers at the ends of each gap. The functions of predicted ORFs were assigned based on a BLAST program search against non-redundant protein database. Different adherence and hemoglutination assays were performed. By sequencing the entire genome, researchers have elucidated the adaptations for survival and pathenogenesis of S. saprophyticus.