Difference between revisions of "Stentor"

A Microbial Biorealm page on the genus Stentor 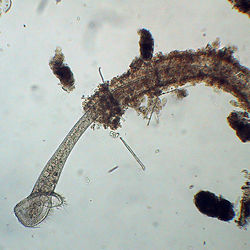 Stentor are classified within the phylum Ciliophora. They are referred to as heterotrichs because they have different cilial structures on different parts of their bodies. Stentor are among the largest aquatic protozoans.Up to 2 mm long, they are larger than some of the smallest multicellular organisms. Stentor usually attach to substrates and form a trumpet shape. If they are free-swimming, they assume an oval or pear shape. A major characteristic of Stentor is the rapid contraction and extension of the cell body.

There is not yet an extensive body of research on the genome structure of Stentor. 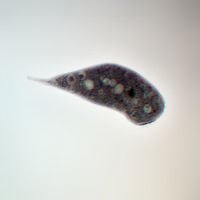 Cilia mainly cover the rim of the trumpet. In this way, Stentor resemble Vorticella. However, Stentor also have horizontal rows of cilia on the rest of the body to allow it to swim. Contraction and extension are controlled by two longitudinal fiber systems that are found in the cell cortex. They are called km fibers and myonemes. The primary photosensor is called stentorin. The macronucleus is an important feature of Stentor. It resembles a string of beads, consisting of nodules held together by cytoplasmic bridges.

Stentor are omnivorous heterotrophs. Typically, they feed on bacteria or other protozoans. Because of their large size, they are also capable of eating some of the smallest multicelluar organisms, such as rotifers.

Stentor usually inhabit freshwater environments. They ingest and form photosynthetic relationships with algae, causing them to have a blue or green color.

Stentor coeruleus exhibits a behavior called photodispersal. These organisms swim away from light and prefer to inhabit dim areas. To escape light, Stentor coeruleus reverses the direction of its ciliary beat to change direction and reorient itself.

Research done on Stentor illustrates that these organsisms can escape from tubes with increasing frequency after multiple trials. It was suggested that this behavior might be associative learning. However, Hinkle and Wood (1994) illustrated that this was not the case. Because they changed tubes and media from trial to trial, this diproved the original hypothesis. Stentor escapes are learned behavior, but nonassociative.