Difference between revisions of "Stinky tofu" 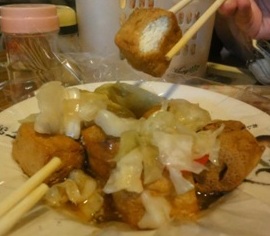 Stinky Tofu (chou doufu) is a traditional Chinese snack, usually sold in night markets or on street vendors. It is a type of fermented tofu with a strong “stinky” odour; hence its name stinky tofu. The “stinky” odour comes from the ammonia produced in fermentation of stinky brine, in which the tofu is then fermented in. used to make the tofu. Stinky tofu can prepared by steaming, in stews, deep-fried or eaten cold and can be produced from soft or hard tofu.[12]

Stinky tofu is produced using natural, open fermentation. Open fermentation means the fermentation does not occur in closed containers. Fermentation of stinky tofu depends on the types of raw ingredients used, which varies from region to region in China. For instance, Stinky tofu can be produced using all vegetables, such as bamboo shoot, Spiny amaranth and winter melon. Another formula may use a mixture of vegetables, and animal meat, including fish and shrimp. A third method can involve the addition of chemical reagents such as ammonia to produce the “stinky” fragrance. In this method, the ammonia is not naturally produced from alkaline fermentation.[4]

Stinky brine, the fermentation liquid responsible for the “stinky” odour is produced by mixing the raw ingredients with a salt solution in water in big-mouth jars [1] and openly fermenting for 2 to 6 months. Then, tofu is incubated and fermented in the stinky brine for 4-6 hours. Following, the tofu will be drip-dried overnight and cooked before consumption.[9]

Natural, open fermentation causes many production challenges. Firstly, there are no production standards or standardized starter cultures for producing stinky tofu. The microorganisms used to ferment the stinky brine usually originate from the original raw ingredients. These organisms come from the natural environment and are inoculated by chance. [9] Thus, each batch of stinky tofu varies, causing an inconsistency in the quality and taste of each batch. Finally, the open fermentation process for stinky brine can take up to 6 months, allowing insect infestation and fungal growth.[8]

Other than sanitary concerns arising from the usage of open fermentation, there is currently no health risk associated with stinky tofu consumption. During stinky tofu fermentation, one study showed there were no mutagenic activities present, hence during the production of stinky tofu, no carcinogens were created.[1] In addition, another study showed the levels and types of biogenic amines released during fermentation pose no toxicological concerns.[12]

Stinky tofu is considered to be alkaline fermentation, even though lactic acid is produced, because the end product contains ammonia. In the beginning of fermentation, the pH of the stinky brine will decrease to around 4.7 because more lactic acid is being produced, corresponding to an increase in the number of lactic acid bacteria. During this period, lactic acid bacteria are the dominant bacteria in the solution.[9] However, as the fermentation proceeds, microorganisms such as Bacillus sp. will dominate and secrete extracellular microbial proteases. These proteases will hydrolyze proteins to form amino acids and peptides during the fermentation process. This causes the release of ammonia, increasing the pH of the final products to around 8-9. The “stinky” odour of stinky tofu comes from the ammonia released.[14]

Some common, key organisms involved in the fermentation of stinky tofu are Bacillus sp., Enterococcus sp. Lactobacillus sp. and Streptococcus sp. Bacteria in the Bacillus genus are rod-shaped and facultative anaerobes or obligate aerobes. These bacteria produce extracellular proteases during alkaline fermentation.[1] 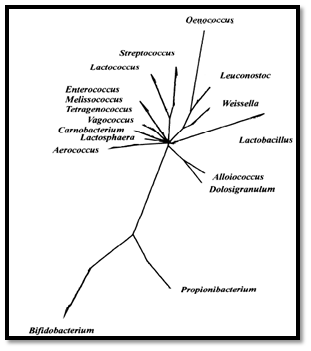 Enterococcus sp., Lactobacillus sp. and Streptococcus sp. are part of the genus lactic acid bacteria (LAB). Enterococcus sp. are cocci, found in pairs or short chains. They can be found in wide range of environmental conditions and are facultative anaerobes or anaerobes. [5][7] Streptoccocus sp. are spherical, ovoid and many are facultatively anaerobic.[5][7] Lactobacillus sp.are rod-shaped, motile with peritrichous flagella and are facultatively heterofermentative. [5][7] Bacteria in the lactic acid genus are one of the most commonly used microorganisms for fermentation. They are gram-positive, acid-tolerant and have low GC content. They usually produce lactic acid as one of their major metabolic end products in carbohydrate fermentation. [11] In addition, LAB also produces antimicrobial compounds such as organic acids, hydrogen peroxide and bacteriocins, advantageous during fermentation.[10]

Traditionally, stinky tofu is fermented using natural, open fermentation. However, due to sanitary concerns with inconsistent production methods, studies have been done to develop standard starter cultures that decrease the variation between batches and allow for faster, closed fermentation.

In 2002, a new patented production method was developed, which identified and isolated a standardized isolates of microorganisms that gave more reproducible, consistent and well-flavoured production of stinky brine. These microorganisms are mainly composed of Bacillus sp., Enterococcus sp. and Lactobacillus sp. A standardized solution of stinky brine was also created in the patent that allows efficient growth of this standardized culture. The stinky brine composition was 10-30% (w/v) bamboo, 20-40% (w/v) cabbage or amaranth, 30% (w/v) tofu, 5% (w/v) shrimp and 0.5-1.5% (w/v) salt. The addition of shrimp into the mixture is optional. The brine mixture is usually sterilized before inoculating with frozen or freeze-dried standardized isolates. Fermentation of the brine mixture occurs for one month at 30°C using closed fermentation. Then tofu is incubated in the brine for 4-8 hours.[8]

Another study showed lactic acid bacteria may potentially be used as a natural method for food preservation because it can improve food flavours and preservation. In addition, LAB can reduce the allergenicity of fermented foods by using proteolysis that cleaves allergic protein epitopes. [6]