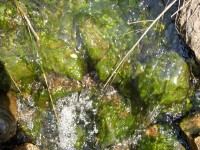 Stream Biofilm. This greenish-brown slime was found on cobbles of the streambed in High Ore Creek, Mont.By USGS.

A biofilm is a complex aggregation of microorganisms growing on a solid surface. Biofilms are usually found on solid substrates submerged in or exposed to some aqueous solution. A stream biofilm is the layer on solid surfaces in a stream, such as rocks, plants and other surfaces. This layer is composed of microscopic bacteria, algae, and protozoans in a complex polymer linked assemblage.

Stream biofilms play an important ecological role in their environment. For one thing, they play a major role in the bottom up supply of energy and organic matter to the food web. Organisms within the stream biofilm can use dissolved organic matter, fix nitrogen or recycle organic nitrogen, fix energy and carbon by photosynthesis and chemosynthesis, and they can be food resource for organisms of higher trophic levels. For example, it has been found that many invertebrate species gain their nutrients from the microbial biofilms in streams consumed in addition to plant debris. For another, stream biofilms are important in recycling organic matter. Microbial biofilms in aquatic surfaces are actively involved in degradation of plant and animal debris, suspended sediment removal, cycling of nutrients, and thus are beneficial for water quality control and aquatic ecosystem maintenance.

The biofilm matrix is a dynamic environment in which the component microbial cells and are optimally organized to make use of all available nutrients. The major matrix components are microbial cells, polysaccharides and water, together with excreted cellular products. The matrix therefore shows great microheterogeneity, within which numerous microenvironments can exist. Although exopolysaccharides provide the matrix framework, a wide range of enzyme activities can be found within the biofilm, some of which will greatly affect structural integrity and stability. Much of the biofilm matrix – perhaps up to 97% – is actually water. The water can be bound within the capsules of microbial cells or can exist as a solvent whose physical properties such as viscosity are determined by the solutes dissolved in it. Apart from water and microbial cells, the biofilm matrix is a complex of secreted polymers, absorbed nutrients and metabolites, products from cell lysis and even particulate material and detritus from the immediate surrounding environment. Thus, all major classes of macromolecule – proteins, polysaccharides, DNA and RNA – can be present in addition to peptidoglycan, lipids, phospholipids and other cell components. The amount of cellular material within a biofilm can itself vary greatly. Table 1 shows range of composition of biofilm matrices.

In freshwater systems, individual species of bacteria can occur as both planktonic (free-floating) and benthic (attached to the substratum) organisms. The equilibrium between these two states depends on environmentals factors such as movement of water and substrate availability. Stream biofilms are composed of nutritionally diverse microorganisms, and many environmental factors can affect the biofilm structure and community composition within a stream, which are characteristic of dynamic temporal and spatial change. These factors include temperature, depth, width, flow rate, pH, dissolved oxygen, nutrients, etc. Nutrients in streams are essential for growth, and the concentration of nutrients and the form they are found in changes continually. The variation of nutrient content varies depending upon land use and many other factors of watershed areas. For example, during the summer, nutrient input may increase due to fertilization of cropland or lawns and gardens. During the winter, high rainfall causes increased wash-off of organic matter such as leaves, twigs, grass, and other debris. Because decomposition of this organic matter releases nutrients, it constitutes an important source of nutrient loading.If the stream is fed by a lake or other water source with naturally high variations in nutrient concentrations, the stream will reflect the same variations too.

A stream is a body of water with a detectable current, confined within a bed and banks. Streams are inherently heterogeneous and are characterized by a largely unidirectional downstream flow of water that controls the dispersal of suspended microorganisms, biofilm community composition, architecture, and metabolism.As physical and chemical characteristics of a stream change greatly, there is continual change of stream biofilm composition and structure.

Gradient: The gradient of a stream is a critical factor in determining its character, and is entirely determined by its base level of erosion. The base level of erosion is the point at which the stream either enters the ocean, a lake or pond, or enters a stretch in which it has a much lower gradient, and may be specifically applied to any particular stretch of a stream.

Meander: Meanders are looping changes of direction of a stream caused by the erosion and deposition of bank materials. These may be somewhat sine-wave in form. Typically, over time, the meanders don't disappear but gradually migrate downstream. If some resistant material slows or stops the downstream movement of a meander, a stream may erode through the neck between two legs of a meander to become temporarily straighter, leaving behind an arc-shaped body of water termed an oxbow lake or bayou. A flood may also result in a meander being cut through in this way.

Stream biofilms are made up of bacteria, archea, fungi, filamentous and single cell algae and diatoms all interspersed among a polymeric matrix produced by the constituent organisms. On and within the biofilm are protozoa, nemotodes and the larvae of macrobentic invertebrates which graze on the autotrophic and saprophytic components. Very efficient cooperations and syntrophic interactions can evolve within a biofilm. In fact, biofilms provide an ideal environment for the establishment of syntrophic relationships. Syntrophism is a special case of symbiosis in which two metabolically distinct types of bacteria depend on each other to utilize certain substrates, typically for energy production. For example, in the degradation of complex organic matter into methane and carbon dioxide, fermentative bacteria initiate the catabolism, producing acids and alcohols that are then readily utilized as substrates by acetogenic bacteria. Finally, the methanogens obtain energy from converting acetate, carbon dioxide, and hydrogen to methane. Also, other microbial interactions such as synergism, competition, predation and commensalism also develops in aquatic biofilms.

Formation of biofilms has been recoganized as the dominant mode of microbial life in most aquatic ecosystems and biological interactions in biofilms provide microorganism a number of benefits. Bacteria within biofilms live within a matrix of excreted polymeric compounds. This matrix protects the cells within it and facilitates communication among them through chemical and physical signals, as well as enables bacteria to remain within a favorable environmental niche. For example, microorganisms in biofilms may withstand nutrient deprivation, pH changes, oxygen radicals, disinfectants and antibiotics more than planktonic bacteria.

There are also important food web interactions with other aquatic organisms.Within stream food webs, biofilms are intensively grazed by protozoa, macrobenthic invertebrates and some fish. Then stream biofilm composition will be modified by the, predation by grazers, as well as physicochemical characteristics of the environment. In turn, the specific microbial composition of the biofilm will modify the nutritional quality of the material for grazing species, and along with habitat factors, will influence the population level and composition of grazing organisms and so on through the food chain.

Many different microbial processes in stream biofilms facilitate nutrient cycling between the biofilm and aquatic environment as well as within the biofilm. Algae and cyanobacteria carry out photosynthesis and capture light energy and produce biomass. Heterotrophic inputs include dissolved, colloidal and fine particulate organic matter. Within the matrix, extracellular release and cell death result in enzymes and other molecular products that are retained due to reduced diffusion rates, and available for utilization by other microorganisms. Nitrogen fixation and conversion is also important processes and contribute to microbial growth and nutrient cycling.