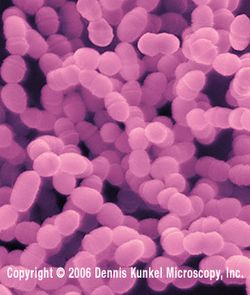 Streptococcus mutans is a Gram-positive bacteria that lives in the mouth. It can thrive in temperature ranging from 18-40 degrees Celsius. It metabolizes different kinds of carbohydrates, creating acidic environment in the mouth as a result of this process. This acidic environment in the mouth is what causes the tooth decay. It is the leading cause of dental caries (tooth decay) worldwide. S. mutans is considered to be the most cariogenic of all of the oral Streptococci (8). S. mutans was first described by JK Clark in 1924 after he isolated it from a carious lesion, but it was not until 1960s that real interest in this microbe was generated when researchers began studying dental caries (8).

S. mutans is very important to study, not only because virtually everyone in the world carrys it, but also it has various symptoms that affect our daily lives. As the bacteria develop in the mouth, they cause tooth destruction, impaired speech, difficulty of chewing, multiple infections, psychological problems such as low self-esteem, poor social interactions, concentration problems, etc. Though not fatal, tooth decay is one of the most common infectious diseases in humans. Also, cavities caused by the bacteria are the reason for half of all dental visits in the U.S. (6).