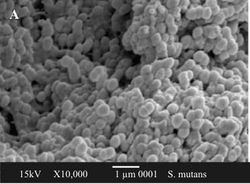 Dental plaque is a biofilm of diverse bacteria and extracellular polymeric substances. It builds up over time and leads to dental caries and periodontal diseases such as gingivitis, a gum inflammation. As many as 400 species of bacteria have been associated with dental plaques, the most common being Streptococcus and Lactobacillus, which are associated with acid formation leading to tooth decay [12]. Multiple related Streptococcus strains such as S. gordonni, S. mitis, and S. mutans have been associated with dental caries [12]. with S. mutans being the major contributor [18] and model organism.

As a part of the Streptococcaceae family and Streptococcus genus, S. mutans is a Gram-positive cocci concentrated in fissures and crevices of the oral cavity [12] and it is the main cause of cariogenesis. The completely sequenced genome of S. mutans UA159 offers many insights into the role of gene expression in virulence and disease pathogenesis in dental plaques [17]. 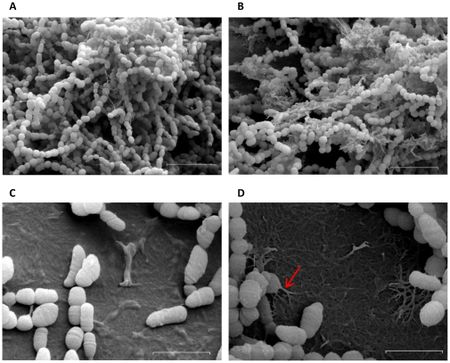 Attachment to teeth is the initial step in plaque formation [7]. S. mutans, a primary colonizer, can use both sucrose-independent and sucrose-dependent attachment mechanisms. The sucrose independent pathway involves the expression of an adhesion molecule called antigen I/II, also known as SpaP [14]. This virulence factor is a fibrillar protein with an adhesion domain which binds to salivary agglutinin [5], a glyprotein coating the tooth surface. The antigen I/II family is also present in S. gordonii and S. oralis with the same function, which offers insight into the similarity of dental biofilm colonizers [15].

The more efficient sucrose-dependent pathway requires glucans, which are polysaccharides of glucose. Glucans mediate S. mutans attachment to tooth surfaces, and are a part of the extracellular polysaccharides involved in cell-to-cell adhesion [9]. S. mutans make 3 types of glucosyltranferases (GTF) – GtfB, GtfC, and GtfD, which synthesize both insoluble and soluble glucan chains from sucrose 9. The optimum cellular ratio of 20:1:4 for GtfB:GtfC:GtfD contributes to glucan products with the highest adhesive ability [16]. In addition, other biofilm colonizers such as Streptococcus sanguinis and S. gordonni have comparable forms GTFs performing similar functions [15].

Glucan-binding proteins (GBP) at the bacterial surface mediate cell-to-cell attachment via glucans (Diagram1). GbpC is involved in glucan-dependent aggregation of cells, while GbpA is essential for biofilm structure integrity and GbpD for biofilm rigidity [2]. 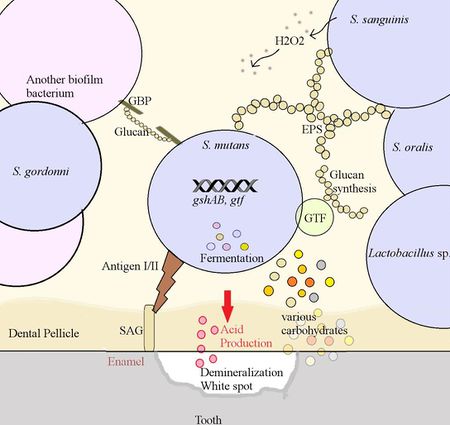 Attachment upregulates the synthesis of carbohydrate metabolism genes. S. mutans can utilize more carbohydrates than any other sequenced Gram-positive organism, which gives S. mutans a competitive advantage [1]. It can ferment carbohydrates such as raffinose, trehalose, and mannitol via the glycolytic pathway to produce pyruvate. Pyruvate is further metabolized into acidic products such as lactic acid and acetate [1], which lower the biofilm pH. Organic acid production remains the main contributor to the mineral loss and decay in teeth [17]. Since acid production contributes to cycles of low pH in biofilms, S. mutans must be highly acid tolerant. This trait is attributed to the FoF1 ATPase, which pumps out extra protons to maintain intracellular pH at 7.5 [17]. Increased cell density detected by quorum sensing proteins during the log phase of growth further induces S. mutans to produce acid tolerance responses [11].

Mutual and cooperative interactions in biofilms are essential for ecological balance, but species often compete for space and nutrients. The dominant growth of a few competitive species such as S. mutans often leads to disease pathogenesis. S. sanguinis, which coexists in the biofilm, keeps S. mutans in check by producing harmful H2O2 [10]. S. mutans counteracts with the expression of gshAB, a recently discovered gene involved in detoxifying H2O2 [20]. The specific mechanism is still under research. S. mutans also produce bacteriocins, also known as bacterial toxins. For example, S. mutans UA159 can synthesize mutacin V and IV [6]. In a multispecies community, mutacin gives a competitive advantage by excluding other organisms, but the high cost of mutacin synthesis can slow down growth. Thus, in carbohydrate-rich environments, S. mutans channel energy towards growth instead of microbial antagonism [10].

Although largely preventable, plaque formation resulting in dental caries is the most prevalent infectious disease [1]. Research has associated low exposure to dietary carbohydrates to low S. mutans numbers, and high carbohydrate diets to high numbers. Hence, an increase in carbohydrate level increases the growth of S. mutans, and an increased number of S. mutans is strongly correlated with a high rate of cariogenesis [18].

Research is being conducted on gene expression, with molecular techniques being employed to investigate the relationship between S. mutans and other microorganisms of the oral cavity. For example, a recent study examined the interaction of Candida albicans (a fungus) and S. mutans in cariogenesis [13]. Moving beyond S. mutans, an investigation on biofilm community composition has found more culprits to cariogenesis, an example being Veillonella, a Gram-negative acid-producing cocci [4]. Moreover, prevention methods are being evaluated, such as a study on the anti-caries properties of plant extracts [8]. These studies will hopefully lead to new treatments and the development of anti-caries agents.