A Microbial Biorealm page on the genus Streptococcus pneumoniae 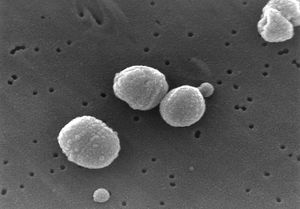 Streptococcus pneumoniae are Gram-positive bacteria in the shape of a slightly pointed cocci. They are usually found in pairs (diplococci), but are also found singly and in short chains. S. pneumoniae are alpha hemolytic (a term describing how the cultured bacteria break down red blood cells for the purpose of classification). Individual bacteria are between 0.5 and 1.25 micrometers in diameter. S. pneumoniae do not form spores and are non-motile, though they sometimes have pili used for adherence. (5) S. pneumonia are found normally in the upper respiratory tract, including the throat and nasal passages. (2) They are mesophillic, living optimally at temperatures between 30 and 35 degrees Celsius.

S. pneumoniae was isolated in 1881 by Louis Pasteur. The species was then known as pneumococcus due to its role in the disease, pneumonia. It was termed Diplococcus pneumonia in 1926 due to its propensity to exist in pairs of cells, and renamed Streptococcus pneumoniae in 1974 because of its formation of chains in liquid.

S. pneumoniae played a significant role in the history molecular genetics, being the subject of the experiments that gave birth to the field. In 1928 Frederick Griffith transformed live, harmless S. pneumoniae into a deadly strain by combining them with an extract from heat-killed, virulent S. pneumoniae. Further, in 1944, Avery, MacLeod, and McCarthy proved that genetic material is DNA by showing that the transforming factor in Griffith's experiments was not protein, but DNA. (7)

The genome ofS. pneumoniae D39, the virulent strain used in the revolutionary experiments of Griffiths and McCarthy, consists of a single circular chromosome with about 2 million base pairs. Its GC content is 39.7%, and it codes for 1914 proteins and 73 RNAs. (2) Several surface proteins have been identified that may serve as vaccine candidates. Several different strains of Streptococcus pneumoniae have been identified, possibly accounting for differences in virulence and the presence of antigens. (1)

S. pneumoniae has shown a significant increase in antibiotic resistance over the past 20 years. This is likely due to its use of a natural transformation system used for genetic exchange. It can also develop resistance to antibiotics through mutation and natural selection. S. pneumoniae has a relatively fast growth rate and reaches great cell densities in infections environments, conditions which favor natural transformation and natural selection toward antibiotic resistance. (5)

Streptococcus pneumoniae is characterized by a polysaccharide capsule that completely encloses the cell, and plays a key role in its virulence. The cell wall of S. pneumoniae is composed of peptidoglycan, with teichoic acid attached to every third N-acetylmuramic acid, and is about 6 layers thick. Lipoteichoic acid is attached to the membrane via a lipid moiety, and both teichoic and lipoteichoic acid contain phosphorylcholine. Two choline residues may exist on each carbohydrate repeat, which is important to S. pneumniae because the choline adheres to choline-binding receptors located on human cells. (5)

S. pneumoniae contains more than 500 different surface proteins. A notable group is the family of choline-binding proteins (CBPs). Twelve of these are bound to the choline moiety of the cell wall and assist in attaching various functional elements onto the surface of the cell. Among the CBPs are found important determinants of virulance, including PspA (protective antigen), LytA, B, and C (autolysins), and CbpA (adhesin). (5)

S. pneumoniae lacks catalase and ferments glucose to lactic acid, like most other streptococci. However, unlike most other streptococci, it does not display an M protein and it hydrolyzes insulin. (5) S. pneumoniae gets a significant amount of its carbon and nitrogen through extracellular enzyme systems that allow the metabolism of polysaccharides and hexosamines, as well as cause damage to host tissue and enable colonization. (1)

S. pneumoniae has the ability to enzymatically disrupt and disintegrate itself. This enzyme, an autolysin, causes a culture of S. pneumonia to undergo an autolysis, which kills the entire culture during the stationary phase (the phase in which growth slows due to exhaustion of available nutrients and buildup of toxins). With initial growth beginning in optimal conditions, autolysis usually begins within 18-24 hours, with colonies collapsing in the centers. (5)

Streptococcus pneumoniae is found in the respiratory tracts of mammals. While it is part of the normal flora of this environment, going unnoticed when present in small densities, it acts as a pathogen toward its host when present in large enough densities.

Streptococcus pneumoniae is known to cause bacteremia, otitis media, and meningitis in humans, though it is best known for causing pneumonia, a disease of the upper respiratory tract that causes illness and death all over the world. (5) Symptoms of pneumonia include a cough accompanied by greenish or yellow mucous, fever, chills, shortness of breath, and chest pain. The bacteria enter the body most commonly via inhalation of small water droplets. Very young children and the elderly are the most prone to catching pneumonia.

The virulence factors of S. pneumoniae include a plysaccharide capsule that prevents phagocytosis by the host's immune cells (5), surface proteins that prevent the activation of complement (part of the immune system that helps clear pathogens from the body), and pili that enable S. pneumoniae to attach to epithelial cells in the upper respiratory tract. (4)

The polysaccharide capsule interferes with phagocytosis through its chemical composition, resisting by interfering with binding of complement C3b to the cell's surface. Encapsulated strains of S. pneumoniae are found to be 100,000 times more virulent than unencapsulated strains during invasion of mucosal surfaces. (5)

Pili are long, thin extracellular organelles that are able to extend outside of the polysaccharide capsule. They are encoded by the rlrA islet (an area of a genome in which rapid mutation takes place) which is present in only some isolated strains of S. pneumoniae. These pili contribute to adherence and virulence, as well as increase the inflammatory response of the host. (4)

Streptococcus pneumoniae is mainly found in the lab for the purpose of creating a vaccine against it. It is today the most common infections agent leading to hospitalization in the world. There are 90 different capsular types of S. pneumoniae, so a vaccine that is based on polysaccharide alone will not work. The most feasible vaccines against this bacteria work against different highly prevalent subgroups. In 1945, there were 4 targeted subgroups, which rose to 14 in the 1970's, and finally to the current vaccine that targets 23 subgroups. These 23 targeted types represent 85-90% of the virulent types, and the vaccine has an efficiency of around 60%. However, utilization of this vaccine remains very low considering the number of S. pneumoniae infections around the world. (5)

Pneumonia caused by S. pneumoniae is most prevalent in poorer countries, increasing the need for an economical and effective vaccine. A potential candidate is the bacterium Lactococcus lactis, which produces the S. pneumoniae surface protein A (PspA). Exposure to this antigen may stimulate antibody production effective against S. pneumoniae, offering an economical alternative to current options. (3)

Streptococcus pneumoniae remains actively virulent in today's world with an increasing resistance to antibiotics. The genome sequences for a few different strains have just been mapped, including the capsulated, virulent strain D39 and the unencapsulated, avirulent strain R6. Comparisons of the different strains expose modern mutations and information about regulation, metabolism, and virulence in the bacteria. (2)

Due to a continuing increase in S. pneumoniae's antibiotic resistance, the search for a better vaccine is ongoing. Research on the Lactococcus lactis bacteria for use as a vaccine is promising; its production of the pneumococcal surface protein PspA makes it a good candidate for a mucosal vaccine, which could be administered through the nose instead of an injection (a promising aspect). Studies show that the lactococcal vaccine offers better protection against respiratory infection by S. pneumoniae than injections of similar amounts of recombinant PspA administered by injection. There is considerable potential to develop a vaccine with L. lactis, for use against S. streptococcus and more. (3)

6. Lysenko, E., Ratner, A., Nelson, A., Weiser, J. "The role of innate immune responses in the outcome of interspecies competition for colonization of mucosal surfaces". PLoS Pathogens. 2005. Volume 1. p. 1.