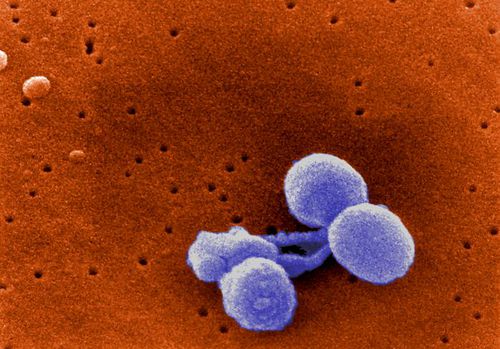 Penicillin became available in the 1940’s, and physicians treated pneumococcal infections successfully with this antibiotic [1]. However, in the 1960’s antibiotic-resistant Streptococcus pneumoniae were found in human beings (Hansman et al. 1974). By the late 1970’s, many Streptococcus pneumoniae were found to resistant to additional types of antibiotics (Jacobs et al. 1978). Today, there are S. pneumoniae found all across the planet that are resistant to multiple drugs and antibiotics (Hennessy et al. 2002).

One method to prevent infection by S. pneumoniae is to use polysaccharide vaccines, and these have been available in the U.S. since 1977. This is currently the best method to prevent pneumococcal infection in people with Sickle Cell Anemia, HIV, and high-risk medical conditions. Of the Streptococcus pneumoniae strains that cause disease, 88 % can be prevented when the 23-valent polysaccharide vaccine is used. However, these 23-valent polysaccharide vaccines (the 23 serotypes most likely to cause invasive disease) are not effective in young children, who are at relatively high risk of infection compared to most of the population. A 7-valent protein polysaccharide conjugate pneumococcal vaccine (Prevnar), which is effective in young children, became available in 2000. The State of Alaska made the pneumococcal conjugate vaccine available in 2001, and this led to a 90% decrease in the rate of pneumococcal disease among Alaska Native children [1].


Since the nearly global overuse of antibiotics, specifically in developed nations, has led to a staggering, rapid increase in the number of multidrug-resistant bacteria, another technique to prevent further pneumococcal infections is to monitor and potentially regulate the use of antibiotics [1]. There have been multiple studies that have reported that repeated and extensive antibiotic use is correlated with a high number of human carriers of antibiotic-resistant Streptococcus pneumoniae (Hennessy et al. 2002). Looking to the future, the most efficacious method to decrease multidrug-resistant S. pneumoniae and prevent untreatable pneumococcal infections is developing a way to responsibly utilize antibiotic drugs (Hennessy et al. 2002). If the overuse of antibiotics continues unchecked as it has throughout the last several decades, then there is a possibility that multidrug-resistant bacteria will reach an insurmountable number.


Supplies of the pneumococcal conjugate vaccine are inadequate, and the 23-valent polysaccharide vaccine is underused [3]. In order to prevent infections in adults and children, the use of both the 23-valent polysaccharide vaccine and the pneumococcal conjugate vaccine respectively must undergo expanded implementation. Furthermore, the increase of vaccination may lead to a decrease in drug-resistant pneumococcal carriage. If less people get infected because they got vaccinated, then the use of antibiotics may decrease, which in turn could put a stop to the increasing number of antibiotic-resistant bacteria.

Many human beings carry non-pathogenic Streptococcus pneumoniae in their nasopharynx. However, when this bacteria becomes virulent and causes infection, especially in the normally sterile brain and cerebral spinal fluid, leading to pneumococcal meningitis, there can be dire consequences. Meningitis can result in several grave neurological conditions and even death. In fact, the brain damage is thought to be mostly attributable to the host’s inflammatory response the infection. Typically bacterial meningitis is treated with a cocktail of antibiotics, but recently there has been a surge in the number of multidrug-resistant S. pneumoniae, arising due to overuse of antibiotics. These resistant strains of pneumococcus are much harder to treat. Therefore, antibiotic use must be monitored and better inhibitors of host inflammatory systems must be developed in order to make pneumococcal meningitis more manageable and more treatable.