A Microbial Biorealm page on the genus Streptococcus sobrinus 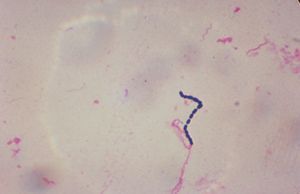 From the genus Streptococcus, Streptococcus sobrinus is an anaerobic, spherical shaped, Gram positive bacteria. They grow in pairs or chains and are nonmotile, nonsporeforming. (1) Bacteria from this genus are usually pathogenic to humans and the S. sobrinus in particular lives in the tooth cavities of humans. Streptococcus was first discovered and isolated by the French biologist Louis Pasteur in 1887 when a few other human pathogens were discovered at the same time and treated to better the health of the general public. First efforts in attempts for sterilizing this genus of pathogens happened 2 years later in 1889.

Both Streptococcus sobrinus and Streptococcus mutans are found in high quantities in the form of biofilm or plaque in patients with dental caries. Since S. sobrinus play an important role in tooth decay along with S. mutans, they are both hot topics of research in oral hygene in preventing/limiting their growth on teeth and methods of treatment after they establish a habitat on decaying teeth.

As of August 2007, the complete genome of S. sobrinus has not been entirely sequenced, but it’s a work in progress and should be completed soon since its closest related species, S. mutans, has its whole genome sequenced already. Due to its incompletion, not much information is known about the genome other than it is circular, similar to the rest of the Streptococcus branch of bacteria. Scientists at the Iwate Medical University School of Dentistry, Department of Pharmacology are currently developing the genome of S. sobrinus. (3)

Analysis of the 16S rRNA gene and observations in development of proteins are two of the methods used to map out the eventual complete genome sequence. The 16S rRNA study reveals that the genome contain over 1300 ORFs (2) and early indications on the study of the enzymatic activity illustrates that S. sobrinus metabolizes a high rate of lactic acid production, given in the ideal environment for growth.

Similar to other Streptococcus, S.sobrinus is a spherical, anaerobic, Gram positive bacteria. The optima growth for S. sobrinus is 37°C and strives in low pH environments (6.3) The human mouth create an ideal habitat for S. sobrinus because it supplies the organism with an acidic environment with plenty of sources of food in the form of food sugars (primarily consists glucose/sucrose).

S. sobrinus is classified as a lactic acid bacteria. In addition to living in acidic environments, this organism also produces its own lactic acid as a byproduct of anaerobic metabolism of glucose. This process produces sufficient ATP for this organism to hydrolize and convert into version of energy used for growth and further metabolism. This byproduct of lactic acid plays an important role in the dental caries problems (See Pathology for more details) as it’s one of the main reasons why this organism is considered a human pathogen.

Like most human pathogens, S. sobrinus have difficulty in growth and survival outside of the animal hosts. S. sobrinus usually interact with S. mutans in a symbiosis relationship when biofilm develop from the mass of colonies for both bacteria. “MS (mutans streptococci), consisting mainly of the species S. mutans and S. sobrinus, are commonly cultured from the mouths of infants with prevalence of infection ranging from around 30% in 3 month old predentate children to over 80% in 24 month old children with primary teeth. Factors that affect the colonization of MS may be divided into bacterial virulence, host-related and environmental factors”. (7) Studies have shown that high consumption of sugars by children increased the rate of bacterial growth and settlement on the pits and fixture of teeth that ultimately develops to tooth decay if not treated properly.

Pathology and Application to Biotechnology

The only known disease causing element from S. sobrinus is usually in combination with S. mutans on decaying teeth of humans and certain species of rats. Biofilm of the two organisms form from a mix of sugar, built up of plaque, and growth of colonies due to ideal growing conditions in a highly acidic environment. Lactic acid (from fermenting sugars by the bacterias) and built up plaque eat through the enamel protection layer of the teeth, which results in cavity formation.

In a June 2007 study, a plant lectin is discovered to inhibit bacteria adherence in saliva coated regions. “We evaluated the ability of lectin from Talisia esculenta (TEL) and a protein from Labramia bojeria seeds (Labramin) to inhibit adherence of microorganisms and exert antimicrobial effects.” (8) 4 other bacteria along with S. sobrinus were used in an adherence assay to test for inhibition effects. The results showed that neither TEL nor Labramin inhibited the growth of any microbes, but results also indicated that Labramin had the potential to inhibit the adherence to both S. mutans and S. sobrinus, which will be a breakthrough for biofilm inhibiting drugs.

Dental caries caused by plaque and lactic acid build up on human tooth.

This study evaluates if colonization of these two organisms can be transmitted through vertical tranmission and identify if the genotypic and stability of the strains have any correlation when mothers pass down to their children. For 20 months, 16 mother-child pairs saliva samples were taken and passed through PCR method to identify genotypic characterization. Many of the strains in the two bacteria were genetically similar (upwards of 80%) and suggests that both strains can be easily passed down through vertical transmission. The results also illustrated that there is a higher persistence in oral cavity in these strains that were passed down to the children through vertical transmission, which leads to increase incidents of oral microbiota in children.

Streptococcus mutans glucosyltransferases (GTF) are effective components in vaccines for dental caries. A few selected peptide subunits of GTF is used to test the immunoreactivity in a rodent test subject. An ELISA assay is done to test the reactivity of the immunoglobulin G antibody with peptide 6 and 11 (GTF) and T-cell response to peptides 6, 9, 11, and 16. Rats that were immunied with multiple antigenic peptide (MAP) 11 elicit a strong immune response and inhibit GTF function while the others also had a moderate response. The MAP 11 and 16 groups were infected with Streptococcus sobrinus and both significantly reduced in dental caries. This experiment offered a source of protection against dental carries infection after this immunization method, which would mean that this peptide can play an important role in subunit dental caries vaccine.

A few proteins from S. sobrinus supernatants bind to Sephidex G-75. Alpha 1,6 glucan partially eluted the proteins and 4 M guanidine HCl eluted the rest of the solution. Proteins from 16, 45, 58 to 60, 90 135, and 145 kDa yielded from the elution process which shows that there are wild type strains of S. sobrinus that contain quite a few glucan-binding proteins. Two mutants that were incapable of aggregating to alpha 1,6 glucan were isolated and through gel electrophoresis, both mutants were discovered to be devoid of 60 kDa protein. Both mutants, however, retained their regular mebabolism of sugar and glucosytransferase activities. The results show that despite having multiple proteins that can bind to alpha 1,6 glucan, the 60 kDa protein is needed for glucan-dependent cellular aggregation.