A Microbial Biorealm page on the Streptomyces 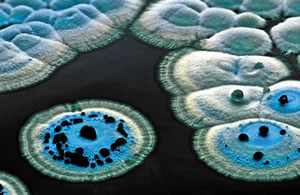 Streptomycetes are the most widely studied and well known genus of the actinomycete family. Streptomycetes usually inhabit soil and are important decomposers. They also produce more than half of the world's antibiotics, and are consequently invaluable in the medical field.

The entire genome of Streptomyces coelicolor was sequenced as of July 2001. The linear chromosome is 8,667,507 bp long and is predicted to contain 7,825 genes, about twice as many as typical free-living bacteria, making it the largest bacterial genome yet sequenced. The linear chromosome replicates from a central origin. The single chromosome also has a unique telomere structure. During replication the 5' end of the chromosome remains incomplete, resulting in a single strand of DNA at each end. The single strands have several replicating sequences that double over to form hairpin structures at either end of the chromosome, forming protective telomeres (Goshi et al.). Streptomyces avermitilis was also been sequenced in October 2001. It is 9,025,608 bp long, and has 7,575 ORFs assigned. This organism is a well known producer of the anti-parasitic agent avermectin which is widely used to rid livestock of worm and insect infestations and to protect large numbers of people from river blindness in sub-Saharan Africa. There are also two genome projects in the works for Streptomyces scabiei and Streptomyces ambofaciens.

The filamentous mycelium of Streptomyces. From: Natural Resources Conservation Service.

Streptomycetes resemble fungi in their structure. Their branching, filamentous arrangement of cells form a network called a mycelium. They are able to metabolize many different compounds including sugars, alcohols, amino acids, and aromatic compounds by producing extracellular hydrolytic enzymes. Their metabolic diversity is due to their extremely large genome which has hundreds of transcription factors that control gene expression, allowing them to respond to specific needs.

In addition to echoing fungi in their cellular structure, streptomycetes also resemble fungi in their elaborate life cycle. During the vegetative growth stage of streptomycete development, DNA replication takes place without cellular division, creating the previously mentioned filamentous structure. Streptomycetes reproduce and disperse through the formation of spores, called conidia, which follows the period of vegetative growth. The spores are produced in aerial filaments called sporophores, which rise above the colony. Because the complex life cycle of streptomycetes resembles that of multicellular eukaryotes, it enables researchers to study the development of these more complex systems using a simpler system.

Streptomycetes are found worldwide in soil, and are largely responsible, through the secretion of chemicals called geosmens, for the earthy smell of soil. streptomycetes consequently play an important role in the degradation of organic matter, most commonly noted in compost piles.

Several species of Streptomyces are involved in a symbiotic relationship with species of ants in the genus Attini. Attine ants cultivate fungus in, what are termed fungal gardens. They perform all the motions of human farmers, weeding, and nurturing their gardens. The small bacterium in the streptomyces genus inhabits the cuticles of the ants, and aids in weeding their fungal gardens. Streptomycetes produce toxins that keep the main weed in ant fungal gardens, another fungi, Escovopsis, at bay.

Because streptomycetes inhabit soil, they are mainly phytopathogens, known for attacking root vegetables, such as potatoes, beets, radishes, rutabaga, turnips, carrots, and parsnip. Most commonly found on potatoes, Streptomyces scabies creates a condition known as "common scab," which manifests itself as sores on the external surface of the potato. The scabs do not harm the meat on the the inside of the potato but create an extremely unpleasant appearance that devalues the potato. 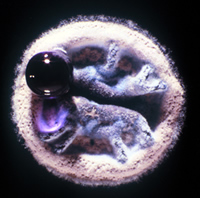 An antibiotic droplet secreted from a Streptomyces colony. From: Higher Education and Research Opportunities, the John Innes Centre.

The blue haloes surrounding these Streptomyces coelicolor colonies are secreted actinorhodin, an antibiotic (not yet used clinically). From: The John Innes Centre.

Streptomycetes are most widely known for their ability to synthesize antibiotics. Over 50 different antibiotics have ben isolated from streptomycetes, providing most of the world's antibiotics. With the newly sequenced genome of Steptomyces coelicolor comes the possibility of deriving still more antibiotics that have so far remained undiscovered.

The genes of the unusually large genome of Streptomyces coelicolor are grouped together in clusters, each cluster making a different antibiotic chemical. The genome contains around 20 clusters, of which only four were previously known. Projects to use the genome data in the synthesis of new antibiotics are already underway. Many of these projects are focusing on the possibility to using genetic engineering to to create entirely new chemicals by splicing together machinery from the numerous templates provided by Streptomyces coelicolor.

Bleomycin is an antibiotic drug with anticancer properties produced by Streptomyces verticillus. It was isolated in 1966 by Umezawa et al. and its mechanism of action is breaking the DNA double helix by the production of free radicals. It is used for malignant tumors, specifically germ cell tumors, lymphomas, head and neck and Kaposi's sarcomas.

files/JBac02-3411.pdf Goshi et al. 2002. Cloning and analysis of the telomere and terminal inverted repeat of the linear chromosome of Streptomyces griseus. Journal of Bacteriology, June: 3411-3415.