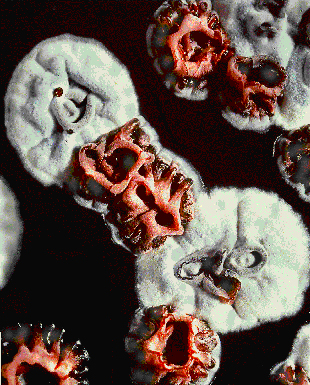 Streptomyces species produce a majority of the antibiotics that have been discovered, so they are very importnat to biotechnology and the development of new antibiotics. Streptomyces coelicolor produces a number of different antibiotics, a few of which will be discussed here. Clorobiocin is an antibiotic that greatly inhibits DNA gyrase. It is not in use pharmacutically at this point, but it may be used as a starting material to make new antibiotics. Production of clorobiocin is controlled in part by the cloY gene, and is similar to a mtbH gene present in Mycobacterium tuberculosis. Undecylprodigiosin, also known as Red because of its red color, is a type of prodiginine produced by Streptomyces coelicolor and is used as anti-tumor agent and an immunosupressant. Production of undecylprodigiosin is controlled by red genes. Actinorhodin is another antibiotic produced by Streptomyces coelicolor. This antibiotic is a pH indicator that turns red under acidic conditions and blue under basic conditions, and was very helpful in isolating Streptomyces coelicolor organisms. Currently, actinorhodin alone is not used pharmaceutically, but the genes coding for actinorhodin production have been used recombinatorially in other species to form new antibiotic derivatives.