A Microbial Biorealm page on the genus Streptomyces griseus 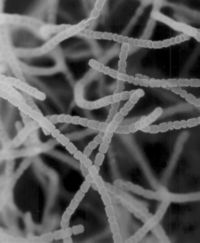 The first person to isolate Steptomyces griseus was Krainsky in 1914 during the outbreak of World War I from Russian soil.(2) In 1915, Dr. Selman A.Waksman, a microbiologist at the Agricultural Department of Rutger’s University, along with an assistant were studying actinomycetes when they isolated from New Jersey soil a strain in which they called Actinomyces griseus.(3) Dr. Waksman was studying how certain substances enabled soil microbes to destroy each other and streptomyces, he found was able to survive in the soil even under unfavorable conditions. In 1943, Actinomyces griseus was changed to Streptomycin griseus. That same year, Albrez Schatz, an assistant of Dr. Waksman, isolated two actinomyces strains which proved to be identical to the strain discovered in 1915, yet somehow these two new strains had antibiotic behavior. Dr. Waksman named this antibiotic “streptomycin.” It was later determined that the S.griseus strain that give rise to the antibiotic was able to produce two variants, one in which had antibiotic activity and had no antibiotic activity. Waksman along with Schatz and Bugie, found streptomycin to be particularly effective against the tuberculosis bacteria, tubercle bacillus. Feldman and Hinshaw, two physicians from the Mayo Clinic in Rochester, studied streptomycin’s effect in guinea pigs with tuberculosis and eventually in human tuberculosis. Feldman and Hinshaw found streptomycin to be effective in curing two extreme classes of tuburculosis: tuberculous meningitis and military tuberculosis.(2) In 1952, Dr. Selman Waksman was awarded the Nobel Prize in Physiology or Medicine for his discovery of streptomycin as the first antibiotic effective against tuberculosis. (3)

Streptomyces griseus’ genome sequence consists of a total of 8, 545, 929 base pairs. (4) S. griseus’ contain very large linear chromosomes. S. griseus have a very high GC content that make up about 70%-74% of their DNA. It is hard to construct a map of S. griseus’ chromosomes because of their genetic instability. Streptomyces in general, undergoes DNA rearrangements such as amplification and deletion especially at their extremities. (11) The genome of S. griseus is currently being sequenced by the University of Tokyo. Plasmids from S. griseus are very ideal to use because of the diverse metabolism of S. griseus and the potential for them to be used as cloning vectors in genetic manipulation. pSG1 is a 16.6 kb long plasmid in S. griseus that can exist in two maintenance states: as a free plasmid or used in an integrated sequence.(13) The importance of pSG1 is still unclear.

S. griseus has a thick peptidogylcan layer and lipids stretching its cell wall making it a permeability barrier. When S. griseus was treated with lyzozyme for six hours, the cells did not die and was still able to grow. This shows that lyzozyme was not able to reach the murein. ll-Diaminopimelic acid is an important part of the murein in S. griseus and can be a defining factor in determining similaries with other bacteria. In the cell wall of S. griseus there is a wide water filled channel that contains a binding site for the antibiotic streptomycin. The cell wall of S. griseus has a lower density than the cytoplasmic membrane. (7) 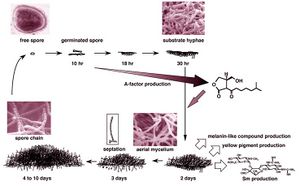 The life cycle of streptomyces griseus courtesy of Sueharu Horinouchi, University of Tokyo

S. griseus have a substrate and an aerial mycelium. The aerial mycelium has modes of branching that eventually leads these hyphae to form chains of spores called arthospores. (1) The A-factor involved in secondary metabolism and morphological differentiation is also responsible in triggering the formation of aerial mycelium. When less than 5 µmol of cAMP was added to a disc containing S. grieus, there was rapid aerial mycelim formation however, any amount greater than 5 µmol of cAMP will inhibit this activity. This evidence suggests that cAMP might be part of a regulatory pathway to control physiological functions. (8)

The preferred carbon source for S. griseus’ production of streptomycin and for growth are as follows in order of preference : glucose, mannose, starch, dextrin and manitol. L-asparagine and L-histidine are good sources of nitrogen for the production of candicidin, an antibiotic that S. griseus also produces found to be effective against Candida infections. Potassium, phosphate-phosphous, sulfate-sulfur, zinc and iron are also essential for the production of candicidin. (9) Streptomyces griseus can obtain its nitrogen from both organic and inorganic sources.

S. griseus’ life cycle is very complex. Their lifecycle comes to completion with spore formation. S.griseus sporulates very well when placed in liquid culture. (11) They can form endospores when nutirents are low. (1)

Since S. griseus are gram positive bacteria, their filamentous mycelia are close enough to each other that the two S. griseus are able to communicate. (4) The ability to signal between the two physically separate S. griseus bacteria in the same mycelium can be attributed to hormonal regulation. S. griseus along with other species in their genus have an A-factor that stimulates streptomycin production and aerial mycelium formation.. A-factor homologs that have a γ-butyrolactone structure have receptors that are highly specific to aid in discriminating signals received from neighboring organism thus allowing the cell to recognize the neighbor as a member of its own species or not. This system is also useful in the survival of in the ecosystem because A-factor produced by a cell is received by several hyphae and can result in rapid sporulation of whole populations. (4) The A-factor and its receptor system acts as a crucial switch for physiological and morphological differentiation.

Streptomyces’ varied metabolism allows them to break down insoluble remains of other organisms and compounds including compounds such as chitin and lignocellulose. (1)

From current research, S. griseus does not cause any disease. (1)Though S. griseus can produce useful antibiotic, they also have strains that produces toxin. One of these toxin is valinomycin, an ionophore that carries K+, was found in indoor air and dust. Valincomycin can cause apostosis in NK cells and mitochondrial swelling in peripheral blood lymphocytes. (12) Some side effects of valincomycin can include hearing lost, renal toxicity and dizziness.(16)

Besides the obvious antibiotic that S. griseus produces (streptomycin), S. griseus also produces many more antibiotics and useful enzymes. FDM A, an antitumor antibiotic is also derived from gene clusters of S. griseus. FDM A, besides being effective against P388 mouse leukemia, is able to form a stabled oxidized free radical when exposed to oxygen contributing to its cytotoxcity characteristic. Recent research indicates that FDM A might be an effective irreversible inhibitor against peptidyl-prolyl cis-tran isomerase (PIP) one of which is Pin1 shown to be an important regulator of the tumor suppressor p53 when DNA is damaged. This discovery hints to FDM A as a new candidate for anticancer research. (6)

S. griseus also secretes different types of hydrolytic enzymes. S. griseus serves as a source of a commercial enzyme preparation known as Pronase. Pronase has some proteolytic activity. From this Pronases, chymotrypsin like serine protease can be isolated, one of which is named S. griseus protease C. (SGPC) (15)

Streptomyces griseus was recently found to produce odor-active metabolites and compounds that give the off-flavor in apple juice when it is spoiled. The presence of S. griseus in soil gives it its property to spoil water and various foods. S. griseus’ growth rate was also shown to be limited when lower oxygen was supplied; however, there was still sufficient growth of cells to cause spoilage. Of the thirteen odor-active metabolites of S. griseus, only four was shown to give apple juice the off-flavor when it is spoiled. Alicyclobacillus acidoterrestris was also studied as a spoilage bacterium. Both bacteria were tested together to see how contamination of both strains will effect off-flavor formation. It is expected to see that A. acidoterrestris’ growth will be reduced because of S.griseus’ antibiotic properties; however, S. griseus’ growth was also limited. This result was probably due to competition between the two bacteria for nutrient. Further research needs to be done to determine the potent odorants and also the concentration needed to reach the threshold of where S. griseus can detected. (10)

Recent research has found that the rare earth, scandium could cause overproduction of antibiotics in the genus streptomyces. Scandium causes overproduction of streptomycin when adjusted to the right amount. Scandium when introduced to S. griseus will inhibit its growth, however, when cultured on SPY medium with more than 5mM of MgSO4, scandium can cause increase in production of streptomycin on the medium.Scandium is being investigated to see if it acts on the ribosome and if it somehow regulates the ribosome’s activity.(5)