Difference between revisions of "Styrene metabolism in bacteria"

Styrene is an aromatic compound with many industrial uses. It is the building block of polystyrene, which is used in various consumer and industrial goods ranging from foam containers and packaging material (commonly known as "Styrofoam") to plastic containers such as CD cases and Petri dishes.

Although styrene and its derivatives are useful, they pose significant environmental problems as styrene has been found to be toxic 11. Current industrial methods for producing styrene are energetically expensive[2,3], and industrial uses of styrene often release styrene into the environment. Polystyrene is highly recalcitrant and persists in the environment, and is usually disposed of by incineration or accumulation in landfills. Styrene and polystyrene pose problems in energy consumption, pollution and waste management, so there is great interest in using microorganisms as inexpensive tools for addressing these problems.

There many bacteria that can use styrene as an energy and carbon source, but most research has focused on a few species, namely Pseudomonas putida, Rhodococcus opacus and Pseudomonas fluorescens. Styrene catabolism is dependent on oxygen availability, and occurs in the absence of more favourable catabolic substrates.

The most commonly described pathway for styrene degradation involves the oxidation of styrene to phenylacetate, which is then converted to TCA cycle intermediates. This pathway is shown below:

The upper pathway enzymes are encoded by the styABCD operon in strains of Pseudomonas and Rhodococcus.

Finally, another gene, styE, has been observed in some strains of Pseudomonas[6]. It appears to encode an ATP-dependent styrene transporter, and is part of the same operon as the styABCD genes.

The lower pathway of styrene degradation is initiated by phenylacetate coenzyme A ligase. Pseudomonas putida possesses three genes for this enzyme, of which one gene, paaF2, is transcribed in the presence of styrene. 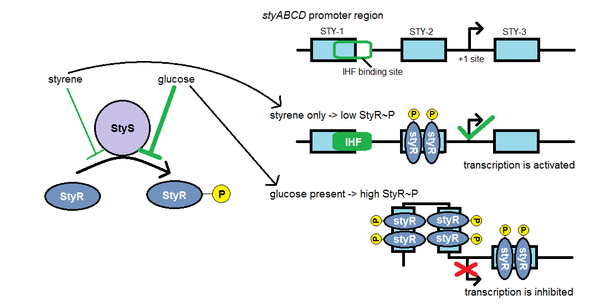 Regulation of the styABCD operon.

The StyS protein is a sensor kinase that phosphorylates the response regulator, StyR, in response to styrene concentration. StyS has been shown to have two sensor domains and two kinase domains, which suggests that it may respond to two different signals. In addition to styrene, the other stimulus is hypothesized to be a high redox potential (indicating the presence of a more energetically favourable substrate such as glucose).

In the presence of styrene, StyS phosphorylates StyR at a low level, resulting in low levels of StyR~P, which promotes transcription of the operon. However, in the presence of a more favourable metabolite such as glucose, StyS phosphorylates StyR more rapidly, resulting in high levels of StyR~P, which inhibits transcription of the operon. In this way, styrene degrading bacteria can control their use of styrene so that they only degrade it in the absence of more favourable metabolic substrates.

Styrene-degrading bacteria could potentially be used in bioremediation of styrene pollution. A biofilter consisting of Brevibacillus sp. has been shown to remove 3 kg of styrene in a day[7], and Rhodococcus ruber has been shown to form biofilms on polystyrene and partially degrade it[8].

A team of researchers has also devised a two-step process for the conversion of polystyrene into polyhydroxylalkanoates, by converting polystyrene into styrene oil using pyrolysis and adding it to a fermentor containing Pseudomonas putida[9][10]. Polyhydroxylaalkanoates are naturally synthesized by bacteria in response to stress, and can be used as a biodegradable thermoplastic.[1]