Subsurface lithoautotrophic microbial ecosystems (SLiMEs) are hydrogen-driven communities of microorganisms that exist within the subsurface of planet Earth, an environment isolated from the surface [9]. SLiMEs can exist in both the shallow (<50 m below surface) and deep (>50 m below surface) subsurface, with the elevation affecting the type of microbial systems present [11]; [4]. Photosynthetic activity is absent as light does penetrate surface layers, be it soil, sediment, or rock. Despite the lack of phototrophic organisms, some SLiMEs have evolved to mirror the “ecosystem paradigm centred around primary producers and consumers. [11]; [7]. Two types of systems have been proposed for SLiMEs: detrital systems and productive systems [11]. 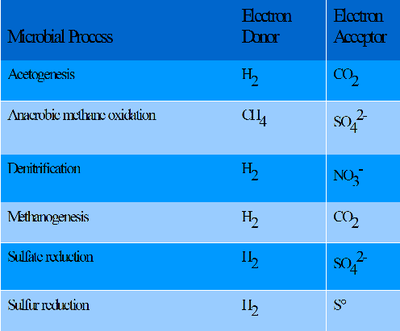 Most energy in this system is derived from organic matter created from surface-exposed phototrophs, which, over time deposited to the subsurface via burial by sedimentation [11]. The organisms in a detrital system are primarily heterotrophic and however nutrient supply is very limited [6]. Furthermore, low-molecular weight organics are preferentially consumed, leaving the remainder of energy and carbon in increasingly recalcitrant forms [11]. While these are an integral part of productive systems, chemolithoautotrophs are also present in detrital systems though in quantities nowhere near large enough to sustain the primarily heterotrophic community. Because this system is more reliant on photochemical energy, detrital systems are classified as SLiME-like [9].

The counterpoint to a SLiME-like detrital system is termed a productive system. These ecosystems are completely independent of photosynthetic based energy and fixed carbon [9]. The ecosystem energetics of phototrophs is replaced by chemolithoautotrophic based chemical energy in the form of hydrogen gas [8]. A key point to productive systems is that both the original electron donor and ultimate electron acceptor will be derived from abiotic geochemical sources [11]. Oxygen cannot be used as an electron acceptor because it is a by-product of photosynthesis, which does not occur in the subsurface. Due to the complete independence from photosynthesis, productive systems would be considered to be true SLiMEs [9].

The reason the majority of subsurface chemolithoautotrophs use hydrogen as their energy source is due to its availability and energetic potential. Hydrogen is able to travel through water easily, with high concentrations present in aquifers [5], and possesses a strong reducing power [2]. There are many ways that hydrogen can be generated within the subsurface, including but not limited to: reactions between gaseous carbon dioxide, water and methane at high temperatures, reactions between dissolved carbon, hydrogen, oxygen and sulfur in magma, radiolysis of water from the decay of radioactive isotopes of elements such as uranium, thorium and potassium, decomposition of methane to hydrogen and carbon at temperatures above 600 degrees Celsius, ferrous mineral hydrolysis in mafic rocks (serpentinization), and in the presence of water, the cataclasis of silicates [7]; [8]; [9]. All of these processes ensure that there is a steady supply of hydrogen for chemolithoautotrophs to utilize. 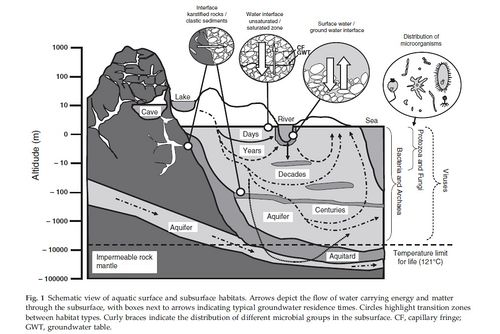 The subsurface is quite vast, allowing for a variety of locations for SLiMEs to occur. Groundwater ecosystems such as aquifers are very common SLiMEs. The complexity and size of groundwater ecosystems are quite variable, they can range from small alluvial aquifers to large regional aquifers hundreds of kilometers long [4]. The larger groundwater systems are usually part of cavernous karstic environments [11]. Deep marine hydrothermal vent subsurfaces are another well studied area when it comes to SLiMEs [1]; [10]. Related to the hydrothermal vents is the hydrothermal sediment biosphere. The difference between the two is that large sediment layers allow for a greater diversity of anaerobic and thermophilic microbial life [1].

The Lidy Hot Springs is a geothermal environment with access to hydrothermal zones 200 meters below the surface [3]. The contents of the water provides a clue towards the type of SLiMEs that could be present in the springs. The abundance of inorganic carbon and concentration of molecular hydrogen suggest that methanogenesis supports the microbial communities that exist in the spring [3].

Even though the subsurface is its own isolated world for the most part, there are reasons to focus on it and the impact SLiMEs have and could possibly have on the surface. These impacts include the effects of microbial activity in deep oil reservoirs, the use of SLiMEs to clean up contaminated groundwater systems, and proper disposal of radioactive wastes in deep rock formations. This requires intimate knowledge about the host rock environment, which includes the effects microbial activity might have on the rocks [10]. A current focus is on the massive reservoirs of methane located within the subsurface resulting from methanogenesis [7]. The attention is due to methane being a potential energy source, with the amount contained in the reservoirs estimated to be double that of the amount of energy contained in known oil gas reservoirs [10] and concern over the methane's role as a potent “greenhouse gas” [7].

[5]Haveman S. A. and Pedersen K. “Distribution and metabolic diversity of microorganisms in deep igneous rock aquifers of Finland.”Geomicrobiol. J. 16 (1999): 277–294.

[6]"INTRODUCTION TO THE SEDIMENTARY PROCESSES AND STRUCTURES OF THE TRENTON GROUP." Sedimentary Processes. 2004. Harvard College. <http://www.mcz.harvard.edu/Departments/InvertPaleo/Trenton/Intro/GeologyPage/Sedimentary%20Geology/sedprocessesstructures.htm>.