A Microbial Biorealm page on the genus Sulfolobus acidocaldarius 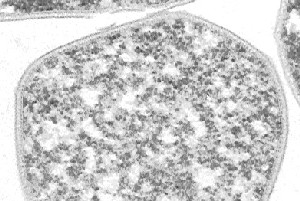 Sulfolobus acidocaldarius is an aerobic thermoacidophilic crenarchaeon which grows optimally at 80°C and pH 2 in terrestrial solfataric springs. [1] They are primarily an aquatic organism; highly abundant in sulfur-rich hot acid springs in Yellowstone National Park. Sulfolobus are likely to be present in most hot springs [6]. The strictly aerobic organism also establishes itself in hot acid soils at temperatures 55-85°C. [3] Sulfolobus acidocaldarius is responsible for the oxidation of sulfur in sulfuric acid production and the existence of sulfur-oxidizing bacteria. [3]

Sulfolobus acidocaldarius strain DSM639, the type strain of the archaeal genus Sulfolobus, was the first hyperthermoacidophile to be characterized from terrestrial solfataras. [1] They serve as a model organism for the Phylum Crenarchaeota and have been used for many studies in archaeal biology.

133 short genes were identified by comparing all DNA sequence analysis with the other Sulfolobus genomes [1]. The 133 shorter genes appeared in multiple copies, there is a total of 95 different genes [1]. Inteins were not found [1].

Sulfolobus acidocaldarius grows under strictly aerobic conditions on complex organic substrates, including yeast extract, tryptone, and Casamino Acids, a wide range of amino acids, and a limited number of sugars (carbon sources) [1]. Sulfolobus acidocaldarius has three unique enzymes that allow the organism to grow on carbon sources. These includes a homolog of the bacterial enzyme to degrade poly(3-hydroxyalkanotes), a special transporter for malate and other C4-dicarboxylates, and two subunits of an aromatic ring dioxygenase to degrade simple aromatic ring compounds [1].

As in the other two Sulfolobus genomes, Sulfolobus acidocaldarius is encoded to carry the enzyme for metabolizing sulfur which yields sulfuric acid from hydrogen sulfide via a conserved sulfur locus [1].

To occupy such an extreme environment efficiently, Sulfolobus acidocaldarius has unique features which allow them to live in hot and acidic springs. They are capable of direct removal of DNA damage, base excision repair, nucleotide excision repair, and homolog-dependent double-strand-break repair [1]. Sulfolobus acidocaldarius has a fairly short mRNA half-life distribution, similar to those of fast growing bacteria, which meets the need for rapidly reprogram gene expression upon sudden changes in the environment [4].

In addition, the organism carries an apparatus for ultraviolet damage excision repair in its genome, the UV damage endonuclease [1]. Furthermore, motility away from lethal hot spots is observed, even in the absence of carbon and energy source [2]. This temperature sensitive motility is an important survival mechanism unique for Sulfolobus acidocaldarius in the hydrothermal environment [2].

Sulfolobus acidocaldarius has facilitated archaeal cell cycle studies, not only with its very stable genome organization, but also its special ability to exchange chromosomal genes intercellularly and its capacity to grow synchronously in culture [1].

Sulfolobus acidocaldarius are abundant in Yellowstone Park’s sulfur-rich hot acid springs at temperature 70-80°C [1]. They occur in high numbers attaching to the surface of sulfur crystals [3]. Sulfolobus acidocaldarius oxidizes sulfur to sulfuric acid and they are responsible for the sulfuric acid concentration in the aquatic enviornment [3]. Such acidic conditions do not allow for organism interactions in nature.

When acidic springs are absent, solfatara soils and mud pots (due to the microbial oxidation of sulfuric acid) are heated by rising streams to various temperatures [3]. Solfatara soil is the home to Thiobacillus thiooxidans, as well as Sulfolobus acidocaldarius [3]. Both of these organisms are found in a pH range of 0.9-5.9, however, temperature plays the role in their separation. Sulfolobus acidocaldarius is found only at temperatures 55 °C and above, whereas Thiobacillus thiooxidans resides in soil below 55 °C. The thermoacidophile isolates itself in its optimal environments.

Sulfolobus acidocaldarius strain B12 is known to be a viral host [7].

Sulfolobus acidocaldarius is currently not known to cause any diseases.

Sulfolobus serves as a host to lysogenic viruses. The viruses infect Sulfolobus to survive in the extremely acidic environment. Sulfolobus acidocaldarius, strain B12, harbors a double-stranded DNA species both as a plasmid and in a linear form, and produces virus-like particles, SAV 1, upon Ultraviolet radiation [7]. The host cell recovers and remains lysogenic after the viral production; virus is thus released into nature [7]. Although viral particles are found attached to the cells, neither adsorption nor infection has been observed [7].

Extreme thermophiles have always been of great interest because of their thermostable abilities. Sulfolobus acidocaldarius has aided in the studies of chromatin-binding proteins, replication, cell cycle, repair, transcription, translation, as well as metabolism [5]. Moreover, its sensitivity to a wide range of ribosomal antibiotics and ease of transformation has rendered Sulfolobus acidocaldarius a focus for in vivo genetic studies [1]. It is the only hyperthermophilic archaeon with a spontaneous mutation rate quantified in vivo [1].

In 2007, a series of Sulfolobus-Escherichia coli shuttle vectors were successfully constructed. The newly developed multicopy, non-integrative, plasmid-based Sulfolobus–E. coli shuttle vectors are very stable in hosts which make them suitable for the use in protein expression and reporter gene studies [5]. The new vector system will facilitate the genetic studies of Sulfolobus, as well as other biotechnological uses, including overexpression and optimization of thermophilic enzymes that are not readily performed in mesophilic hosts [5].

In 2005, polar lipid fractiond (PLFE) were isolated from Sulfolobus acidocaldarius to be analyzed with differential scanning calorimetry (DSC) and pressure perturbation calorimetry (PPC) for membrane packing and phase behaviors studies [8]. The thermoacidophilic archaeon PLFE lipids were observed and plotted under different temperatures and pH. Together, DSC and PPC reported the temperature-induced phase transitions, the associated ΔH and ΔV/V values, and the temperature dependence in PLFE liposomes [8]. The results showed that free volume and volume changes are the governing factors in membrane properties, such as solute partitioning and lateral diffusion [8]. The physical characterization of Sulfolobus acidocaldarius PLFE lipids expands the understanding of how plasma membrane of thermoacidophiles sustains in harsh environments, holds the potential to improve the crystallization of membrane-bound proteins, and aids the delivery of drugs and vaccines [8].

In 2001, a published work on Sulfolobus acidocaldarius was followed. Previously in 1989, glycogen-bound polyphosphate kinase was reportedly isolated from a crude extract of Sulfolobus acidocaldarius by isopycnic centrifugation in CsCl [10]. They reported polyphosphate kinase (PPK) activities could not be reproduced in 2001. PPK was not found to associate to any of the proteins bound to the glycogen-protein complex [9]. Further studies led to the cloning and characterization of the corresponding gene and the results showed glycosyl transferase (GT) activities [9]. The glycogen-protein complex of Sulfolobus acidocaldarius does not contain a PPK activity, what was previously reported as being glycogen-bound. PPK is actually a bacterial enzyme-like thermostable glycogen synthase [9].