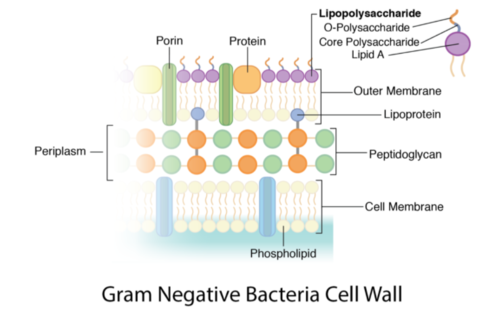 Peptidoglycan is a polymer made of sugars and amino acids that forms a layer outside the plasma membrane of bacterial cells. Peptidoglycans are cross-linked by peptides, serving as the cell wall that protects bacteria from the environment. Peptidoglycan limits the volume of the cell and thus it generates turgor pressure as the water rushes into the cell. Gram-positive bacteria obtain a thicker peptidoglycan layer than Gram-negative bacteria but this layer is crucial to the survival of both types of bacteria. Many antibiotics target this component to kill the bacteria. For example, penicillin binds to penicillin-binding proteins and inhibits the synthesis of peptidoglycan, weakening the cell wall of bacteria. It has been discovered that a new mechanism could be used by antibiotics on peptidoglycan— blocking the action of autolysins, a peptidoglycan hydrolase that is essential for remodeling the bacterial cell wall during growth. Studying how this new mechanism works could give us insight into developing new antibiotics against resistance strains.
Sample citations: [1] [2]