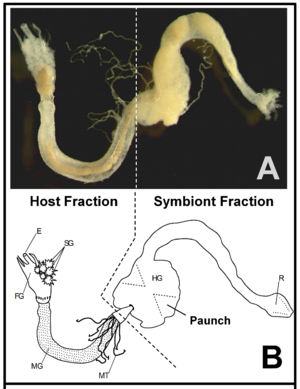 Figure 1. Collaboration of the host and the symbionts in lignocellulose digestion demonstrated by image of R. flavipes (A) and drawing (B) provided by Scharf et al. (11) In part B, the different components of the digestive tract are labeled: esophagus (E), salivary glands (SG), foregut (FG), midgut (MG), Malpighian tubules (MT), and hindgut (HG). 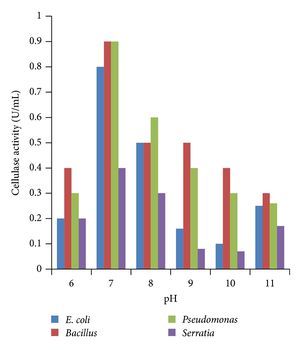 Figure 2. The effect of a higher pH or alkalinity on the amount of cellulase activity from Sethi et. al’s study on optimizing cellulase production from these four bacteria isolated from soil. Their results described maximum enzyme activity correlated with a pH between 9.0 and 11.0 (12).

Termites degrade lignocellulose with the combination of their own “mechanical and enzymatic contributions” and the catalytic contribution of their symbiotic microbes. (8) Many studies on termite gut cellulose digestion have been conducted using carboxymethyl-cellulose as the substrate to measure cellulase activity in termites, but carboxymethyl-cellulose can be hydrolyzed in ways that aren’t specific to digestion in the gut, such as activity in salivary glands. Therefore, Tokuda et. al looked at the digestion of crystalline cellulose in termites and compared the different types of cellulase activity. (4) Their investigation found that most cellulose digestion occurs in the hindgut for termites that have flagellates, and the midgut for termites without the presence of flagellates in their gut. They also describe evidence of hingdgut bacteria containing 'cellulosome' complexes, explaining how they digest the food substrates with their cell wall by surrounding the food substrates. (4)

Lignocellulose digestion requires efficient cellulases and glycoside hydrolases to degrade the the cellulose and hemicellulose of the cell wall, but additionally a mechanism to handle the lignin barrier. This is accomplished through the combined effort of the host termite and its symbionts. (8) Both higher and lower termites have the enzymes needed for the first stage of the TCA cycle, but they lack an enzyme capable to convert pyruvate to acetyl CoA or acetate. (3) Hydrolysis of cellulose begins with endoglucanases released by the host: in lower termites the endoglucanases are secreted by the salivary glands, while they are secreted in the midgut epithelium in higher termites. (8) The flagellates in lower termites produce numerous exoglucanases, exoglucanases, B-glucosidases, and numerous other glycoside hydrolases. In higher termites, there are also many cellulases, xylanases and other glycoside hydrolases. Burnum et al. used metaproteomics to examine the hindgut of Nasutitermes corniger, a higher termite, and found almost a quarter of the 886 proteins they identified were enzymes and 36 were glycoside hydrolases. (7) Their results suggest these enzymes were important to the symbiotic relationship between the hindgut microbes and the termite host. He et al. studied Nasutitermes corniger as well as Amitermes wheeleri with the comparison of metaproteomic and metatranscriptomic analysis. (Fig 3.) Both N. corniger and A. wheeleri are higher termites, but they have different diets and habitats. (9) He et al. found different abundances of certain bacteria in the guts of the two termites, catering to their varied diets - cow dung for A. wheeleri and wood for N. corniger. In both, however, many glycoside hydrolases were found (similar to the observations of Burnum et al.) to assist in cellulose degradation. He et al. notes that there were no lignin degradation genes identified in either species’ hindguts. (9)