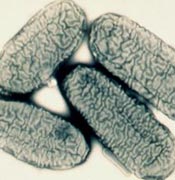 Not much information has been gathered on the genome structure of Synergistes jonesii, aside from what can be deduced from observed metabolic processes. The genome of S. jonesii is comprised of a 58% GC content.