Melanoma, one of the most dangerous forms of skin cancer, can occur when skin cells are exposed to UV radiation from the sun without protection [1]. When skin cells are frequently exposed to UV radiation, pigment producing cells called melanocytes can accumulate mutations within their DNA, and sometimes these mutations can cause them to turn cancerous [1]. Cancerous cells divide unchecked by normal cell signaling and multiply into tumors on the skin [1]. Melanoma can occur anywhere on the human epidermis including the head, neck, hips, back, and even the eye [2]. The reason melanoma is considered to be dangerous is that it frequently becomes metastatic, which means that it spreads to areas around the human body different from where it originated, and when cancer spreads it becomes extremely difficult to treat [2]. One of the most common ways to see if someone has melanoma is to check their body for moles. The moles are often discolored, change in size and shape over time, and are asymmetrical [2]. Melanoma can be staged in 5 different categories, 0-IV, with the earlier stages being the easiest to treat while the later stages are the most difficult to treat especially if the cancer has spread throughout the human body. In general, there are five different way of treating melanoma. The five most common techniques used are chemotherapy, surgery, immunotherapy, radiation therapy, and targeted therapy [2]. All of these treatments have positives and negatives associated with them, but this page will focus on one novel microbial based treatment for melanoma that falls within the immunotherapy category. One of the reasons to choose immunotherapy over other forms of treatment is that a variety of cancers can be treated because the immune system is being improved through the treatment [3]. Treatments such as radiation and chemotherapy are relatively ineffective against melanoma making immunotherapy one of the only viable options for patients with this illness [3]. Another benefit to immunotherapy is that its treatments have been shown to last longer in comparison to other therapies because the immune system is trained to recognize what cancer cells look like to eliminate them and inhibit tumor growth [3]. Immunotherapy is a more precise way to treat cancer than other common therapies such as chemo and radiation therapy which use radiation and toxic drugs that can be effective during treatment but cause extensive damage to normal human cells [3]. One of the most recent breakthroughs in immunotherapy was the development of the first Oncolytic virus called Talimogene Laherparepvec (T-VEC). 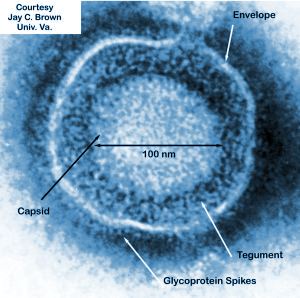 Figure 1: Transmission Electron Micrograph of a Herpes Simple Virus Particle by Jay C. Brown of the University of Virginia. [http://darwin.bio.uci.edu/~faculty/wagner/hsv2f.html. 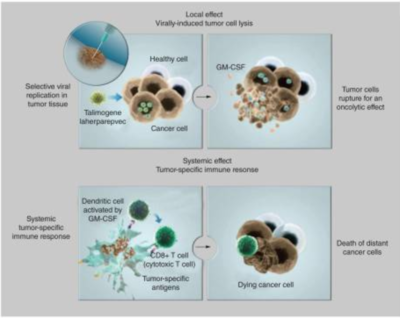 Figure 2: Image of the local and systemic effects of T-VEC. The local impact of T-VEC includes replication within cancer cells and release of virus particles upon cell lysis. The systemic impact of T-VEC includes the release of tumor specific antigens and the activation of Dendritic cells by GM-CSF. [9][https://www.ncbi.nlm.nih.gov/pmc/articles/PMC4519012/pdf/nihms709872.pdf 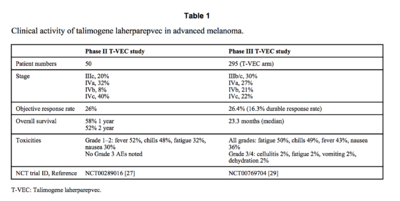 Figure 3: Image of the results from the Phase II and III T-VEC studies. The results shown include the number of patients, the stage of their melanoma, the objective response rates and overall survival. The objective response rates are a measure of the amount of patients who experienced a predetermined tumor size reduction. The durable response rates are a measurement of the length of patients response rates. Stage IIIc melanoma cannot be removed by surgery but remains localized to the original tumor. Stage IVa melanoma has begun to spread away from the original tumor, and stages IVb/c have spread to areas like the nervous and respiratory systems. [9] [https://www.ncbi.nlm.nih.gov/pmc/articles/PMC4519012/pdf/nihms709872.pdf

Development and mechanism of Talimogene Laherparepvec

BioVex Inc., the inventors of T-VEC, were purchased by the company Amgen in 2011 for around $1-billion dollars to develop their breakthrough treatment for melanoma [4]. The BioVex group created T-VEC by genetically engineering human herpes virus 1 (HSV-1) to decrease its pathogenicity for healthy human cells while increasing the viruses ability to attack and kill tumor cells (Figure 1) [4]. The strain of HSV-1 used as a starting block for T-VEC was JS1 which exhibited a greater ability to kill cancer cells in comparison to other natural and engineered strains of herpes virus (Figure 1)[5]. The JS1 strain of HSV-1 was genetically engineered by having its copies of the genes containing neurovirulence factors ICP34.5 and ICP47 deleted (Figure 1)[5]. Neurovirulence factors give HSV-1the ability to cause disease in the human nervous system and the removal of those genes improves the safety of the virus. The removal of ICP34.5 specifically lowered the strains neurotoxicity while the removal of ICP47 is associated with an increase of the viruses ability to replicate with in cancer cells, killing them in the process [5]. The deletion of ICP47 is also associated with the upregulation of the gene US11 which increases the viruses ability to replicate within tumors and lyse them [6]. Finally, the gene for granulocyte macrophage colony-stimulating factor (GM-CSF) was inserted to replace the two deleted neurovirulence factors to help increase immune response through the promotion of dendritic cells [6]. Dendritic cells are a part of the adaptive immune system and help signal immune responses by creating antigens that will signal the presence of cancerous cells to the human body. GM-CSF increases the ability of T-VEC to treat distal tumors not directly injected with the virus [7]. The increased expression of US11 helps increase the tumor specific replication of viruses [7]. None of the alterations done by the BioVex group made T-VEC resistant to common antiviral drugs available such as acylclovir, which can be used to treat HSV-1 [5]. This gives doctors the ability to treat for a viral infection if something were to go wrong with T-VEC in a patient. The mechanism of T-VEC is to selectively replicate within tumor cells and lyse them (Figure 2)[4]. Once the virus lyses a tumor cell many viral particles and tumor antigens will be released into the surrounding tumor and inducing a strong immune response against the tumor by signaling to the adaptive immune system which can fight cancerous cells (Figure 2)[5]. As the virus directly kills and lyses cancer cells, it spreads itself even further into the tumor by releasing copies of its self-made within the cancer cells, increasing its own effectiveness [5]. The reason viruses can selectively enter cancerous cells is because they have mutated so much that they have lost their antiviral defense mechanisms [4].


Phase I and II testing of T-VEC

Before T-VEC was able to move on to more important testing its developers needed to assess the safety of the drug and see how effective it was at treating melanoma in live patients [7]. Overall, thirty patients took part in the first clinical trial of the drug and 13 of the patients were given a single dose of the drug while 17 patients got a multidose treatment of the drug [7]. The purpose of the multidose treatment was to see the impact of converting patients who had no trace of HSV-1 in their blood (seronegative) before receiving T-VEC. The multidose treatments started at a low concentration of T-VEC to avoid any serious side effects and the ensuing treatments went up in concentration allowing the seronegative patients to adapt to the virus [7]. In the single and multidose groups, the side effects seen most frequently were fever, nausea, vomiting, fatigue, and anorexia [7]. A common side effect seen in seronegative patients was a combination of inflammation and lumpy patches at the site of injection[7]. The process of starting the seronegative patients on a low dose of T-VEC and raising the concentration in subsequent treatments effectively allowed the patients to adapt to the new virus they had been exposed to, and the inflammation side effect went away in later treatments [7]. Other than inflammation and patchy skin the seronegative patients didn't experience any major side effects. None of the side effects seen in this study were considered to be intolerable by the patients thus allowing T-VEC to be considered safe enough for further testing. The potency of the virus against tumors was also of interest to the researchers. The virus was found to be active against the tumors with evidence of replication, expression of GM-CSF, antigen-associated tumor necrosis, and tumor flattening [7]. All of these were the expected results of using T-VEC to treat melanoma. The impact of T-VEC against melanoma resulted in many of the tumors being shrunk in size and the progression of the disease in many patients was significantly slowed[7]. There was no significant difference in the ability of T-VEC to treat seronegative patients versus patients who already had been exposed to HSV-1 before treatment began [7]. Other than overall safety and activity of the drug researchers used this initial testing of T-VEC to find out how often the drug should be given to patients [7]. It was discovered that patients should be given T-VEC every 2 to 3 weeks for optimal treatment effect [7]. This gave a treatment schedule that was used in later testing of T-VEC and can be used in any future research involving the virus [7]. In general, the viral treatment was shown to be safe and effective enough to treat various types of tumors and the promising results of the phase I testing of T-VEC merited phase II trials [7].

The goal of phase II testing was to see how effective T-VEC is in treating stage III melanoma that cannot not be removed by surgery and stage IV melanoma which has spread throughout the human body [2][8]. Both of these late stage melanomas are typically associated with low survival rates, with patients having a ~25% chance to survive for one year [8][9]. To see how effective T-VEC is at treating late stage melanoma, tumor size reduction was recorded and referred to as response rate and the survival rates of patients were recorded as well [8]. Overall, fifty patients took part in the study, 10 of which had stage III melanoma and the other 40 had various stage IV melanomas [8]. Seronegative patients were given a small initial dosage of T-VEC to adapt to the virus and then the concentration of the drug was increased in subsequent treatments [8]. Similar to the phase I study, no differences were seen in T-VECs ability to treat sernogative patients versus patients who had been exposed to HSV-1 before they began treatment. Tumors in eight of the patients were completely destroyed by the treatment of T-VEC and five of the patients had large portions of their tumors significantly reduced in size (Figure 3)[8]. T-VEC was not only effective in treating injected tumors but also at treating distant tumors that were not directly injected with the virus [8]. Reduction in the size of distant tumors highlights the ability of the T-VEC to stimulate an immune response against melanoma [8]. The duration of the treatment effect lasted on average for about half a year to just over two years for some patients [8]. This is important to note because part of the benefit of immunotherapy is a long lasting treatment. Patients with tumors that had a positive response to the T-VEC treatment were about twice as likely to survive a year than those who took part in other stage II clinical trials treating melanoma (Figure 3)[8]. The success of T-VEC in the phase II study combined with the proven safety profile of the drug from its phase I study evoked phase III testing of T-VEC.