About magnification claims on photomicrographs…

I made a correction to this page, regarding the claimed magnification of the image.  Before I edited it, the caption claimed that it was a 1000× magnification, while the original source of the image claims 100,000 ×.

It occurs to me, however, that such a claim is really rather meaningless on digital images, displayed in this manner.  You cannot know how the screen is configured on any given system used to view this page, nor how large the image will appear on that screen.  For it to be meaningful to describe an image as n× magnification, you would need to know that the image is displayed on the reader's screen at such a size that the objects depicted therein are really shown, on that screen, n times actual size.

Reading this article on my own computer, the scale of this image is such that the diameter of the virion, as displayed on my screen, appears as about three or four millimeters; let's call it 3½ millimeters.  According to the article, the diameter of these virions is about 80 nanometers.  So as this image is displayed on my screen, the magnification is actually about 43,750×.  Someone else using a different computer, with a different display, configured differently, would see this same image at a different size, and hence a different magnification.

If I go to the PHIL source of the original image, follow the links to the super-duper high-resolution version (which is 2984 × 2022 pixels), and display a portion of that at full pixel-per-pixel resolution, the same virion now has a diameter, as displayed on my screen, of about three centimeters, giving me an effective magnification of 375,000×.  Again, someone else viewing this same image on a different computer, with a different screen, and different settings, would get a different magnification.

For this reason, I don't include such claims of an absolute magnification factor in any of my own photomicrographs.  Instead, I try to include information that allows the viewer to determine the scale of the objects shown therein, regardless of the size at which the image is rendered.  To give a couple of examples… 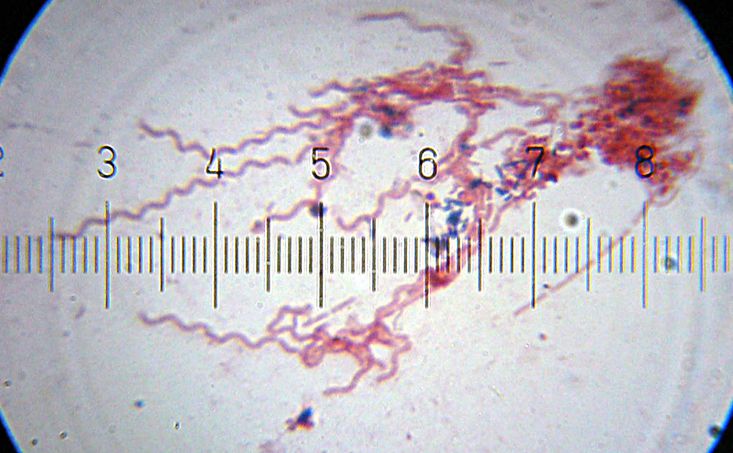 My 15× eyepiece includes this numbered scale.  The actual meaning of this scale depends on which objective I use with it.  In this case, I used a 100× oil-immersion objective, and when this eyepiece and this objective are used together, the numbered ticks on the scale represent intervals of 11 µM.  Now, you can tell, from the fact that I used the 100× objective and 15× eyepiece, that my microscope was configured to give a magnification of 1500× but that is rather far removed from the actual magnification of this image as it is displayed right now on your screen.  As currently displayed on my screen, the numbered ticks appear about 2.75 centimeters, or 27,500 µM apart, while the distance they represent with regard to the objects in the image is 11 µM, giving a magnification of 2500×.  The size at which this image is rendered on your screen, and thus the magnification, is probably different.  But you can know that the numbered ticks in the scale that appears in this image are eleven microns apart, and from there, you can derive the measurements of the objects depicted herein. 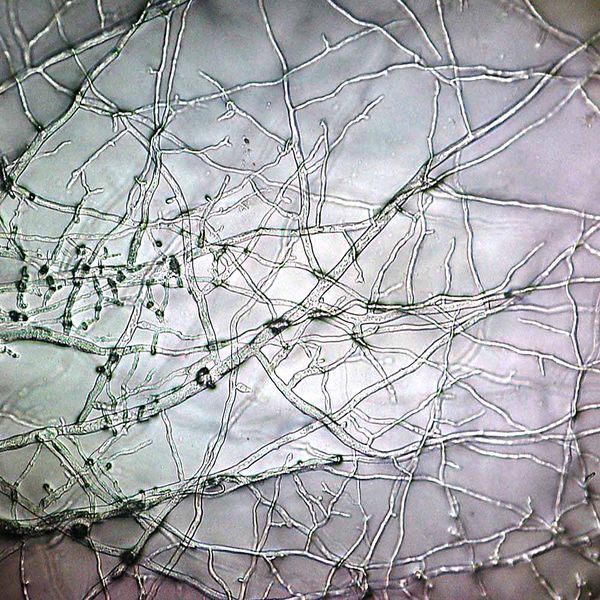 Here, I used my 10× eyepiece, which doesn't have that nifty scale built into it.  I used this together with my 10×, objective, so my microscope was set up for a magnification of 100×.  But , again, this doesn't really have much to do with the magnification of this image as you're seeing it.  This particular image covers a one-millimeter square.  I've taken the trouble to perform various calibrations and measurements between my microscope, my camera, and every combination of every objective I have with every eyepiece, so that I can know, of this image, that the area that I cropped out of the original to form this square is a millimeter on each side.  From there, you can derive the measurements of those objects depicted herein.  As this image is currently being displayed on my screen, it is as a 15-centimeter or 150-millimeter square, so the magnification as this image is displayed here on my screen is 150×.  On your screen, it is probably displayed with a different size, and thus a different magnification.

As far as the image being used in this article, by making some measurements on it, and assuming that the virii depicted therein all have a diameter of 80 nanometers, I can extrapolate that the image, as a whole, covers an area approximately 2125 by 1458 nanometers.  To describe the scale in this manner is equally accurate, regardless of how large the image is actually rendered on anyone's screen.