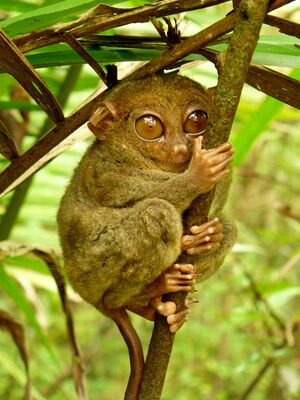 Tarsiers inhabit many forested regions of Southeast Asia. Their locomotive style, vertical clinging and leaping, helps them navigate quickly through trees and vines. The tarsier in this image is clinging to a tree, taking advantage of its padded digits to aid in gripping. Image courtesy of Kok Leng Yeo at the Tarsier Sanctuary, Corella, Bohol via Wikimedia Commons, by 2.0 license. [1]

Tarsiers are small, elusive primates that are native to Southeast Asia and the Philippines. The animals of the genus Tarsius are known for their extremely large ears and eyes, their carnivorous diet, and their long tarsal bones (the source of their name)[1]. The number of Tarsier species is unclear, but a range of 6-13 have been reported. At most, a tarsier could weigh 130g[2] , while a pygmy tarsier might weigh as little as 57g. They are vertical clingers and leapers; their tails and padded digits aid them in this locomotive style[3]. Their notable eyes are massive, outweighing their brains and lacking a tapetum lucidum[4], or "eyeshine." This keeps their location hidden, since there is no eye reflection to betray their position to predators. Their strange eyes also lack movement, but their owl-like necks are capable of 180 degrees of rotation to accommodate this[1] . Tarsiers are nocturnal, and many of their physical adaptations support their sleep habits; mostly their incredible hearing. Their vision isn’t perfectly adapted to being nocturnal, since they have a fovea[5] rather than the aforementioned tapetum lucidum. The phylogenetic placement of the genus Tarsius is widely debated, and many researchers have undertaken genetic experiments to identify their position in relation to other primates. 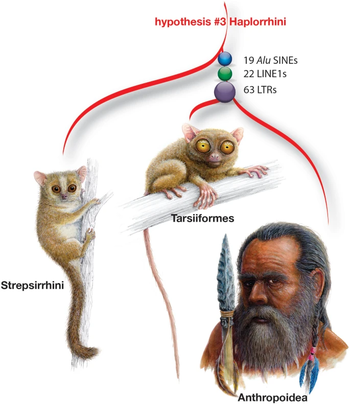 Many studies have found that the most genetically accurate phylogenetic placement of the tarsier is as a sister group to anthropoids in the clade Haplorhinni. This figure illustrates that hypothesis, although there is still significant conflict in the scientific community about the taxonomy of tarsiers.[6]

Phylogeny
Tarsiers have traditionally been considered prosimians. Prosimians, members of the suborder Prosimii, have rhinariums (wet, snout-like noses with vertical nostril slits), claws, and tails. Generally, their physical characteristics are geared towards a nocturnal life; their eyes have tapetum lucidum and they have a very developed sense of smell [7]. Tarsiers, however, lack claws, a tapetum lucidum, and a rhinarium. This lack of shared traits has led taxonomists to doubt the relationship between tarsiers and prosimians, leading some to suggest that tarsiers should be grouped with the suborder haplorhini (prosimians are members of the suborder strepsirrhini[8]). The great phylogeny debate led to many genetic studies of the tarsier. For example, the Alu repeats of the tarsier genome were studied and found to indicate that tarsiers form a sister clade with haplorhines rather than with other prosimians [9]. This new phylogeny is based on derived traits, particularly regarding the anatomy of the postorbital region. Strepsirrhines have a postorbital bar, while haplorhines have a postorbital septum[10] - Tarsiers are again grouped with the haplorhines based on this trait. The phylogenetic debate boils down to prioritizing traditional, Linnaean taxonomy or focusing on more contemporary ideas of cladistics. While many genetic studies have attempted to resolve the taxonomic debate, the lingering uncertainty makes it hard to study the effects of habitat destruction on tarsiers or label their conservation status. [11]

Behavioral and Physical Adaptations
Tarsiers have multiple fascinating adaptations that enhance their fitness. Their extremely long tarsal bones, which give them their name, allow them to be efficient vertical clingers and leapers. Many different physical adaptations support this mode of locomotion, and can be traced back to ancestral tarsier species[12]. Their massive eyes, lacking a tapetum lucidum, aid in their night vision; a helpful adaptation to support their nocturnal lifestyle[13] . Instead, they have a fovea, which could be an indication that their ancestors were diurnal[5] . Their large and mobile ears support an incredible range of hearing, equipping them for hunting at night. Some species of tarsier can hear above 90 kHz, an adaptation that enhances their nocturnal lifestyle. Tarsiers are fairly unique in their diet; they are solely carnivorous and eat small terrestrial vertebrates as well as insects[2]. 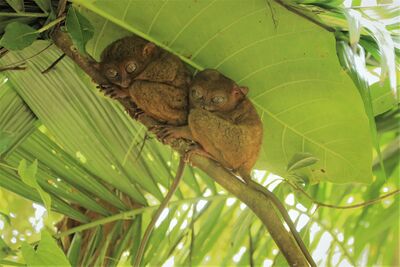 Although they were long thought to be solitary primates, tarsiers have recently been observed demonstrating monogamy or polygyny. Image courtesy of Øyvind Holmstad in Bohol, Phillipines via Wikimedia Commons by a 4.0 License. [2]

Tarsiers were originally thought to be almost exclusively solitary animals, but recent observations of their social behaviors have adjusted that view. Despite the challenges imposed by the tariser’s small size, lack of eyeshine, fast movement, and nocturnal nature, researchers have been able to observe them and draw new conclusions about their social lives. Using radio telemetry, it is now understood that tarsiers live in monogamous pairs and are quite territorial. Males seek to protect territory with good sleeping trees - those with the best trees often find themselves with multiple mates, so tarsiers are not exclusively monogamous[1].

Genetic Basis of Tarsier Speciation, Evolution
The process that led to tarsier speciation through history was complex, as are all speciation processes / events. With increased study into the tarsier genome, we are able to better understand the distinctifying genetic characteristics of tarsiers. One of these lies in the PRDM9 gene. Evolutionary events regarding this gene may have been driving forces of speciation[14] . Indel mutations of the PRDM9 gene often cause hybrid sterility due to incompatible alleles, so the tarsiers’ altered gene would have isolated them as a species [14].

Tarsier evolution is of great interest to researchers, since it can enlighten many other aspects of primate evolution. Recent studies of L/M opsin genes in tarsiers have shown ancestral long-to-medium opsin polymorphism, suggesting that anthropoid visual evolution occurred in dim-light environments. This discovery also challenges the long-held nocturnal-diurnal dichotomy that has long been the basis of evolutionary thought as it pertains to anthropoids[5] . Studies like these show how crucial tarsiers can be to studies of primate evolution - their genome can teach us significant lessons about the origins of their fellow primates. 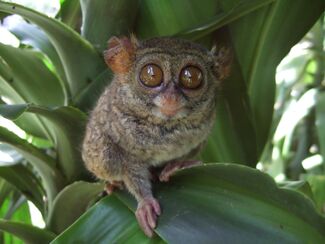 The physical adaptations of the tariser include their large eyes, mobile ears, and padded digits. These traits support the tarsier's locomotion, food acquisition, communication, and aid them in succeeding as nocturnal animals. Image courtesy of Sakurai Midori at the Grand Naemundung Mini Zoo, Tandurusa, Bitung, North Sulawesi via Wikimedia Commons, by 3.0 license. [3]

Contributions to the Study of Microbes

Just like any living organism, tarsiers interact with microbes in many ways. Perhaps most obviously, their gut microbiome supports digestion and health in many ways; a trait they share with the vast majority of animals. Symbiotic relationships between primates and their gut microbes help them break down their food and obtain the energy they need from the compounds they digest[15] . Beyond that, however, tarsiers have been useful in microbial studies. The tarsier genome proved useful when researchers compared it to the human genome in order to study human cytosolic microbial sensors[16], an important aspect of immune function that helps identify when to mount an immune response. Orthologous genes in tarsiers were identified to help isolate the genes responsible for cytosolic microbial sensors in humans - evidently, the genes that help tarsiers mount an immune response are orthologous to corresponding genes in humans. Tarsier immune systems, therefore, are able to identify microbes and mount a specific response to them in a similar way to humans. The tarsier genome has also been used to study viral mechanisms[17] . The endogenous herpesvirus is notoriously difficult to study, but researchers were able to look at it within the tarsier genome and discover its defective viral mechanisms. Evidently, tarsiers interact with microbes in many ways; they rely on them for digestion, offer researchers information about them that can be applied elsewhere, and also fall victim to the negative impacts of viruses, parasites, and other pathogenic microbes just like any living organism.

Tarsiers are elusive, strange, yet alluring little primates that have long been the topic of discussion in many different scientific communities. They are fascinating from any angle: they pose a great phylogenetic challenge, their behavior is enigmatic and difficult to study, and their anatomy is undeniably strange. They have evolved uniquely to thrive in their environment and play a crucial role in the ecosystem. Their physical and behavioral adaptations, including their giant eyeballs, remarkable hearing, impressive leaping skills, monogamous lifestyle, carnivorous diet, and nocturnal sleeping habits have allowed them to occupy their niche - they have done so successfully for up to 55 million years[18] . Despite these adaptations, they are not perfectly adapted (no organism is!). For example, their lack of eyeshine inhibits their visual capabilities; although their fovea is useful and gives them good vision, it could be far better if they had a tapetum lucidum like many of their nocturnal counterparts. Tarsier evolution has long fascinated researchers, as it can give us a window into primate evolution as a whole. Studies of the tarsier genome have, and will probably continue to contribute to our understanding of human health. Despite their evasiveness, tarsiers have proven to be fascinating and useful in many ways.