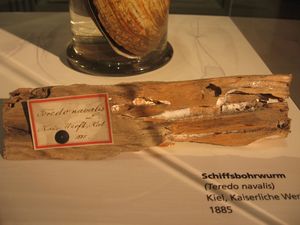 Wood found at the bottom of an ocean eaten by shipworms Courtesy of Dr. Grace Lim-Fong. Picture taken at the Zoological Museum of Keil

Characteristics of the symbiont

Teredinibacter turnerae is a gamma-proteobacterium, and is a gram-negative rod with a single polar flagellum used for mobility. This organism is primarily marine, although certain variants have been found to live in fresh water streams. T. turnerae optimally grows at 30-35 degrees Celsius, pH 8-8.5, .3M NaCl, and in elevated concentrations of Ca2+/Mg2+, which reflects its primary existence in sea water. [2] The genome of T. turnerae has been completely sequenced, containing 5,192,641 base pairs with over 100 genes implicated in the digestion of plant polysaccharides. [2] It is closely related to Saccharophagus degradans, another bacterium that is capable of digesting cellulose. Unlike S. degradans, which digests primarily aquatic polysaccharides, T. turnerae encodes genes that are primarily specialized in the degradation of terrestrial polysaccharides. [4] T. turnerae is culturable, and furthermore exhibits antibiotic production, making it a potentially medically important microbe. [6]

The host of T. turnerae, Lyrodus pedicellatus or more commonly known as "shipworms" as they digest wood immersed in salt water, are small salt water clams with small shells. Even though L. pedicellatus resemble worms, they are not actually worms, but mollusks. There are roughly 300 species of Teredindiae, the shipworm family, which all have an organ known as the Deshayes gland. The Deshayes gland is a special organ located in the gills where the digestion of cellulose occurs, which is made possible by symbiotic T. turnerae.[6] 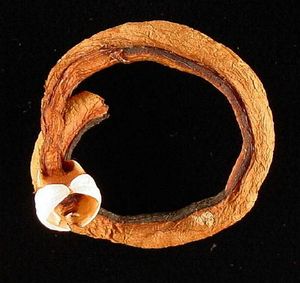 The symbiosis between T. turnerae and L. pedicellatus is considered to be a mutualism because there is no direct evidence supporting that T. turnerae benefits from the relationship.

Recently there have been studies focusing on the important enzyme produced by T. turnerae and used by L. pedicellatus to digest cellulose. CelAB (cellulase), is the enzyme produced by shipworms to break down cellulose, and is found to operate at an optimum pH of 6 and temperature of 42 degrees Celsius.[6][7] This enzyme has been shown to directly bind cellulose and chitin, and can degrade multiple polysaccharides. This enzyme has come to light in recent years due to the interest in industrial cellulases, which would be used to break down cellulose, the primary constituent of all plant matter, into sugars that can then be used to produce the biofuel ethanol. [7] 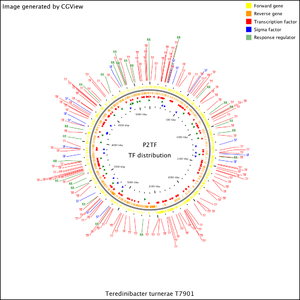 Approximately 7% of T. turneraes genome has secondary metabolite pathways that produce antibiotics in a density similar to Streptomyces (the main producers of antibiotics available today) which could lead to a benefit in medical research to kill pathogens in humans.[4]

More evidence is starting to prove that there is more than one type of symbiont community that is harbored in the Deshayes of L. pedicellatus. Focusing on diversity as a factor, research has determined that there are four different types of communities of symbionts found in L. pedicellatus. This could mean that the four ribotypes rely on each other to help the shipworm digest woody polysaccharides. Each ribotype is postulated to have at least one crucial gene for this metabolism, and when all ribotypes are functioning digestion of wood can occur.[4]

One reason why there are more than one ribotype is because there may be multiple symbiosis such as bacterium-bacterium and bacterium-host. This means the bacteria rely on each other to produce molecules and enzymes that benefit the community, and association of the bacteria with the hosts is beneficial for the host as well, respectively. The bacterium-bacterium symbiosis may help promote growth of bacterium communities suggesting that there maybe a true symbiosis between the host and the bacterium, as all ribotypes can be congregated in close proximity to each other inside the Deshayes gland.[3]