All primary HIV antibody epitopes are found on the heterotrimer HIV envelope spike (Figure 1). The heterotrimer spike is comprised of gp41, a protein partially embedded in the HIV membrane that binds other envelope proteins, and gp120, the protein responsible for binding CCR5, CD4, or CXCR4. A complex glycan layer surrounds gp41 and gp120 to comprise much of the outer layer of the HIV spike. The range of epitopes is greatly varied. Antibodies have been found to target specific segments of the gp41 protein and the gp120 protein in both glycan shield dependent and independent manners and have been shown to depend on the quaternary structure of the spike in some instances while showing structure independent binding in other cases.

The glycan shield surrounding gp120 and gp41 on the HIV spike plays a vital role in determining many antibody epitopes. N-linked glycans determine almost half of the mass of the HIV spike. However, very few glycan dependent or glycan specific neutralizing antibodies have been isolated and epitopes appear to be centralized on the gp120 protein and to a lesser extent at the base of the gp41 protein. Despite the fact that antibodies have not been shown to bind to the glycan shield directly, the shield can still affect antibody binding through steric hindrance. Since the glycan shield covers over half of the entire spike, it governs the how accessible specific potential epitopes are to neutralizing antibodies. 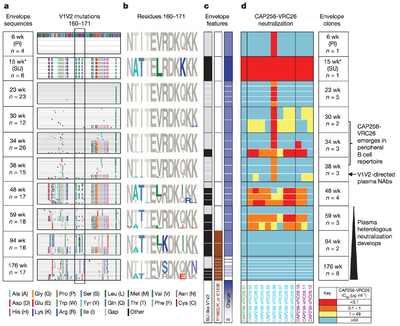