The canine parvovirus strain 2 (CPV-2), or “Parvo,” is a single-stranded DNA virus, non-enveloped, that leads to a deadly enteric infection in canines. Reported globally, this virus has been sighted in New Zealand, Australia, Asia, Europe, North America, and the Caribbean and continues to kill thousands of dogs each year [1]. The first sighting of the virus surfaced during the late 1970s in Europe. The disease led to an epidemic that lasted from 1978-1979 until a vaccine was formed and the outbreak subsided. When the virus was found through electron microscopy, scientists named it CPV-2 as it held close relation to CPV-1 — a viral disease that is now placed in an entirely different category. Canine parvovirus, group II, belongs to the Parvovirus genus and the Parvoviridae family. Its higher classification is the Protoparvovirus [2].

The virulent disease may cause gastroenteritis (hemorrhagic enteritis), myocarditis, and lymphopenia in canines, among several other diseases systemically [3]. Three structural proteins, VP1, VP2, and VP3, along with NS1 and NS2, two non-structural proteins, assemble the parvovirus. The proteins come together to form an icosahedral virus, meaning that the virus contains identical subunits to form a symmetrical, equilateral triangle [1]. VP2 protein is a main structural component of CPV-2 and maintains an eight-stranded, antiparallel β-barrel. The remainder of the VP2 protein is composed of loops that attach to the β-barrel [1]. This strain originated from Feline Panleukopenia (FPLV), also known as “Feline Distemper,” a contagious and fatal disease prevalent in felines [4]. FPLV, similarly to CPV-2, is known for attacking and dividing in rapidly dividing cells [4]. FPLV is not as common due to the widespread use of the vaccine [5]. Emerging from two or more mutations of FPLV, CPV-2 mutated so that the virus could infect canine hosts.

Studying the effects of canine parvovirus aids in the further development of vaccines and other forms of prevention against this pathogenic disease. Understanding the evolution and developments of this disease initiates the protection and safety of all individuals, as it may prevent future outbreaks. Canine parvovirus is a deadly disease that requires aggressive treatment if contracted, and thus deserves the attentive research and study to keep animals and humans safe. Although it has not been noted to develop in humans, variants of this disease may one day reach the potential to do so, making the study and maintenance of CPV essential. Not only does studying the disease raise awareness, but it also improves past health concerns and keeps canine populations safe from exposure.

Its mortality rate is higher in puppies (91%), ranging from six to twenty weeks old, than adult dogs (10%), as well as dogs who have not been vaccinated with the Distemper-Parvo vaccine, otherwise known as DA2PV (2). Puppies who come into contact with the CPV-2 are at a high risk for heart failure and myocarditis. Other mammals are susceptible to CPV, such as raccoons, coyotes and wolves. The virus can resist disinfectants as well as pH and temperature, making this highly contagious virus easy to transmit (3). Furthermore, the virus can thrive indoors and outdoor, though has more difficulty in outdoor environments (3). CPV-2 is also most prevalent in dog and animal shelters, and can be found in fecal matter as well on other surfaces such as water bowls and dog collars (5).

The acute symptoms of CPV-2 develop within 3 to 7 days and, being highly contagious, can spread to other dogs in close vicinities. Entering the canine’s body orally or nasally, the virus lands itself in the lymph nodes (2). Incubating for two days there, the virus reproduces in lymphocytes. Lymphocytes, white blood cells maintaining a round nucleus, pertain to the lymphatic system. The lymphatic system aids in the circulation of blood throughout the body and may lead to detrimental effects when this system begins to deteriorate. Neutropenia, which is the lack of neutrophils in the body, will also result. While some of these lymphocytes begin to die, known as lymphopenia, others travel through the bloodstream with the parvovirus (2). The virus may then continue to spread to newer, healthier blood cells — among other rapidly dividing cells — within the body.

Eventually reaching the gastrointestinal tract, the virus attaches itself to the villi and continues replication on the epithelial intestinal lining. The invasion and rapid replication of CPV-2 deprives the gastrointestinal tract of nutrients and prevention fluid leakage (2). Within the small and large intestine, the smooth muscle surrounding the lumen is lined with folds that hold the intestinal glands within the grooves. The glands, called Lieberkühn or intestinal crypts, allow for the essential, rapid creation of new cells (2). The virus, invading the crypts, dismantles the body’s ability to replace the old cells; this may lead to mesenteric lymph nodes, crypt architectural deterioration, crypt necrosis, and villous atrophy (Figure 2) (3). Failure to absorb proper nutrients and prevent fluid loss also leads to the spread of the gut microbiome. These three things ultimately damage the intestinal surface to such an extent that it can no longer properly function. Moreover, necroscopic lesions scar and damage the intestinal surface, thickening and discoloration the lining (3). In addition, CPV-2 leads to myocardial infection, and ultimately myocarditis and cardiac failure, as well as bone marrow degradation (2). Within the bone marrow, the virus further weakens the white blood cell count, which gives it more of an protective advantage when entering the gastrointestinal tract.

Symptoms of canine parvovirus type 2 have a rapid onset and can be extremely contagious to others. Within days, the intestinal wall has weakened and can take five days to begin to regrow. The period of time without the immune system leads to a inflammation, internal bleeding, lack of digestion. Due to lack of digestion and lack of fluid loss into the stool, severe dehydration is a common symptom of CPV-2. In fact, dehydration becomes one of the greatest life-threats in canines with parvovirus. Other signs and symptoms include the following: sudden onset of fever, lethargy, altered mental status, malaise, loss of appetite, as well as hematemesis and bouts of foul-smelling diarrhea (6). Bacterial infections are also possible and may lead to sepsis. Electrolyte imbalance, such as a lack of potassium, is also possible. Potassium is an essential electrolyte that relays the heartbeat and is involved in muscle contractions. Cardiac arrest may result from a lack of potassium among other electrolytes. Movement also becomes increasingly difficult for canines who have contracted the virus. 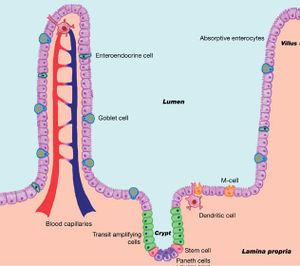 Newly identified strains of canine parvovirus strain type 2 have been discovered, including CPV-2a, CPV-2b, and CPV-2c. CPV-2a is an antigenic variant of CPV-2, first discovered in 1979. CPV-2b is another strain that is most likely derived from the CPV-2a variant and is now the most common strain of canine parvovirus in North America (5). In fact, these variants have begun to take over CPV-2 as CPV-2 has begun to disappear (8). In fact, the CPV-2a and CPV-2b antigenic variant strains had become the predominant stains in 1984 (3). Most recently, however, another variant known as CPV-2c has mutated from of the CPV-2 strain and has been observed in Italy, Australia, Asia and fifteen North American states since 2000 (5). This is due to an amino acid substitution in the VP2 protein that alters the Aspartic acid on the base pairs (8). Viral shedding of a host’s fecal matter continues until the disease has been cured and is an advantageous way for the virus to expose itself to other hosts. Research suggests that the mutation occurred to better stabilize the virus in outside environments and to adapt itself to the feline species, allowing it to replicate within feline tissues (8).

Arguably, the CPV-2c antigenic variant is not a virulent as the other strains in canines (5). Rather, overriding CPV-2a and CPV-2b strains, this newer variant may present itself in both canines and felines and also has the potential to replace FPLV disease in felines (8). Though CPV-2a and CPV-2b have been observed in some domestic felines in southeast Asia, its pathogenicity is relatively low and does not affect the feline as severely (9). CPV-2c and FPLV show a decrease in white blood cells, or leukopenia, similarly to CPV-2 (8). In response, virus-neutralizing (VN) antibodies develop. The amount of VN antibodies is lower in feline test subjects inoculated with CPV-2c compared to felines inoculated with FPLV or CPV-2a (Table 3) (8). Mild infections of CPV-2c shows that the newer variants are increasing in pathogenicity (8). Research continues to track this newly developed variant in order to create a vaccine that can resist the pathogenic virus. Research continues to specialize on the VP2 protein, monitored for efficacy and other mutations that strengthen the disease (10). This is because the main structural protein, VP2, also plays a significant role in viral-host interactions (11). 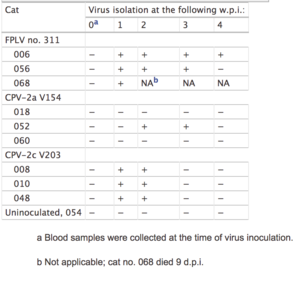 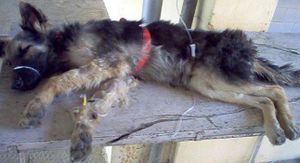