Difference between revisions of "The Plague"

What is the Plague?

The Plague is a deadly epidemic disease that is transmitted to humans by fleas that are carrying bacterium Yersinia pestis. Natural reservoir for Y. pestis is a rodent, and fleas serve as a vector organism to spread the disease. When an infectious fleabites human, Yersinia pestis enters blood stream and is drained to lymph nodes, where it multiplies. Typical symptoms appear after 2-6 days of infection, and these symptoms include swollen lymph nodes, along with headache and sudden onset of high fever. Because of the visible lymphadenopathy, or bubos, such plague is categorized as bubonic plague. This type of plague is thought to be the cause of the Black Death, a pandemic in 14th century that reduced European population by 30%. Still in these days, about half of the patients presenting bubonic plague symptoms die [15]. Septicemic plague is another type of plague symptom that may occur after or without showing bubonic plague symptoms. It occurs as Yersinia pestis population grows in bloodstream, which triggers massive immune response and then deadly septic shock. About 50% of septicemic patients die [1]. Pneumonic plague is the least common type of plague, but human to human transmission can occur when a person inhales infected aerosol droplet. Most infected people with pneumonic plague do not survive due to incubation period that may be as short as 18 hours. Symptoms include severe pneumonia, shortness of breath and high fever [16].

Clinical representation of the effects of the the bacterium Y. pestis [17]

Yersinia pestis was first identified as a Gram-negative bacterium by Alexander Yersin in 1894 [4]. Since then, three biovars (strains that differ physiologically or biochemically) have been identified for Yersinia: Biovar Antiqua, which was responsible for the Justinian plague, biovar Medievalis, which was responsible for the Black Death, and biovar Orientalis, which is responsible for the current pandemic in the east [4]. Yersinia refers to a genus of bacteria in the Enterobacteriaceae family. Yersinia are rods and share many characteristics with Escherichia coli. Of the eleven species of Yersinia, only three are agents of human disease. The only species to cause acute death is Yersinia pestis. The other two, enterocolitica and pseudotuberculosis, cause mild chronic enteric infections [2]. Some striking differences of Yersinia, which separate it from its members of the Enterobacteriaceae family include a lack of glucose-6-phosphate dehydrogenase, resulting in the use of transketolase and transaldolase for pentose synthesis, and a lack of a complete Kreb’s Cycle, evidenced in a glyoxylate bypass mechanism and a lesion in alpha ketoglutarate dehydrogenase [3]. Yersinia can grow on media at temperatures ranging from 5 to 42 degrees celcius, but once the temperature is changed from room (26) to host (37), Y. Pestis changes its gene expression, resulting in a demand for additional nutrient requirements and the production of virulence functions [3]. Although originally thought to be unable to invade epithelial cells, recent studies have shown that Yersinia pestis may invade the lung-associated lymphoid tissue and cause systemic disease [5]. Yersinia pestis posseses an approximately 100 kB plasmid that facilitates survival in the flea (its transmission host), plus an approximately 10 kB plasmid encoding a plasminogen activator that promotes tissue invasiveness associated with acute disease [2]. Targeting these plasmids is an effective method of neutralizing the pathogenicity of Yersinia pestis [2]. The genome sequence of Yersinia pestis reveals characteristics of a bacterium which has undergone a number of evolutionary lifestyle adaptations [4]. These characteristics include a large population of insertion sequences, the presence of many pseudogenes, and a significant level of genomic rearragnement [4]. In addition, horizontal gene transfer is evident on many chromosomal loci of the bacterium [4]. 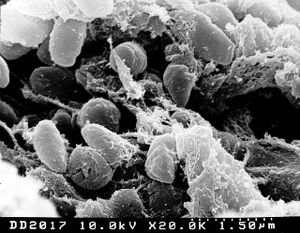 Why is this disease a problem in China?

Yersinia pestis is far from being eradicated and has spread through countries worldwide. The pathogen’s long term survival is mainly credited to its ability to thrive in over 200 species of wild rodents [6]. Most developed countries have reduced the occurrences of the plague by controlling rodent populations in both urban and rural areas [7]. However, China has been unable to accomplish this. As a result, natural populations of rodents and fleas have been able to flourish and ultimately increase the risk of infecting human inhabitants. A recent sign of this event took place between July and August of 2009. Twelve people in Ziketan of the Qinghai province contracted the pneumonic plague. It resulted in three deaths [8] and the quarantine of the entire town. According to the World Health Organization, it originated from a wild marmot (a rodent species) that transferred the disease to a dog through a flea which then transferred it to its owner through close contact. Yersinia pestis, therefore, continues to be an issue in China today due to its lack of proper control over rodent populations. However, it is likely that the lack of control over the natural reservoirs of rodents is not the sole contributor to the pathogen’s prevalence. It is suspected that climate changes have played a role in it as well. Specifically, it has been reported that increased cases of the human plague have been connected to global environmental changes, such as ENSO (El Niño-Southern Oscillation). In China, changes in ENSO have been reported to correspond to increases of precipitation and warm temperatures, which are favorable conditions to facilitate rodent outbreaks and human plagues [9]. 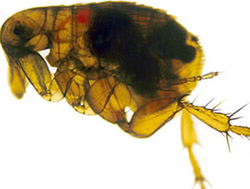 Xenopsylla cheopis flea infected with Yersinia pestis. The anterior of the flea's gut is blocked by a Y. pestis biofilm, which is prerequisite for efficient transmission. [13]

What is being done to address this problem?

Since the recent outbreak of the pneumonic plague that has taken the lives of three people in the small town of Ziketan, province of Qinghai, China, in early August of 2009, the government of China has taken strides to control and prevent the spread of this infectious lung disease [10]. Due to fast response, the Health Bureau of China was able to quarantine the town of 10,000 to prevent the spread of the plague. In addition, anyone who experienced a fever or cough was warned to seek medical treatment. Not only has China responded quickly in health scares, they have made further strides in protecting their people from infectious diseases and preparing themselves for a pandemic if one should occur by partnering with the World Health Organization to create China’s Communicable Disease Surveillance and Response Team. Because 70% of the infectious disease stem from animals, together their main focus is the strong connection between the human-animal interface and public health implications [11]. To be effective, China also understands the importance of communication with the government, other health partners, international community, and the media. To prevent and take control of this virulent bacterium, Y. pestis, researchers in China have made progress in studying its pathogen. Focusing on the Qinghai province where cases are predominant, they were able to successfully isolate 8 types of genome among 80 strains of Y. pestis [12]. By understanding the disease’s bacterium, this aids China in developing programs to avoid and eliminate future deaths.

Researches on vaccinations to improve prevention?

Because of high virulence and possible use of Yersinia pestis for bioterrorism, discovery of an effective human vaccine is crucial. Numbers of plague vaccines are being tested on animal subjects to provide quick and prolonged immunity against this deadly disease. One of the studies showed that the potency of Y. pestis is caused by its ability to use LPS-lipid A to induce poor toll like receptor 4(TLR4) response. When the mice were vaccinated with nullified Y. pestis with modified lipid A, they developed immunity against both subcutaneous and respiratory tests by wild type Y. pestis [18]. However, there is a small chance that such nullified bacterium may mutate and become virulent, and therefore, tests on human subjects are not yet being implemented Because of such danger, there are other researchers testing out effectiveness of virotherapy instead of nullified Y. pestis. One study demonstrated that they can insert a gene that codes for V-antigen, which is one of the virulence factors in Y. pestis, into a specifically designed adenovirus that is replication deficient. The result showed a rapid increase in T cell count in mice subjects after few days of single injection, indicating a strong developed immunity against Y. pestis antigen [19]. Such method, however, would be ineffective if the patient was already infected because the onset of plague occurs within a day or two. Currently, there is no approved vaccine against plague in the USA. This is chiefly due to the danger of its high lethality and transmission rate, which makes a clinical trial nearly impossible. Additionally, its prevalence being mainly in developing countries discourages development of a new pharmaceutical vaccine. If an outbreak were to happen in a densely populated country, there certainly will be a deadly consequence, and it will be too late to create a vaccine for the plague then.