Giardia lamblia is a common pathogen found in contaminated areas including water and feces. They have several other names such as G. duodenalis and G. intestinalis. They are the most popular parasite diagnosed in the intestines (https://microbewiki.kenyon.edu/index.php/Giardia). It is the cause of giardiasis. It has four flagella, two for each nucleus. Its tear drop shape allows for the two nuclei to fit. The trophozoite can survive a long time outside the host until it is under stress. The parasite then goes through differentiation where the cyst turns in to a trophozoite (Foster and Slonczewski 2016). The parasite is a problem in water communities around the world, but popularly in day care centers. Antoine van Leeuweenhook first described it in 1681. It was originally named Cercomonas intestinalis by Lambl in 1859 until Stiles changed it in 1915 to what we know now (https://microbewiki.kenyon.edu/index.php/Giardia). The parasite is not limited to only humans. Dogs, cattle, and other animals can also spread them. Developing countries experience many problems with Giardia due to the poor sanitation and hygiene.

Introduce the topic of your paper. What is your research question? What experiments have addressed your question? Applications for medicine and/or environment?
Sample citations: [1]

Contaminated water, food, or person to person contact allows the parasite to spread easily. The Giardia lamblia cyst or trophozoite is ingested in it lives in the intestines. However, the trophozoites die since they cannot withstand the conditions. Its hard-shell exterior allows the cyst to survive until it is triggered. It has two life stages: the dormant cyst stage and the trophozoite stage. It stays in the dormant cyst stage until it enters an environment of high pH such as stomach acid. Encystation and excystation occur in order to release the trophozoite and form a cyst when it hits the colon. After initial indigestion of the cysts, they go through the small intestine first. Excystation in the intestines releases two trophozoites. They can either move from the small intestine to the colon or attach to the mucous lining of the small intestine using their adhesive discs. If they go to colon, they then go through encystation. The cysts are dormant but still infectious in feces. This increases the transmission of the infection between people greatly (https://www.cdc.gov/parasites/giardia/pathogen.html). Depending on how great the infection is, the entire lining of the intestine could be lined with the trophozoite. 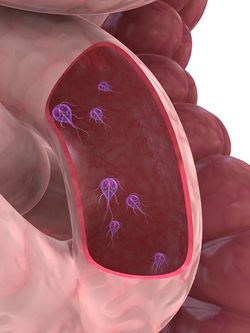 Giardiasis is a diarrheal disease that infects the intestines (https://www.cdc.gov/parasites/giardia/general-info.html). It is also called beaver fever because most of the cases of the infections come from beavers. In an experiment done by Duffy et al. determining the prevalence of Giardiasis in children in Brazil using detection test, they found that children with low zinc, iron, and vitamin A are most vulnerable to the infection. It could take weeks or months until it is triggered. As few as 10 cysts can infect a person. If infected, the person experiences diarrhea, gas, greasy stool, stomach cramps, nausea, and dehydration. However, some can be infected and not experience any symptoms. The infection lasts about two to six weeks. It is found in the soil, contaminated water and food from infected humans or animals, or surfaces. The parasite infects those orally. Polis et al. found that the some of the outbreaks found in the United States were from water sources contaminated by beaver feces being the host[2]. 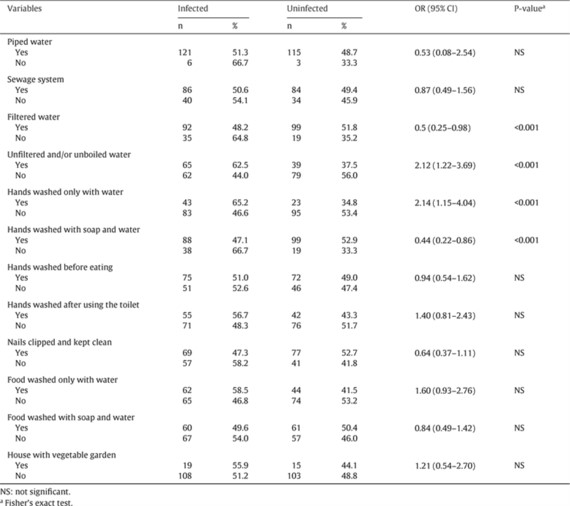 Besides industrial areas and developing countries, the transmission of the parasite is very vulnerable in day care centers (Santos et al. 2012). The lack of hygiene in infants and toddlers make them potential carriers of the parasite. The amount of contact they make with others makes it easier to spread the infection. Ingestion of Giardia by touching changing tables, diaper bags, toys, or bathroom handles that have contaminated feces on them increases the chances of getting the infection in the center (https://www.cdc.gov/parasites/giardia/general-info.html). Children exposure to contaminated water and food are also sources of the parasite. If the child ingests either contaminated water or food, the parasite will survive in their body contaminating their feces. Contact with other children in the day care increases the likelihood of infection due to their poor hygiene. However, the likelihood of the caregivers receiving the infection is lower because they have better hygiene than children. Polis et al. performed one of the earliest diagnosis of the parasite in day cares during the major outbreak in the 70s and 80s. They found that the parasite is transmitted through people to people contact, more specifically child to parent contact. They observed that most of the children who were infected were those who were not toilet trained. However, they found that not only does overcrowding and poor sanitation lead to the infection, but the people to people contact spreads the infection. This was shown through their control group that they had used who ended up getting the infection. They concluded that Giardia was symptomatic (Polis et al. 1986).


In developing countries, the likelihood of a child getting giardiasis in day cares is high due to the poor hygiene and sanitation of the city. In an experiment performed by Santos et al., they looked at the prevalence of the Giardia parasite and others in children who go to public day cares in southeastern Brazil. Not only did they test the children in the center, but they also tested those who live in their household, their pets, and the caregivers who handle the food. By using PCR to diagnose the infection, they looked at those who had a very large quantity of cysts; the more of the cysts, the better the amplification. They found that Giardia parasite was the most dominant. The children and those who handle the food were most at risk for the infection. The crowded conditions and the poor hygiene make it easy for the children to spread the parasite between each other. This also demonstrates how other pathogens spread among children. Those that handle the food are at risk because of the poor hygiene used to prepare meals for the children. If proper care is not taken when handling food, the parasite can easily be spread. They did not find the infection in the family members or in the pets showing that the parasite is spread through people interaction (Santos et al. 2012).


In an experiment performed by Duffy et al., they looked at the different methods of testing the spread of the infection in day cares in Guatemala by using three methods: light microscopy, enzyme-linked immunosorbent assay (ELISA), and rapid dipstick method. Two samples were also used two samples to determine if the infection had passed or if it was in the dormant phase of the cycle. They found that the rapid dipstick method would be best in rapid screenings. They are sensitive to the cysts and can handle the larger spread of the cysts. On the other hand, the ELISA method found many more infections in the samples than the other two methods. This could be that it was more sensitive to the cysts even though it could not handle patients who have a larger spread of the cyst infection. The absorbance level of the test is not high enough to test larger quantities of the cyst (Duffy et al. 2013).

Giardia is observed by testing the stool samples. Duffy et at. used light microscopy, ELISA, and rapid dipstick method to diagnose the disease (Duffy et al. 2013). Santos et al. used PCR amplification, and Polis et al. used a direct smear test (Polis et al. 1986). Cyst or trophozoites are tested to determine the infection. Duffy and Santos both wanted samples that had a large quantity of cysts in them to show how much the infection has spread. It was not stated how Polis observed the stool samples. There are several methods in order to treat Giardia. At the moment, metronidazole, tinidazole, and nitazoxanide are used (https://www.cdc.gov/parasites/giardia/treatment.html). Other treatments for the infection are nation specific but still are effective. Children are given furazolidone because it can be suspended. Metronidazole is the most popular used, but there has been some drug resistance in all the methods. Peptide antibiotics and new methods have been used to combat the resistance. Practicing proper hygiene such as washing hands in daycares will prevent the spread of Giardia. Keeping children that have acute diarrhea at home is the best way to contain the parasite. To maintain an environment free of the parasite, disinfection of the play areas including toys that have been in mouths, and washing hands after changing diapers. Those who prepare food should not change diapers without washing their hands (https://www.daycare.com/fastfacts/illness/giardiasis.html).