The microbial mechanisms involved in the pathogenesis of Inflammatory Bowel Disease. 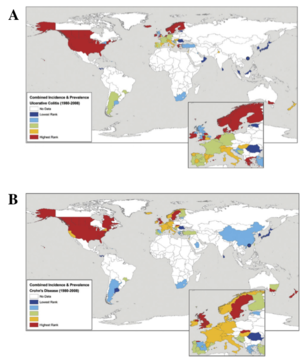 Figure 1. The incidence and prevalence of (A) ulcerative colitis and (B) Crohn’s Disease is increasing worldwide with the highest risk to individuals in North America. [25]

Inflammatory bowel disease (IBD) is a chronic illness that results from the impaired regulation of inflammation in the mucosal layers of the intestines [1]. There are two forms of IBD: Crohn’s disease (CD) and ulcerative colitis (UC) [2]. The study of IBD pathogenesis is becoming increasingly important as its incidence is highest in North America and is increasing worldwide (Figure 1) [3]. It has been found that genetics, environmental factors, and the composition of normal flora may increase the susceptibility of individuals to IBD [2][4]. Pathogenic Escherichia coli is a known bacterial cause of IBD. The microbial mechanisms of certain E. coli strains enhance their pathogenicity, which contribute to the initiation and development of IBD [5] [6]. Furthermore, the interactions between commensal bacteria of the normal flora and host cells contribute to the chronicity of IBD [5].

Figure 2. The adhesion and accumulation of commensal bacteria on the intestinal mucosal layer resulting in the formation of the gut normal flora.

The intestines are comprised of an epithelial layer, which acts as a physical anatomical barrier, and a mucosal layer [7]. Bacterial colonization of the intestines begins after childbirth. The factors that affect the composition of gut normal flora include the type of birth, the environment in which the child is born, and the diet. The bacteria that first colonize the intestines can silence genes in the epithelial cells thus creating favourable conditions for their growth and further inhibiting the growth of other bacteria [8]. This encourages the development of the galt-associated lymphoid tissues (GALT), a secondary lymphoid organ [9]. Furthermore, there exist higher concentrations of commensal bacteria in non-inflamed intestinal regions of IBD patients than in inflamed [10]. This suggests that the commensal bacteria may protect unaffected intestinal areas of IBD patients from inflammation [11]. This protection may prevent pathogenic bacterial colonization in the form of increased peristaltic activity or through the creation of unfavourable environments for the pathogenic bacteria [12]. An example of bacteria that are common to the gut normal flora include the E. coli K 12 strain. E. coli K12 are commensals that play a role in resisting the colonization of pathogenic bacteria [13]. 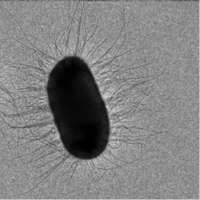 Despite the protective nature of the gut normal flora, there are many cases whereby pathogenic bacteria can invade the intestinal epithelial layer and cause disease. Though E. coli K12 is a commensal strain, there exist adherent-invasive E. coli (AIEC) strains that are known to contribute to IBD initiation and development. AIEC strains differ from E. coli K12 through physiological mechanisms that alter the pathogenic nature of the bacteria [14].

The type 1 pilus is a vital virulence factor that allows bacteria to adhere to host cells [15] [16]. In AIEC, the sigmaE pathway promotes type 1 pilus expression [17]. Therefore, interactions between intestinal epithelial cells and AIEC are enhanced, leading to adhesion of AIEC and increased biofilm formation [18]. Furthermore, the orientation of type 1 pilus of AIEC differs from the E. coli K12 strain and is regulated by various mechanisms. The expression of fim genes is induced by Fis histone-like proteins. When Fis proteins bind to Fis-binding sites, the transcription of fim genes such as fimE is initiated. The FimE recombinase is responsible for regulating the on- and off-phases of the type 1 pilus. It has been found that fimE expression is significantly downregulated in the AIEC strain. This results in an increase of on-phase oriented type 1 pili on the outer membrane [19]. In addition, DsbA is a periplasmic oxidoreductase that catalyzes disulfide bond formation between cysteine residues. In turn, DsbA promotes on-phase type 1 pilus orientation through posttranslational modification [15]. The increased expression and favorable orientation of type 1 pilus enhances the adhesion of AIEC to epithelial cells. 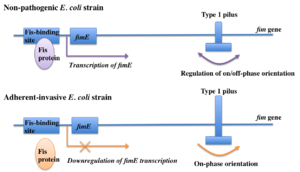 Figure 4. A comparison of the regulation of type 1 pilus orientation in non-pathogenic and pathogenic E. coli, as a result of fim gene expression.

Differing physiological mechanisms of AIEC not only enhance its ability to adhere to the host, but also to invade the intestinal epithelial cells. The AIEC strain has enhanced outer membrane vesicle (OMV) formation thus leading to the delivery of more virulence factors to the cell membrane via exocytosis [20]. Outer membrane proteins OmpA and OmpC are present on the OMV membranes [21]. Upon exocytosis, these proteins are transferred to the outer membrane of AIEC cells. OmpA is responsible for binding to a protein, Gp96, located on the intestinal epithelial cells [22]. Meanwhile, OmpC is responsible for activating the aforementioned sigmaE pathway, resulting in increased expression of outer membrane proteins and type 1 pili [23]. With the increased secretion of virulence factors by OMV formation and movement, the tight binding between OmpA and Gp96 promotes the ability of AIEC to invade the cells and cause disease [22].

Figure 5. Outer membrane vesicles transport OmpA to the surface of AIEC via exocytosis, leading to the tight binding of OmpA to Gp96 on the epithelial cell surface. The invasive ability of AIEC is enhanced by this interaction.

Following invasion of the intestinal epithelial cells, the AIEC has mechanisms that allow it to evade intracellular macrophage killing. DsbA, a periplasmic oxidoreductase, is activated in nutrient-deprived environments such as the phagolysosomes of the macrophage. Bringer et al. suggests that the catalysis of disulfide bond formation by DsbA activity prevents the accumulation of unfolded proteins in the cytoplasm, which would otherwise lead to cell death [15]. In addition, AIEC promotes the secretion of TNF-α by macrophages, which suppresses the function of host immune cells. Furthermore, increased amounts of TNF-α promote the intracellular replication of AIEC. As a result, AIEC not only evades intracellular cell death, but also creates an immunosuppressive environment that can promote its intracellular replication [24].

There are many microbial processes in pathogenic AIEC that contribute to IBD initiation that are still not completely understood. Furthermore, the AIEC strain is not the only pathogenic bacteria responsible for IBD. Further research must be performed to better understand the microbial mechanisms that cause the pathogenesis of IBD. With this knowledge, better preventative measures can be taken to suppress the incidence of IBD.