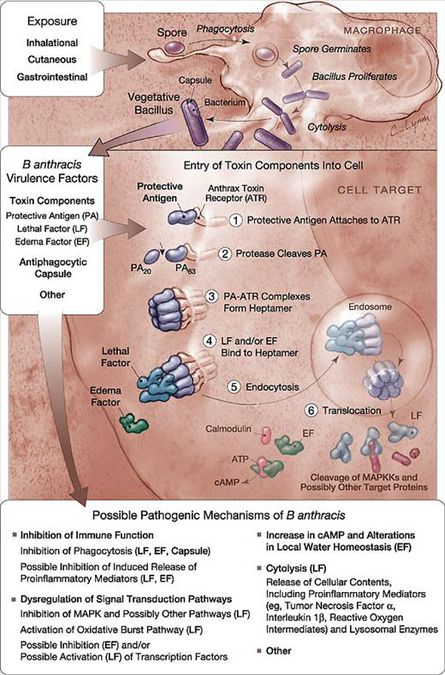 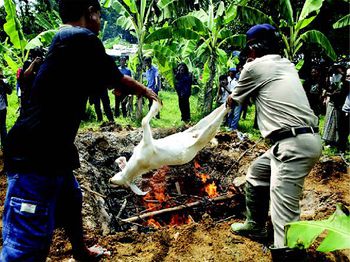 The common ways of transmission of the anthrax disease are through wounds, the pharynx, gastrointestinal tract, the digestive system after ingesting spore contaminated food or water, skin lesions or abrasions caused by biting flies and the breathing in of air containing anthrax spores. After transmission through one of these route, the spores travel to the lymph nodes where they begin to multiply rapidly and the produce spores which germinate to produce the virulence factors (13). The disease can infect humans in 3 different ways namely the cutaneous anthrax, the pulmonary or inhalation anthrax and the gastrointestinal anthrax. Each type of anthrax disease is unique in its method of infection and symptoms. The lethal dose of inhalation anthrax in humans is approximately 8,000 to 10,000 spores, however, scientists have revealed that little dosage inhaled did not cause or show symptoms of the disease(23). Transmission of anthrax between animals occurs when infected animals are placed in the same environment as healthy animals. Proper prevention measures in mostly agricultural settings include proper disposal of infected animals, polluted equipment and vaccination (Figure 5).

Out of many pathogenic bacteria, Bacillus anthracis is one that can be used for bioterrorism. Of its three types (cutaneous, inhalation and gastrointestinal), inhalation anthrax has been related to bioterrorism because of its mode of transmission. Bacillus anthracis makes a good model weapon for bioterrorism because its spores can be produced in the laboratory,it survives longer in the environment and can be found easily. Also, because of its small size, it can be placed in food and letters like in 2001 when powdered anthrax spores were mailed to the U.S postal office. Twenty-two cases of anthrax infections were confirmed. Half of these cases involved cutaneous anthrax and no death resulted. The remaining eleven were identified as inhalational anthrax and produced five deaths. Several countries like the past Soviet Union and Iraq have been known to produce Bacillus anthracis as a bioweapon (22). Aside from inflicting this pathogenic bacteria through letters, aerosol delivery can also be implemented. It entails aiding the bacteria to travel a longer distance while keeping it odorless and unseen before release by the use of technology (22). A global awareness should be created to reject the development of anthrax as weapons and provide a better means to fight this deadly disease. Agencies and organization should emulate the work of agencies such as the Centers for Disease Control and Prevention, the Federal Bereau of Investigation and even the World Health Organization to find a better understanding of this deadly disease and ensure the safety of human and animal lives, and property.