Difference between revisions of "Thermococcus"

A Microbial Biorealm page on the genus Thermococcus 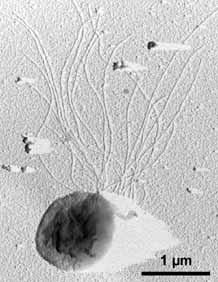 Thermococcus is an obligate heterotroph, strictly anaerobic archaeon which grows on organic substrates, primarily in the presence of elemental sulfur (S°), which is reduced to hydrogen sulfide. The genus contains the highest number of characterized isolates. It is highly motile with a polar tuft of multiple flagella. The archaeon grows between 60-100°C, with an optimum temperature of approximately 85°C, and between 5-9 pH (optimum = 6.5). As more genomes of the species are sequenced, it is expected to encode genes responsible for various cellular functions that provide an advantage for these organisms natural high-temperature habitats.

T. kodakaraensis has been reported as Pyrococcus sp; however, its complete DNA sequence clearly shows its distiction from its relative.Its circular genome is 2,088,737 bp in length with no exochromosomal element, and contains 2,358 coding sequences (CDSs), of which 2,306 have been identified.Of those CDSs identified, 261 are unique to T. kodakaraensis with no significant homology to any known sequences up to date. Also, its G+C content (52%) is much higher than that of Pyrococus species (40-44%), which is a well-known difference between the two genera.

The cells of Thermococcus kodakaraensis are irregular cocci of 1-2 µm in diameter, and multiply by constriction. Its cell envelope consists of two layers.

Elemental sulfur (as a terminal electron acceptor) is required for heterotrophic growth on yeast extract, tryptone, peptone, and free amino acids (which produces hydrogen sulfide), but not in the presence of sodium thiosulfate pentahydrate, sodium sulfate, sodium nitrate, sodium nitrite or ferric chloride hexahydrate. However, it is able to utilize maltooligosaccharides, cyclodextrins, starch, or pyruvate in the absence of elemental sulfur (which produces molecular hydrogen).

The study by Fukuda et al] raises the possibility of the involvement of malic enzyme in carbon metabolism. Currently, it is understood that malate and fumarate are metabolically isolated in the meta-bolism of T. kodakaraensis because linkages between malate and OAA (malate oxido-reductase) are missing in the pathways deduced from the whole genome analysis.

The strain of T. kodakaraensis was isolated from a solfatara (102°C, pH 5.8) on Kodakara Island, Kagoshima, Japan. However, some of the other species, such as T. peptonophilus, are isolated from deep-sea hydrothermal areas. In either case, the genus is considered to play a major role in the ecology and metabolic activity of microbial consortia within hot-water ecosystems.