Difference between revisions of "Thermodesulfobacterium"

A Microbial Biorealm page on the genus Thermodesulfobacterium 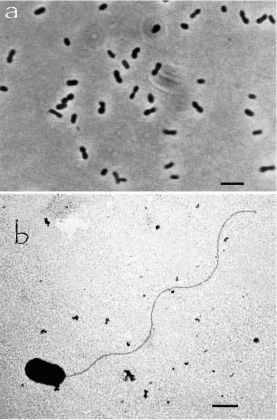 Thermodesulfobacterium commune expresses a unique type of dissimilatory sulfite reductase which is taxonomically distinct from that of related genera or other hyperthermophilic sulfate reducers.

Thermodesulfobacterium commune Strain DSM 2178. The type strain for this organism is being used for comparative genome analysis, and is not yet finished being sequenced. Click here for more information.

Significant ammounts of DPG bacterial core lipids have been found in T. commune; trace ammounts in T. hveragerdense. Note that it can contain either ether or ester linkages in the core lipids.

Non-N-methylated APT, which constitutes one of the major groups of IPLs in T. commune.
lipids RCM 2004.pdf Sturt et al

Sulfate reducers have a wide range of cellular morphologies, including rods, vibrios, ovals, spheres and even tear-dropped or onion shaped cells. Some are motile, others are not. Most sulfate-reducing bacteria are mesophilic, but a few thermophiles are known.

T. commune is hyperthermophilic, rod-shaped, anaerobic, has no motility, and no endospores. Interestingly, T. hydrogeniphilum is thermophilic, non-spore-forming, gram-negative, and it cells occur singly or in pairs as small, highly motile rods.

The most surprising fact concerning IPLs in these bacteria deals with Non-N-methylated APT (left, bottom), and came from a recent study. The presence of APT had not yet been documented for these two bacteria, and APT was considered extremely rare in the bacterial domain while reasonably common in archaea. It had been reported for the archaeal order Methanomicrobiaceae, which produce the N-methylated APT version; the only bacterial example to date has been a Hydrogenobacter thermophilus strain. However, the study found Non-N-methylated APT present in both species, and in T. commune APT constitutes one of the major groups of IPLs with a relative abundance of 22%. For more information on the interesting ramifications of this discovery click here and look at p.7.

Overall, Thermodesulfobacterium's habitat is generally observed to be aquatic. Isolated from volcanic hot springs, deep-sea hydrothermal sulfides, and other marine environments. This is thought to be because although sulfate reduction is thought to be an anaerobic process, sulfate-reducing bacteria (SRB) are also important in aerobic environments if they can proliferate in anaerobic zones. For example, in marine sediments and in aerobic wastewater treatment systems, sulfate reduction accounts for up to 50% of the mineralization of organic matter. Furthermore, sulfate reduction strongly stimulates microbially enhanced corrosion of metals.