Thermotoga is typically a rod-shaped cell enveloped in a outer cell membrane (the 'toga'). Thermotoga enzymes are known for being active at high temperatures. Thermotogales are extremely thermostable and therefore useful for many industrial processes such as in chemical and food industries (R. Huber et al., 2004). To learn about Petrotoga mexicana, a novel anaerobic, thermophilic, xylanolytic, motile rod-shaped bacterium (complete with a characteristic sheath-like outer structure or 'toga') that was isolated from a Mexican oil well in the Gulf of Mexico, go HERE. 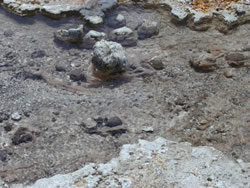