Difference between revisions of "Thermus aquaticus*"

A Microbial Biorealm page on the genus Thermus aquaticus*

Thermus aquaticus has proven to be quite a useful organism in the field of Biotechnology, as its enzyme Taq polymerase is harvested for use in polymerase chain reactions (PCR). The reason Taq polymerase is used in PCR, as opposed to other forms of the polymerase enzyme is because Thermus aquaticus' form of the enzyme is well-suited for the repetitive heating involved in PCR and will not denature. Taq polymerase's resistance to heat is an adaptation to its environment, but is not the only reason it is the choice for use in PCR. Taq polymerase is also chosen because it is incredibly accurate, at 1x10^-4 to 2x10^-5 errors per base pair [2], and does not need to be completely pure to be effective [3]. These properties of Taq polymerase- it's heat resistance, accuracy, and potency- make PCR, and technologies that utilize PCR, such as DNA fingerprinting, enzyme production, and medical diagnoses possible.

Several studies have agreed that the base pair composition of an average Thermus aquaticus DNA molecule is between 57 - 65% for G + C meaning that the corresponding base pairs of A+T, have a composition of 35 - 43%. DNA strains for T. aquaticus are naturally transferable which means that, under normal physiological conditions, they can be directly incorporated after they are taken up. The distinguishing feature of T. aquaticus's genomic structure is the 16s rRNA gene.III This is what differentiates it from all other thermophiles. Two studies have demonstrated that T. aquaticus has 4 plasmids (plasmids are circular DNA rings that contain the genetic instructions for the cell) while another study claims it to have 5 but the results differed between the colonies. In any case "coherent circular restriction endonuclease maps have been published for only 4," (160) [6].

The bacterial species Thermus aquaticus is heterotrophic in nature and, consequently, needs organic compounds from the surrounding environment in order to grow and sustain life. Some of the most common sources for organic material are as follows: the algal-bacterial mat, other heterotrophs, chemoautotrophs, and the surrounding soil. The algal-bacterial mat is an area at the surface of a hot springs environment containing decomposing organic matter, and is thought to be a major source of organic compounds for T. aquaticus. Another source is that of dead heterotrophs and chemoautotrophs already present in the bacteria's environment. It is also believed that organic matter is present in the runoff of the surrounding soil [6]. Thermus aquaticus belongs to the Deinococcus-Thermus group. It is one of the first hyperthermophilic organisms to be discovered. Their adaptation to high temperature may resemble that of ancient microorganisms, which existed in the first stages of the earth’s history.

Thermus aquaticus’ structure resembles that of other gram-negative bacteria. It has a three layered membrane composed of an inner plasma membrane, an intermediate and a rougher outer layer. Along the inner membrane usually lies a series of rod like structures that resemble individual cells, which are called rotund bodies. These cell like structures are the most unique characteristic of Thermus aquaticus. The rest of its anatomy is just like other bacteria. However, there are no flagella or cilia present in Thermus aquaticus, suggesting that this bacterium is immotile [1].

The life-cycle of this bacteria is just like the life-cycles of other bacteria. Thermus aquaticus reproduces asexually via mitosis which is a multiple step process in which the cell's organelles are duplicated and divided.

The temperature of an environment can be considered one of the most influencial factors in determining the composition of the specific ecosystem. For example geothermal springs have a very high temperature range, and, as a result, the organisms that live there must be able to cope with such conditions. Thermus aquaticus was first found in several of the Yellowstone National Park hot springs. It can survive at temperatures of 55-100 degrees Celsius in weakly acidic to alkaline (pH 5-9) waters. It was also discovered in marine thermal springs, low saline solfataric springs and thermally polluted waters. The ideal conditions for this organism to grow are around 70 to 75 degrees Celsius at a pH of 7.5 to 8 [4]. There are also some other environmental factors to consider, such as: the oxygen and nitrate concentration and the effects of light and salinity. Since these organisms exist at high temperatures, there is only a small amount of dissolved oxygen in the water. Because of this it is assumed that Thermus can use nitrate as their terminal electron acceptor instead of oxygen. It seems as though high concentrations of sulfide do not greatly affect the number of organisms. The degree of salinity does seem to affect them though. While there are some strains of Thermus that are halotolerant, there are none that are halophillic, and T. aquaticus is very sensitive to changes in salinity. Its growth is inhibited even if there is a 0.5% concentration of NaCl and cannot grow in any system with NaCl concentrations above 1% [6]. 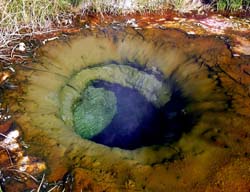 [7] This is a hot spring similar to the one that Thermus aquaticus was discovered in.

The enzyme Taq polymerase is found in the bacterial species Thermus aquaticus. It is a class 4 enzyme, which is the Lyase class of enzymes. A lyase is an enzyme that catalyzes the lyses of a substrate generating a double bond. Taq polymerase is a DNA polymerase that allows the bacteria to replicate at the high temperatures of its environment due to its thermo stability. It is because of this property that makes Taq polymerase such an important commodity. Every organism contains DNA polymerase enzymes vital to their replication, but most will be denatured at high temperatures due to their protein composition.

The DNA polymerase found in Thermus aquaticus remains stable even at very high temperatures. Because of this stability it can be used in the process known as the polymerase chain reaction, or PCR. PCR is a technique used to amplify a piece of DNA by in vitro enzymatic replication. During PCR the DNA that is supposed to be replicated serves as the template, it can be of various lengths, and in different forms, it is also possible to achieve genetic manipulations. To complete a Polymerase chain reaction one has to add primers (the starting and ending units), a DNA polymerase, the building blocks called Deoxynucleotide triphosphates, a buffer solution (to establish a chemical environment the polymerase will function in) and various cations. Once all these components are mixed together, the reaction tube is placed in a thermal cycler, which heats and cools the sample to achieve the various steps in the PCR process. First the temperature is brought up to 94 to 98 degrees Celsius, to split the DNA into single strands. After a cooling period, during which the primers are attached to the DNA and the polymerase to the primers, the reaction tube and its content is reheated to about 75-80 degrees Celsius, a temperature at which the polymerase is most active. It works from the 5’ to the 3’ end of the DNA to synthesize a new DNA strand at about a thousand base-pairs per minute. After the process is completed the sample is cooled to accomplish elongation, and can be stored at about 4 to 15 degrees Celsius. If one were to use any other polymerase, it would be destroyed during the extreme temperatures necessary to split the DNA in half. This is why Taq polymerase is so important; it can be used over and over again in this chain reaction.

The technique of PCR was developed by Kary Mullis in 1983. He received the Nobel Prize for this accomplishment ten years later. The first time Taq polymerase was purified was in 1976 by Chien et al. The first time it was successfully cloned and expressed in another organism was in 1989 by Lawyer et al in a strain of E. coli. PCR is today widely used in DNA cloning and manipulation, the analysis of gene functions and mutations, for the diagnosis of hereditary and infectious diseases, and identification of genetic fingerprints as used in forensic science and paternity testing.

"Investigations on the thermostability and function...[Protein Eng. 1997] -